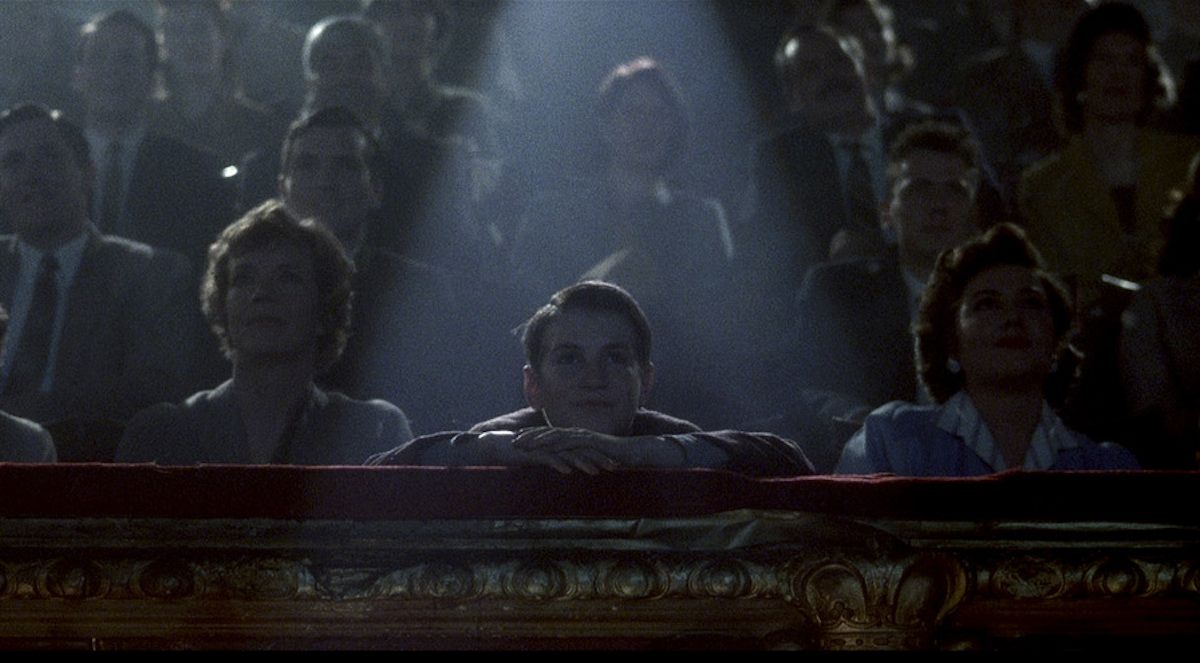 Terence Davies mined his own childhood for his first films, not so much for the story as for a child’s sensory experience growing up a sensitive child in Liverpool, a working class town with little sympathy for sensitive boys. The Long Day Closes (1992) is the third in his impressionistic trilogy but it stands on its own as a film, a singularly beautiful and poetic portrait of childhood.

Bud (Leigh McCormack), of a gentle, quiet schoolboy, looked over by an affectionate widowed mother (Marjorie Yates), is a stand-in for Davies in a fictionalized reflection on what Davies described as the happiest days of his life. Just like Bud, The Long Day Closes is in love with the movies. The still life of an opening credits sequence plays like an elegant tribute to the title sequences of films from the 1940s and 1950s. The classic 20th Century Fox fanfare ushers us into a drizzly Liverpool alley plastered in posters, a garbage-strewn dump turned romantic reverie as the camera seems to float through it all and studio lights gives even the rain a glint of movie magic.

There’s no traditional story to speak of. Rather, Davies offers snapshots of moments in his life at home, at school (where he is increasingly teased and bullied by bigger boys), at holiday celebrations (with neighbors singing and joking), and at the movies, where the camera lingers on his face, captivated by the screen, and we hear the soundtracks of such films as Meet Me in St. Louis and Great Expectations. Though they clearly have little money, it’s a happy time of life for them and Davies presents it through the glow of warm memory, as if reliving it in his mind.

The quality of light throughout is astounding, from the change of seasons to the passing of the day, the temperature shifting through changing weather, and the beams catching dust in the air, whether through a window in a room or the beam of a film projector in a theater. The exacting textures and delicate moods, sustained in heavenly beams of light and the reflection of warm memories, gives the film a glow I’ve never seen in another film.

For 85 minutes, Davies suspends us in the cradle of family and community and comforting memory. The specifics belong to Davies and his childhood in mid-fifties Liverpool but the evocation of comfort and affection and innocence in the thrall of movies and music and loving family is not beholden to any particular time or culture.

Also on Blu-ray and DVD and on SVOD through Amazon Video, iTunes, GooglePlay, Vudu and/or other services. Availability may vary by service.
The Long Day Closes (The Criterion Collection) [Blu-ray+DVD]

The film made its American disc debut on the Criterion Collection mastered from a restored 2K film transfer supervised by Davies and director of photography Michael Coulter. Much of the film’s experience comes through the quality of light and the texture of his recreations and this transfer brings them all to life. Features commentary by Davies and Coulter recorded in 2007, a 1992 episode of The South Bank Show profiling Davies and The Long Day Closes, and new interviews with executive producer Colin MacCabe and production designer Christopher Hobbs, plus a booklet.