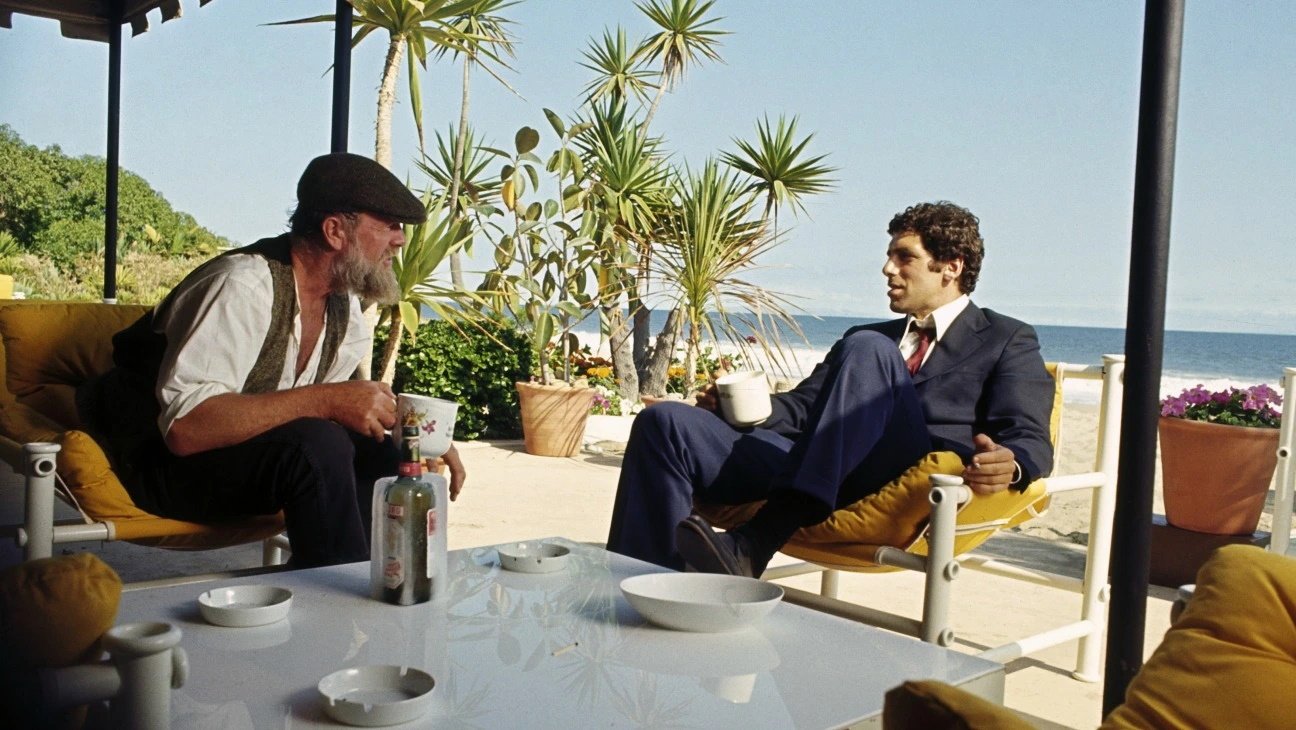 Elliot Gould is far from the ideal imagined by Raymond Chandler for his saint of the city Philip Marlowe—“Hey, it’s okay with me” is the mumbled philosophy of this rumpled PI in the 1970s LA—but he’s perfect for Robert Altman’s idiosyncratic adaptation of The Long Goodbye (1973).

Gould’s Marlowe is more wise-ass than wise guy, his lighthearted bantering playing like a goofy, playful 1970s version of the 1940s wisecracks of classic hardboiled film. In his rumpled suit and tie he’s an anachronism among the gangsters, hucksters, cops, and hippies of modern Los Angeles.

He goes to Tijuana to help a shady buddy (Jim Bouton) make a hasty run for the border, no questions asked, and slips into an expensive spa where the rich dry out and rest up to spring an alcoholic novelist (Sterling Hayden) for his worried (and much younger) wife (a brittle Nina Van Pallandt). The two cases get Marlowe tangled up with a brutal loan shark (Mark Rydell) who wants you know he feels genuinely sorry for his senseless displays of violence upon innocent bystanders. They are all superb but Hayden leaps out with a heartbreaking performance as the boozy, blustery Hemingway-esque writer under the thumb of a quack doctor (Henry Gibson), and his hearty, bearish presence slips from macho grandstanding to tragic vulnerability.

Chandler’s original novel was elegy for the L.A. private eye. Altman’s film, scripted and streamlined by Leigh Brackett (who helped adapt The Big Sleep for Howard Hawks), reimagines Philip Marlowe as the last of the old school detectives in a world that has moved on. His camera prowls incessantly as he searches for those unexpected details that keep his best work so rich and his characters never fail to surprise. Listen for the distinctive theme song, which composer John Williams weaves through the film in seemingly endless variations, from blues recordings to grocery store muzak and doorbell chimes.

What Altman and Chandler have in common is an interest of the culture of their very different L.A. worlds and the character of its players. Altman may have thought that his Rip Van Marlowe was a loser but, sense of humor and easy demeanor aside, he’s sharp, savvy, loyal, and dedicated to clients and friends alike, a rumpled knight in a cynical world on $50 a day plus expenses.

The Long Goodbye was a critical and commercial flop but has aged well. It’s witty, offbeat, idiosyncratic, filled with unexpected shifts in tone, and sui generis enough to challenge the neo-noir label. Yes, it’s more Altman than Chandler, but it’s great Altman that’s okay with me.

David Arkin costars as a slow-witted thug and Arnold Schwarzenegger has an unbilled but unmistakable appearance as a musclebound enforcer who strips down to his skivvies.

Add to My List on Criterion Channel or stream free on Hoopla, which is available through most public and college libraries.

, iTunes, GooglePlay, Fandango, Vudu and/or other services. Availability may vary by service.
The Long Goodbye [Blu-ray]

On Blu-ray and DVD from Kino Classics, which presents a 4K master in its 2021 special edition release. Features commentary by film historian Tim Lucas, interviews with David Thompson on Robert Altman, Tom Williams on Raymond Chandler, and Maxim Jacubowski on hard boiled fiction, archival featurettes “Rip Van Marlowe” and “Vilmos Zsigmond Flashes The Long Goodbye,” a reprint of a 1973 article from “American Cinematographer,” and Josh Olson’s “Trailer From Hell” short.