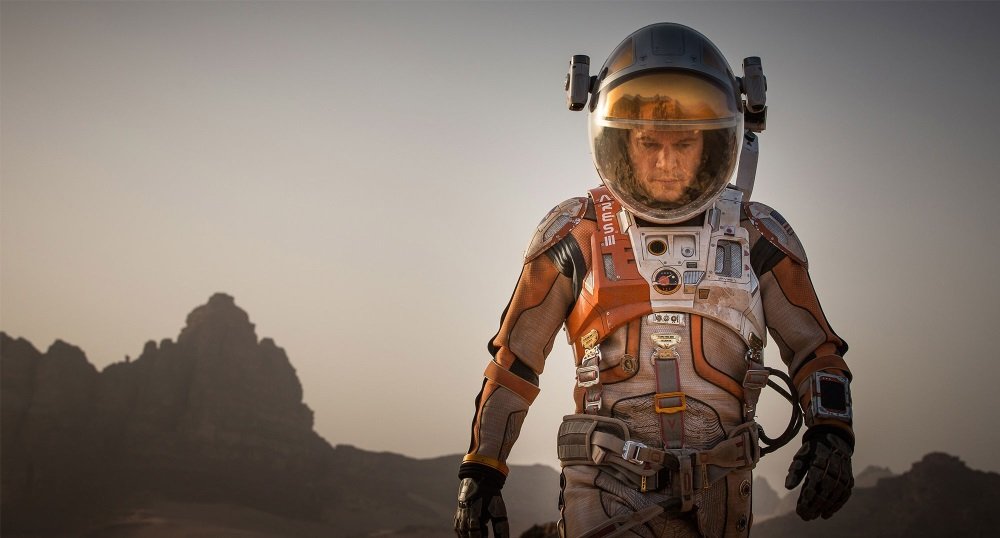 The Martian (2015), winner of two Golden Globe Awards and nominated for seven Academy Awards (including Best Picture and Best Actor for Matt Damon), is the rare science fiction drama that is actually built on applied physics and engineering and organic chemistry and where survival depends on creative problem solving and teamwork across millions of miles. This is a film that celebrates the triumph of intelligence and drive and, in its own way, it’s a true frontier adventure.

Matt Damon stars as Mark Watney, American astronaut on the first manned mission to Mars, stranded after a sudden storm sends the crew scrambling for lift-off. They think he’s been killed in the maelstrom, due mishap and mechanical failure, and he wakes up for find himself stranded on a planet without a breathable atmosphere and no return trip scheduled for a years. Watney is the mission botanist, which is useful in masterminding a way to grow food and produce oxygen and water, but that’s just one issue. As he explains in his regular video diary entries, “I’m gonna have to science the shit out of this.” It’s no spoiler to say he does. Meanwhile, after he jerry-rigs a primitive communications beacon to contact earth, NASA scrambles to find a way to bring him home and his crewmates (led by mission commander Jessica Chastain) on the long journey back home are faced with some hard choices.

What makes the film compelling is how director Ridley Scott makes his practical engineering so thrilling in its way, and how Damon’s easygoing warmth humanizes the ordeal. Those video diaries are a storytelling convention to be sure, an effective way to allow our castaway to communicate without restoring to voice over or talking to himself like a dotty madman, but they also show his loneliness, his isolation, his need to communicate, even if it’s with an audience that will ultimately view his entries as a posthumous legacy.

Drew Goddard (director of The Cabin in the Woods and screenwriter of World War Z), adapting the novel by Andy Weir, manages to make the science understandable (or at least relatable) and the teamwork palpable, and he sketches personalities for the increasingly expanding cast in quick strokes as the team—or rather teams—work together to solve each successive problem. There are crises along the way but nothing that feels contrived simply to grind out a cliffhanger and Scott finds a majesty in what could be mundane detail thanks to his masterful use of location (the desolation of the red-hued Mars is just alien enough to carry a threat in every shot) and treatment of his characters, all committed and talented people but never superhuman. This is an interplanetary survival story on a human level and a film that celebrates science and knowledge and collective effort. That’s admirable, of course, but it’s also involving and satisfying and genuinely inspiring, an epic story told with an intergalactic scope and an intimate focus.

On Blu-ray, DVD, and Digital formats. The discs include two production featurettes (“Signal Acquired: Writing and Direction” and “Occupy Mars: Casting and Costumes”) that run under 25 minutes combines, plus a gallery of stills and production art and a collection of faux documentaries and mock commercials from the future in which the film is set. The Blu-ray editions also feature a bonus Digital HD copy of the film.
The Martian [DVD]

Pingback: What to watch: 'Zootopia' on VOD and remembering Muhammad Ali - Stream On Demand
Comments are closed.