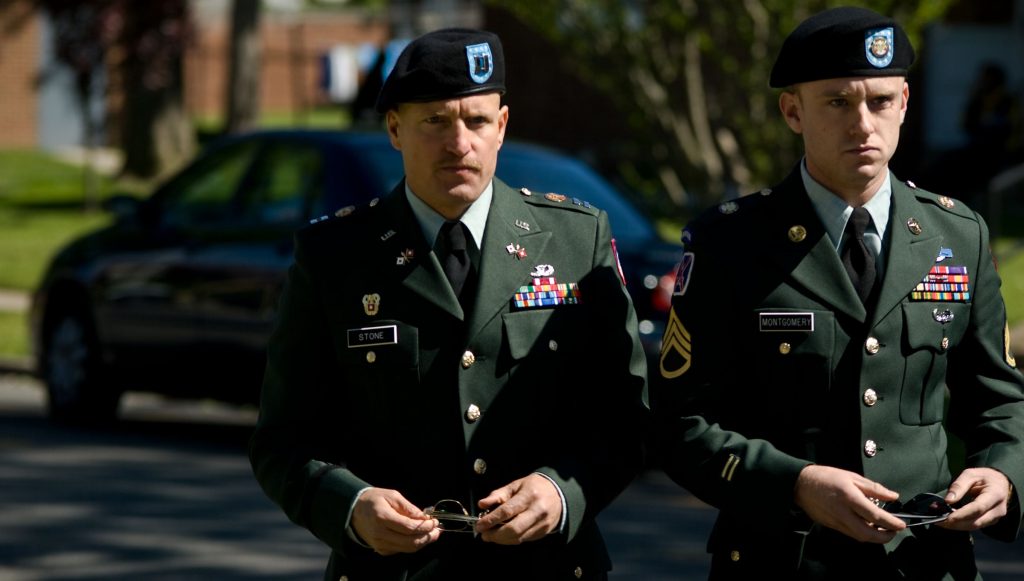 In The Messenger (2009), combat veteran Will Montgomery (Ben Foster) may be “a goddamn hero,” in the words of his commanding officer, but in the final months of his enlistment he’s assigned to the most challenging mission of his career: casualty notification and the emotional minefield of civilians dealing with the death of a loved one.

“There is no such thing as a satisfied customer,” explains his senior partner, played by Woody Harrelson as a complete professional on the job and a lonely, reckless mess off duty. They are the face of the United States Army in those terrible moments when loved ones are told words they never wanted to hear and faces reactions as varied as the people he meets: rage, blame, despair, denial, and in one instance a tender kindness from a confused widow (Samantha Morton at her most vulnerable) that stings deeper than any verbal or physical lash.

In his directorial debut, Oren Moverman (screenwriter of I’m Not There) offers a poignant story of men in uniform nursing wounds and haunted by loss (both physical and emotional) but unable to see another life for themselves, and a powerful perspective on the casualties of war. Steve Buscemi co-stars a grieving father reduced to blind rage. It didn’t get a lot of exposure in theaters but it was nominated for two Academy Awards: Woody Harrelson for best supporting actor (he won the Independent Spirit Award) and for Moverman’s original screenplay.

, iTunes, GooglePlay and/or other services. Availability may vary by service.
The Messenger [DVD]

On DVD from Oscilloscope, featuring commentary by director Moverman with producer Lawrence Inglee and stars Foster and Harrelson, a documentary on Casualty Notification officers, a behind-the-scenes featurette and an audience Q&A with the director and members of the cast and crew among the supplements.