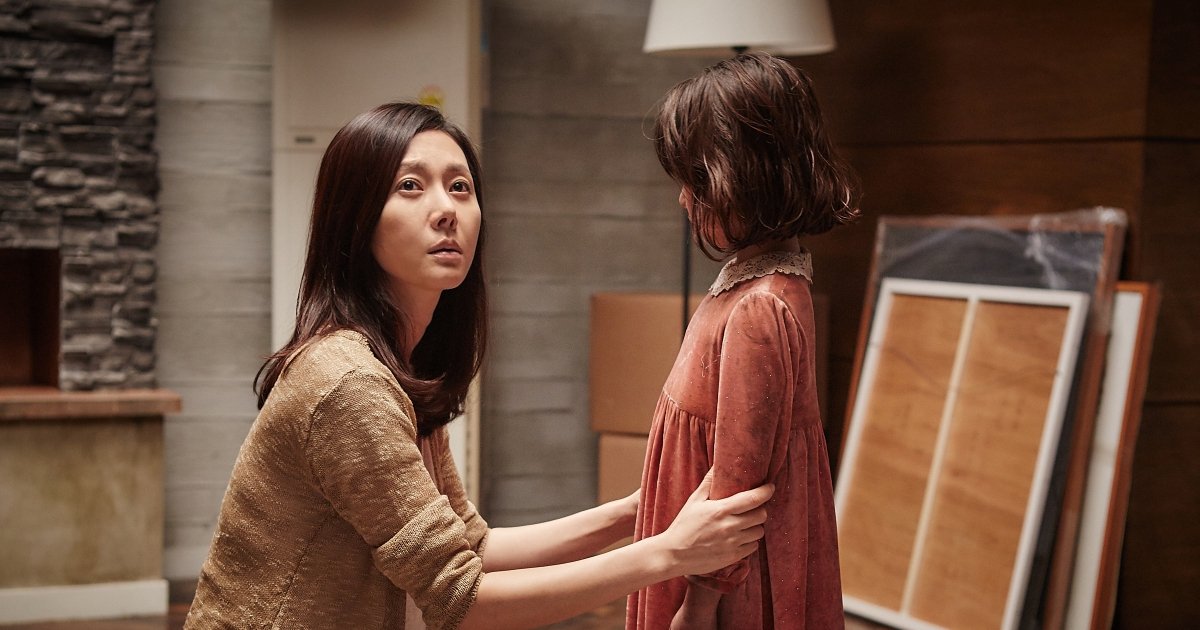 The ghost story The Mimic (South Korea, 2017) draws its premise a Korean myth of a tiger that mimics human voices to lure its victims into the forest, but it goes its own way from there.

Hee-yun (Yum Jung-ah), still grieving over the unsolved disappearance of her son, moves from the city to her rural childhood home with her husband and daughter, bringing her ailing mother (apparently in the early stages of dementia) to care for. Nearby, however, an old, bricked-up cave has been disturbed, releasing a scared and apparently abused little girl and an ancient evil spirit, which may be after her or using her to get to others. When Hee-yun takes the girl in, a demonic shaman enters their lives, using the voices of loved ones to draw them into the cave and mirrors to infiltrate their home.

There are some interesting dimensions to the film, which shuffles a number of familiar South Korean horror movie conventions together (from the creepy little girl who appears to be taking the place of the couple’s daughter to animals sensing supernatural evil). The film takes a while to get past the set-up and exposition and really engage the viewer but ultimately pays off in an impressive third act.

Filmmaker Huh Jung (director of the 2013 horror film Hide and Seek) favors atmosphere and eeriness over scares and spectacle and refreshingly makes the little girl lost into a more complex figure than she first appears. It makes for a satisfying piece of Asian horror with a creepy sense of dread.

Not rated, in Korean with English subtitles

Add to Amazon Prime Watchlist or to My List on Shudder. Also on Rakuten Viki and free on Hoopla, which is available through most library systems.

Also on Blu-ray and on SVOD through Amazon Video

, iTunes, GooglePlay, Fandango, Vudu and/or other services. Availability may vary by service.
The Mimic [Blu-ray]