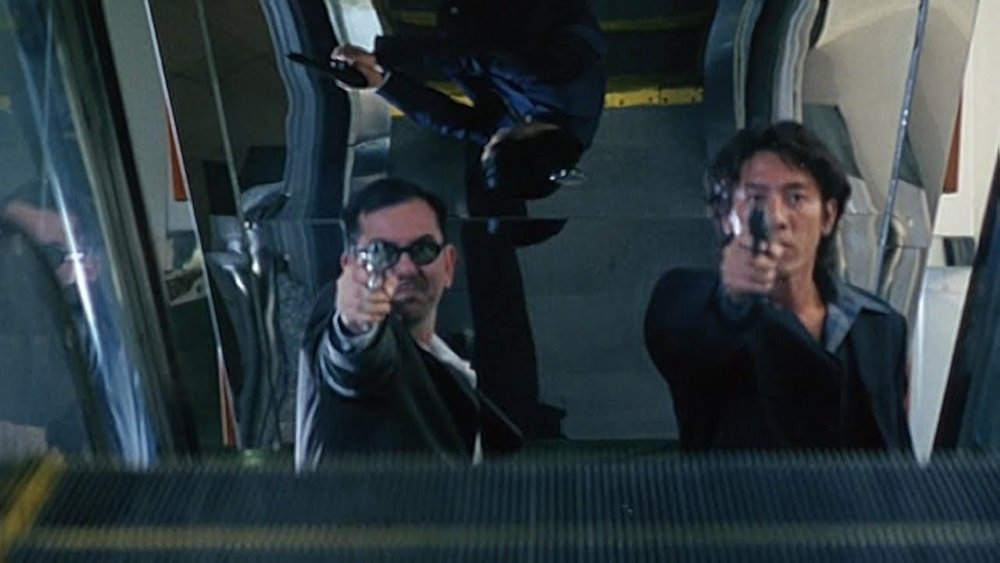 Johnnie To took over the crown of Hong Kong’s king of crime thrillers after John Woo left for Hollywood and The Mission (1999) is the film that put him on the throne.

The story is a generic gangster stuff: a middle-aged mob boss (Eddy Ko) survives an assassination and his brother / right hand man (Simon Yam) calls in five professionals to be his bodyguards. Anthony Wong is the big brother of the group, a retired Triad who takes the four junior members of the crew (Francis Ng, Roy Cheung, Jackie Lui, and Lam Suet) under his wing. The disparate personalities become an ever-present swarm around their client and Wong hones their teamwork to clockwork perfection for an attack in a deserted mall that To executes with stunning precision.

To’s lean, precise style is the opposite of John Woo’s explosive action frescoes. He has an unerring eye for composition and creates tension from stillness as his badass bodyguards patiently wait for their opponents to make the first move, then strike swiftly with surgical precision.

These guys are macho and confident without being flashy about it: they have something of the swagger of the suit and tie gangsters of Reservoir Dogs, but these guys are coiled like a spring, cool and calm but ready to strike at the drop of a hat or the draw of a gun, and trained to be the best. It’s a fantasy of criminal professionalism, to be sure, but a loving fantasy that honors the bond of friendship and brotherhood when their assignment puts them at odds.

Johnny To swept the Best Director category across the Hong Kong film awards and the film was voted the Best Picture by the Hong Kong Film Critics’ Society.

On DVD through imports and on SVOD through Amazon Video