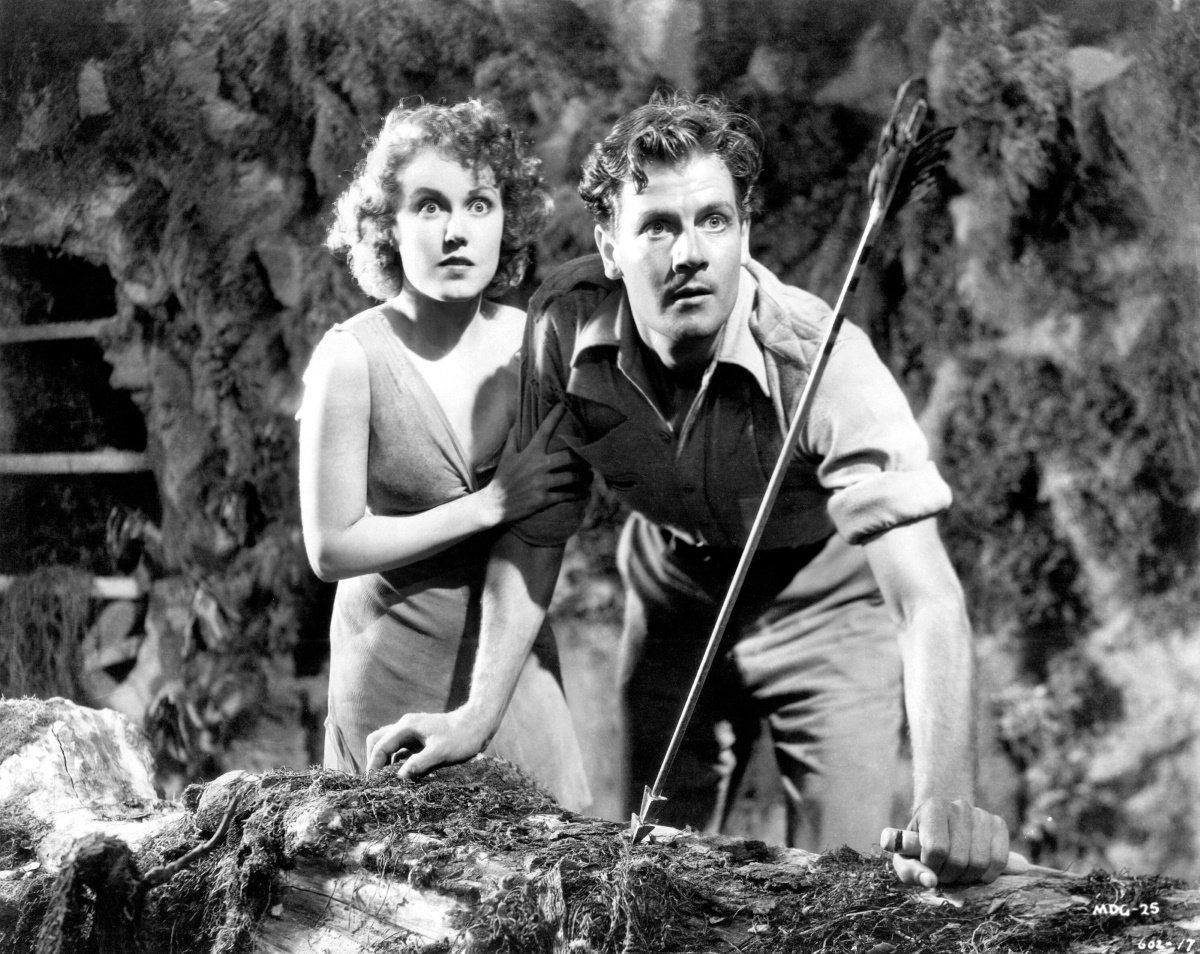 It’s a classic premise: a sadistic hunter captures and stalks human prey. We’ve seen so many variations but it was born in The Most Dangerous Game (1932).

A very young Joel McCrea stars as celebrated big game hunter Bob Rainsford, shipwrecked on an isolated South Seas island turned private hunting reserve by the reclusive Count Zaroff (Leslie Banks), the very model of the decadent aristocrat turned mad megalomaniac. He lives in a castle in the middle of the jungle and entertains himself by luring passing ships to their doom on the rocky straights.

It all plays out on densely detailed and completely artificial sets that a magnificent in their detail: cliffs, rivers, a swamp, a waterfall, and winding trails through a jungle so dense it’s claustrophobic. Directors/producers Merian C. Cooper and Ernest B. Schoedsack produced the film on the magnificent jungle sets built for another film of theirs, King Kong, giving the low budget movie an epic canvas.

Also borrowed from King Kong are stars Fay Wray and Robert Armstrong, playing siblings and fellow “guests” of Zaroff. The three are toyed with by their smirking host, who entertains in high style while making a show of the horrors that await his guests. Zaroff is a wonderfully flamboyant villain and Leslie Banks plays the part with aristocratic excess and sadistic megalomania, a man with God-like delusions and no sense of fair play.

It’s adapted from the story by Richard Connell and Schoedsack, who shares directing credit with Irving Pichel, delivers terrific set pieces and exotic atmosphere in a tight 63 minutes. They bring gothic style to their chosen strain of primitive exoticism while the grotesque and lurid details, even in suggestion, give the film a pre-code perversity beyond the premise. Gothic horror gives way to survival thriller in the primitive world of the jungle, where the American big gun hunter refuses to the game. Superb lighting and cinematography adds to the oppressive atmosphere, and McCrea’s physicality gives the action a dramatic dynamism.

The premise has been reworked in film after film. This is still the best.

Because it fell into the public domain years ago, many poor editions are out there. We have only included superior editions here.

Add to My List on HBO Max, to My List on Paramount+, or to My List on Criterion Channel, or stream free on Kanopy or on Hoopla, which are available through most public and college library systems.

The film fell into the public domain decades ago, It’s been available in numerous home video incarnations, most of them indifferently culled from inferior source material. Criterion released a special edition DVD in 1999 and Flicker Alley released an excellent Blu-ray in 2012.

Flicker Alley’s beautifully-mastered Blu-ray is superior to all the previous disc releases and includes a bonus short feature among the supplements: the early South Seas documentary / travelogue / exploitation spectacle Gow The Headhunter (1931), which was photographed by Schoedsack and Cooper but is more curiosity than classic. Also features commentary on both films and an archival audio interview with Merian C. Cooper, plus a booklet.