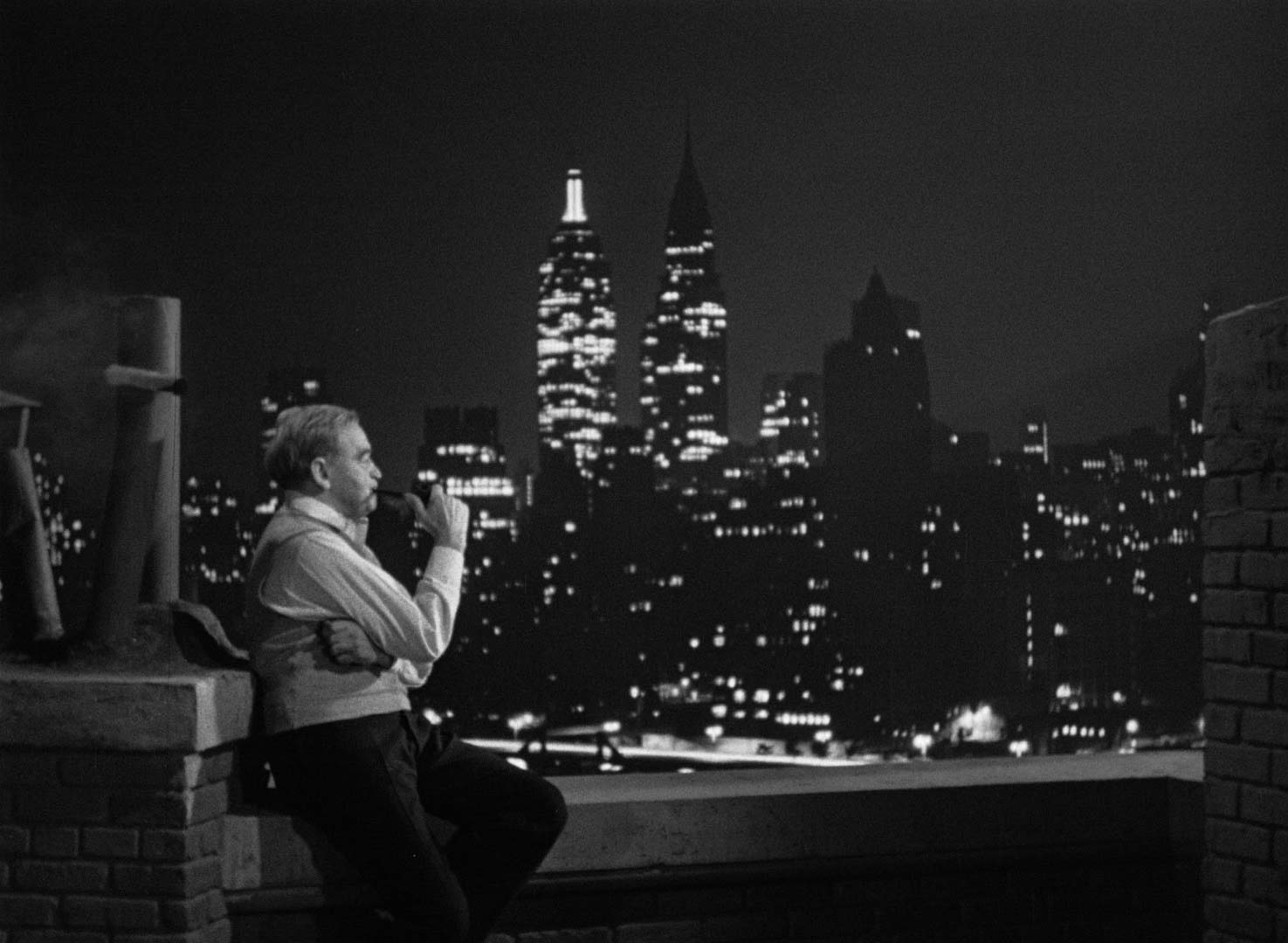 “Ladies and gentlemen, the motion picture you are about to see is called The Naked City.”

With a helicopter shot slowly closing in on Manhattan, producer Mark Hellinger’s staccato narration introduces The Naked City (1948) (“It was not photographed in a studio…”) and continues to comment throughout like a documentary commentator with a literary flair. It’s a conceit that serves this police story nicely, giving the patina of realism to this deglamorized look of the work of the homicide squad.

Barry Fitzgerald reigns over the film with his jovial good humor as a veteran detective Lt. Dan Muldoon, who leads the investigation of the murder of a high living model. He has few clues and fewer suspects, until he cracks the story of big talking Howard Duff and throws some light on his shady past.

Jules Dassin, who had just come off the shadowy, expressionist Brute Force, peels away those flourishes to shoot in a straightforward style influenced by the Italian neo-realists and the contemporary American newsreels. He makes effective use of the New York locations, from the busy streets that rookie detective Jimmy Halloran (earnest Don Taylor) hoofs through to chase a hunch to the thrilling foot chase across the Williamsburg Bridge. But next to the documentary realism of these scenes is the expressionist imagery of the startlingly lurid murder that kicks off the story and Dassin returns to low angle shots, fluid camera movement, hard shadows, and dramatic graphic compositions to create a sense of menace and darkness beneath the bustle of the city at work.

It’s also a pioneering police procedural that captures the mundane details of canvassing for clues and chasing down leads with loose performances. The focus on the workaday grind of a police investigation and the offhanded glimpses of a cop’s home life places The Naked City in the movement toward realistic crime dramas and police procedurals of the late 1940s.

The film is rich in supporting performances by soon to be famous characters actors—Arthur O’Connell, James Gregory, Paul Ford—but the city itself becomes the film’s most vivid character. Shot entirely on location in New York City, the distinctive cityscape looms over practically every shot and injects the film with a defining sense of place. You can see the roots of The French Connection in the bustling city scenes and the exciting foot chase finale on the elevated walkway.

“There are eight million stories in the naked city. This has been one of them.”

It won Academy Awards for cinematographer William Daniels and for editing and was added to the National Film Registry in 2007.

Criterion Collection releases the film on Blu-ray and DVD from a 4K restoration by TLEFilms Film Restoration & Preservation Services in Germany – the clarity is breathtaking – and carries over the supplements from the 2007 DVD release, including commentary by screenwriter Martin Wald, a 40-minute Q&A with Jules Dassin from 2004, and interviews with film historian Dana Polan and architect James Sanders. New to this release is the video essay “Uncovering The Naked City” from Bruce Goldstein.