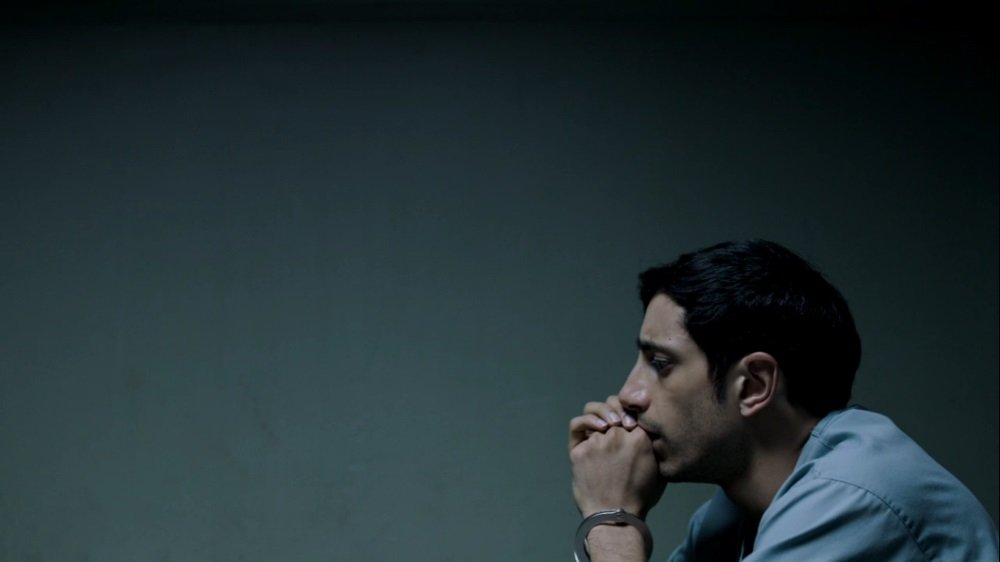 The first episode of The Night Of (2016), the HBO mini-series created by Oscar-winning screenwriter Steven Zaillian (Schindler’s List) and acclaimed author and screenwriter Richard Price (The Wire), plunges the audience into the skin of a Nasir “Naz” Khan (Riz Ahmed), a nerdy first-generation Pakistani-American college boy and tutor to the football star. A skinny kid on the social fringes, his first adventure being a part of the popular crowd takes a detour into a wild night of drugs, sex, and the violent murder of his date. He looks so guilty that he flees with the murder weapon in his hand and by end of the extended episode, which plays out at a measured, deliberate pace that draws out the tension to anxiety-inducing levels, he is arrested for the murder and begins his long, grueling ordeal in the justice system. The case is tabloid bait—an Arab-American Muslim accused of brutally murdering a pretty but troubled white girl—and Naz’s panic has only made him look guiltier in eyes of both the law and public opinion.

John Turturro is Jack Stone, a bottom-feeding lawyer to drug slingers, hookers, and petty criminals, negotiating plea deals for flat fee. When he spots a nervous Naz in a police station cell, he figures he’s just another kid swept up in the system and he offers to represent him, only to find himself in the midst of a huge murder trial. Stone is a real character—divorced, a regular client of a hooker he often represents, suffering from a near-crippling skin condition on his feet—and he’s no legal mastermind but he understands the cops, the prosecutors, and the streets. Much to his own surprise, he becomes committed to his client even when he’s pushed aside by a legal heavyweight (Glenne Headly) who takes the case pro-bono for the publicity. When the big-time lawyer shuffles the case off to a junior associate (Amara Karan), Stone takes second chair in court and the lead in the investigation.

Bill Camp is the old-school police detective who puts the case together piece by piece, convinced that the accumulation of evidence has put the right man on trial, and Jeannie Berlin is the D.A. who takes it to trial with the same conviction and professionalism.

Part procedural, part character piece, part dark drama of an innocent young man tossed into the brutal world of prison where he’s a walking target, already pronounced guilty by the press before any evidence has been revealed, this is a crime drama with the depth and detail of a novel. This isn’t about a miscarriage of justice—the prosecution is presented with as much respect and dignity as the defense—but about how the slow gears of justice grind up those caught in its wheels. Though ostensibly based on the British series Criminal Justice, this series is very much the creation of Zaillian and Price. It’s their voices that define the story and the characters.

Watch it on HBO Now, HBO Go, and HBO On Demand. If you don’t have a subscription, you can stream the first episode for free online.

and other services. Availability may vary by service.
The Night Of [DVD + Digital HD]

The Night Of [Blu-ray + Digital HD]