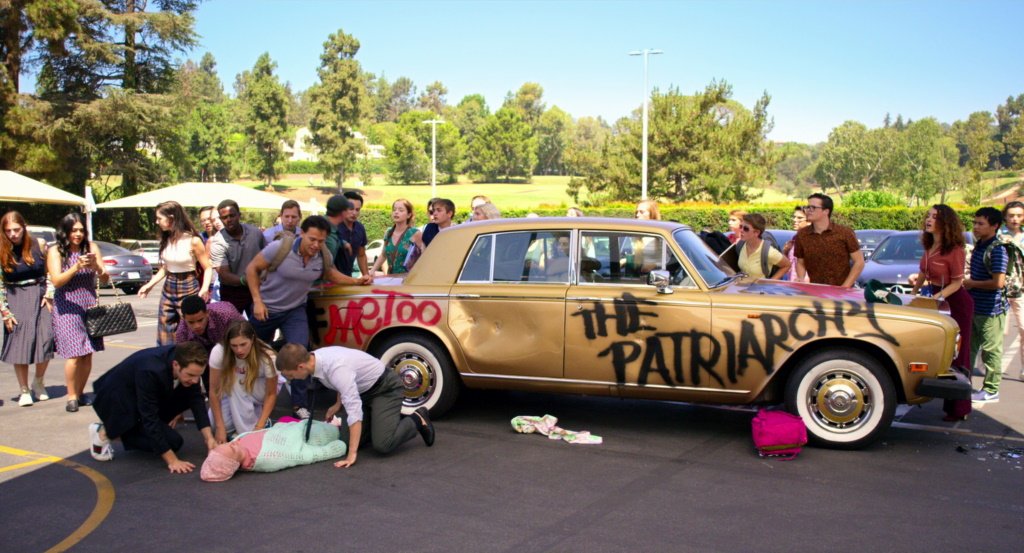 Cable-cutters can keep up with many prime time network series on Hulu. Among the new shows now available are legal drama “Bluff City Law” with Jimmy Smits and Caitlin McGee;

You can also see over two dozen returning shows, including hit family drama “This Is Us“;

Episodes arrive on Hulu (with limited commercial interruption) a day after their respective network debuts.

An underpaid spy (Manoj Bajpayee) keeps his dangerous life a secret in “The Family Man” (India, with subtitles), an espionage thriller with a twist of workplace comedy. The new series was produced for Amazon Prime India. Ten episodes on Amazon Prime Video.

Gaby Hoffmann, Amy Landecker, Jay Duplass, and Judith Light carry the tunes in “Transparent: Musicale Finale,” which brings the Emmy-winning comedy to an end without its original star Jeffrey Tambor (who left the show after harassment allegations). On Amazon Prime Video.

Great music sustains “Yesterday” (2019, PG-13), a romantic comedy about a failed singer-songwriter (Himesh Patel) who wakes up in a world where The Beatles never existed and performs their songs as his own. Lily James and Ed Sheeran costar, Danny Boyle directs from an original script by England’s romcom king Richard Curtis (Love Actually). On Cable on Demand, VOD, and DVD, and at Redbox.

Classic pick: if silent movies leave you cold, try Buster Keaton’s action-packed comedy “Steamboat Bill, Jr.” (1928, silent with score), which is hilarious and warmhearted and features some of the most amazing stunts captured on camera. Streams free on Kanopy, free through most library systems.

A serial killer appears for one night every nine years in “In the Shadow of the Moon” (2019, not rated), a murder mystery with a science fiction twist. Boyd Holbrook is the cop who follows the case for decades and Cleopatra Coleman, Bokeem Woodbine, and Michael C. Hall costar in the Netflix Original movie from director Jim Mickle.

Wong Kar-Wai’s romantic action drama “The Grandmaster” (China, China, 2013, PG-13, with subtitles) stars Tony Chiu-Wai Leong as legendary martial arts master Ip Man. Ziyi Zhang and Chang Chen co-star and Yuen Wo Ping provides the choreography, which Wong turns into something more like a dance on screen. It was nominated for two Oscars, including one for its rich cinematography.

The animated short feature “Sound & Fury” (2019, not rated) is a companion piece to the new album by country artist Sturgill Simpson.

True stories: the short documentary “Birders” (Mexico, 2019, with subtitles) celebrates those who monitor and protect birds that migrate across the US-Mexico border.

International TV: a former spy, now teaching Shakespeare, is called back into service in the “Bard of Blood” (India, with subtitles). Also new:

“Skylines: Season 1” (Germany, with subtitles), a drama set in the music industry;

“Fido” (2007, R), a social satire of the undead used as menial servants, is one of the best zombie comedies. Carrie-Anne Moss, Dylan Baker, and Billy Connolly star.

International TV: “A French Village: Seasons 1-4” (France, 2009-2012, with subtitles) follows the inhabitants of a rural town during the Nazi occupation of World War II. The hit drama from France played on PBS in some American cities.

Disney’s animated “Pocahontas” (1995, G), featuring the voices of Mel Gibson, Irene Bedard, and Christian Bale, is one of the last classics of old school animation. It won Oscars for the score and original song “Colors of the Wind.”

“The Lego Movie 2: The 2nd Part” (2019, PG) animates the world of interlocking toys for a new adventure involving invaders from outer space.

The fourth season of the documentary series “The Circus: Inside the Wildest Political Show on Earth,” is now on all Showtime platforms. New episodes each Sunday.

The family friendly adventure “A Dog’s Way Home” (2019, PG) with Ashley Judd is now streaming on all Starz platforms.

Celebrate the 50th anniversary of Monty Python’s Flying Circus with the vintage comedy series “Ripping Yarns” (1976-1979) from Michael Palin and Terry Jones and the 1980 BBC production of “The Taming of the Shrew” starring John Cleese.

“Directed by Christian Petzold” spotlights four features from the German director, including the Criterion Channel debuts of the mysterious “Yella” (2007), romantic thriller “Jerichow” (2008), and hard-hitting drama “Barbara” (2012), all starring the brilliant Nina Hoss. With subtitles.

Also on Criterion, “Directed by Lina Wertmüller” spotlights seven features by the Italian filmmaker who was the first woman ever nominated for Best Director at the Oscars, including the satirical “Love and Anarchy” (1973), battle-of-the-sexes comedy “Swept Away” (1974), and Oscar-nominated black comedy “Seven Beauties” (1975), all starring Giancarlo Giannini. With subtitles.