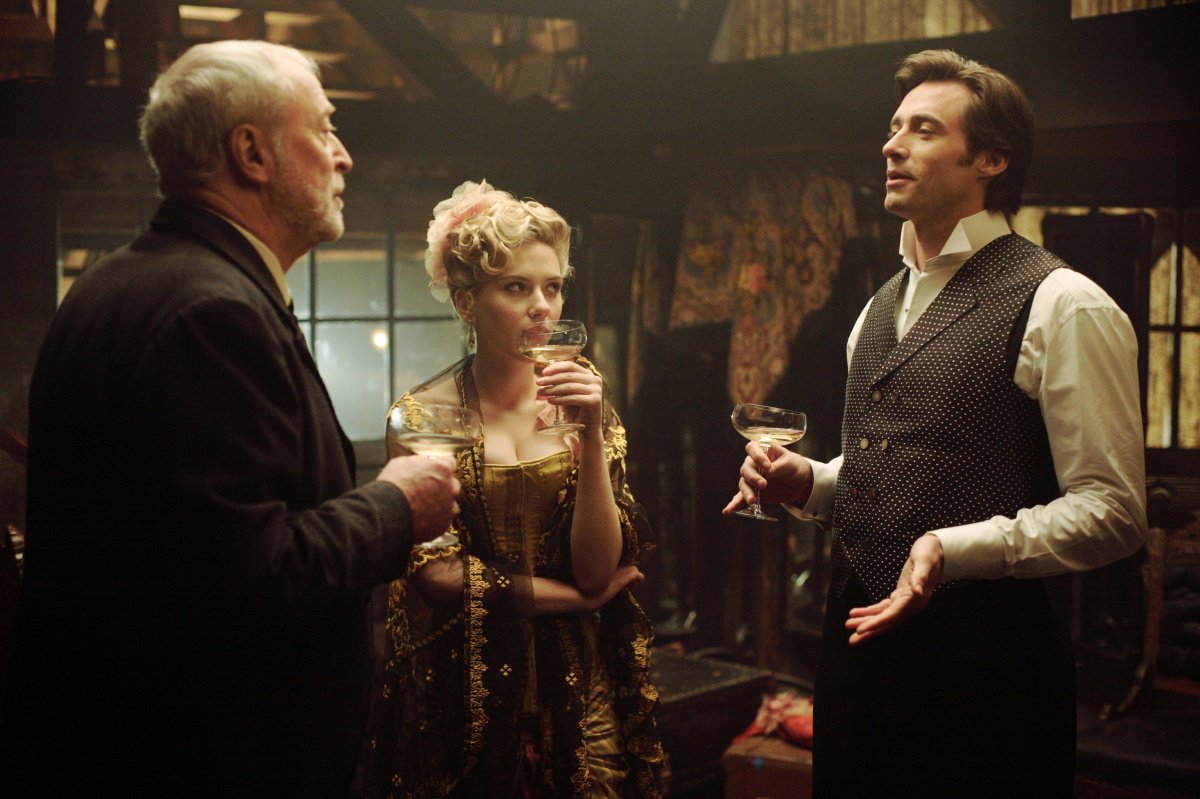 Hugh Jackman and Christian Bale are journeyman magic assistants in Victorian era London who become rivals as they rise to fame as magicians in their own right in Christopher Nolan’s devious The Prestige (2006).

Jackman is the fame-hungry showman Robert Angier and Bale is the consummate professional and purist Alfred Borden, the superior craftsman who lacks the flair and flamboyance that makes stars. They are apprentices to the great Milton (Ricky Jay), a celebrated stage magician in 1890s London, until a fatal mistake during a performance widows Robert, who vows revenge against Alfred. When we pick them up years later, they are adversaries building their own solo shows and their respective competitive drives—Alfred’s determination to concoct and master a brilliant new trick, Robert’s ruthless need to steal Alfred’s thunder and become the toast of London—leads them to merciless heights of self-destruction.

Appearances aside, this is not a story of stage magic. It is a thriller of obsession built on the dramatic fulcrum of driving vengeance with a plot twist out of science fiction and a narrative twist born of Nolan’s love of shuffling timelines. In a way, the reveals are a kind of cheat in that, at least in one instance, it relies on a piece of inexplicable science magic. But as Nolan, who adapts Christopher Priest’s novel in collaboration with his brother Jonathan Nolan, treats it, the tricks serve as insight to the character of the men who execute them.

David Bowie has a memorable bit playing the real-life visionary inventor Nikola Tesla, whose experiments hand Robert his fame—but at a price that Robert coldly pays in every performance. Alfred, meanwhile, sacrifices a full life and the love of his beautiful assistant Olivia (Scarlett Johansson), who arrives as a spy sent by Robert to steal the illusion and ends up falling for Alfred, to sustain his own astounding piece of stage magic. They are the Cain and Abel of Victorian magic, brothers turned enemies sabotaging one another on their respective odysseys to success, yet ultimately their own worst enemies as they sacrifice their own humanity for their fame and their art.

It’s all framed in flashback, carried along by the competing narratives from the diaries of both Robert and Alfred, and Nolan directs with his trademark narrative shuffling, moving back and forth through their lives to find the roots of the obsessive competition that begins as a bitter rivalry and becomes increasingly fierce to the point of madness.

Piper Perabo costars as Robert’s wife, Andy Serkis is Tesla’s assistant, and Michael Caine is the engineer concocts the stage devices and serves as the film’s conscience.

It earned Oscar nominations for Wally Pfister’s cinematography and for the art direction.

The Blu-ray and DVD editions include the multi-part documentary “The Director’s Notebook: The Cinematic Sleight of Hand of Christopher Nolan” and the still gallery “The Art of The Prestige.”