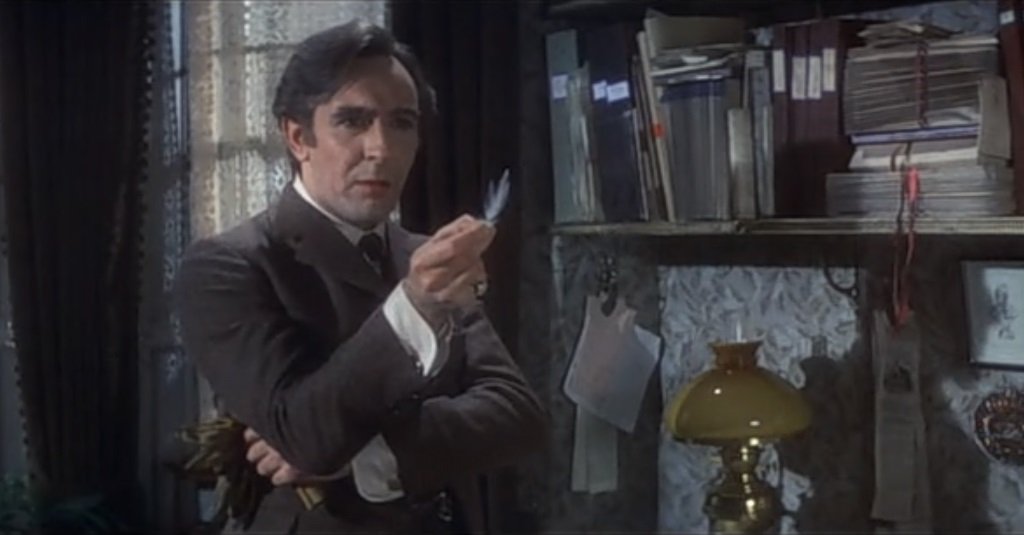 The Private Life of Sherlock Holmes (1970) is one of the loveliest of Billy Wilder’s pictures, a sly, bittersweet, autumnal film that approaches the Holmes legacy with a sense of humor and a sense of respect.

Robert Stephenson plays Holmes as a genial, witty fellow well aware of his reputation and quite a bit more socially deft than subsequent incarnations of the great detective. Colin Blakely is a jolly, loyal Watson, nothing like the buffoon played by Nigel Bruce in the Basil Rathbone films but definitely an excitable fellow with a rather socially conservative bent.

They are a delightful pair of friends whose affection for one another is palpable in their joking and in Watson’s serious concern for Holmes’ addiction, which flares up when he’s bored. And he is very bored until a foreign beauty (Geneviève Page) is fished out of the Thames with Holmes’ card in her pocket and a few enigmatic clues on her person.

The game is afoot, indeed, in a case that takes Holmes and Watson in the orbit of Mycroft (Christopher Lee in the most imperious incarnation I’ve seen of the character), a bizarre mystery involving missing midgets, and the Loch Ness monster. Along the way, Wilder plays quite cleverly with the homo-erotic readings of the Holmes and Watson relationship while spinning a melancholy tale of a logician hiding the heart of a wounded romantic.

, iTunes, GooglePlay and/or other services. Availability may vary by service.
The Private Life of Sherlock Holmes [Blu-ray]

Kino’s Blu-ray and DVD release is somewhat marred by faded color, grit and scuffs on the print, damage at reel ends, visible cue marks in spots, a pulsing image intensity, light damage that washes out the edges of the image in some sequence of the third act, and a near-constant haze over the image. The film was shot with a heavy use of filters but it becomes more like video noise in the digital transfer. This is candidate for a full-blown restoration before the original elements are beyond salvaging.

Kino’s release features 50 minutes of deleted scenes, reconstructed from incomplete elements. By which I mean, some of it presents film footage with no audio and an epilogue offers audio with no footage (a single still stands in for the image track). There are also video interviews with Christopher Lee (who apparently is the only actor to play both Sherlock Holmes and Mycroft Holmes on the big screen) and editor Ernest Walter, who discusses why so much footage was cut from the film. All supplements are carried over from previous home video editions.