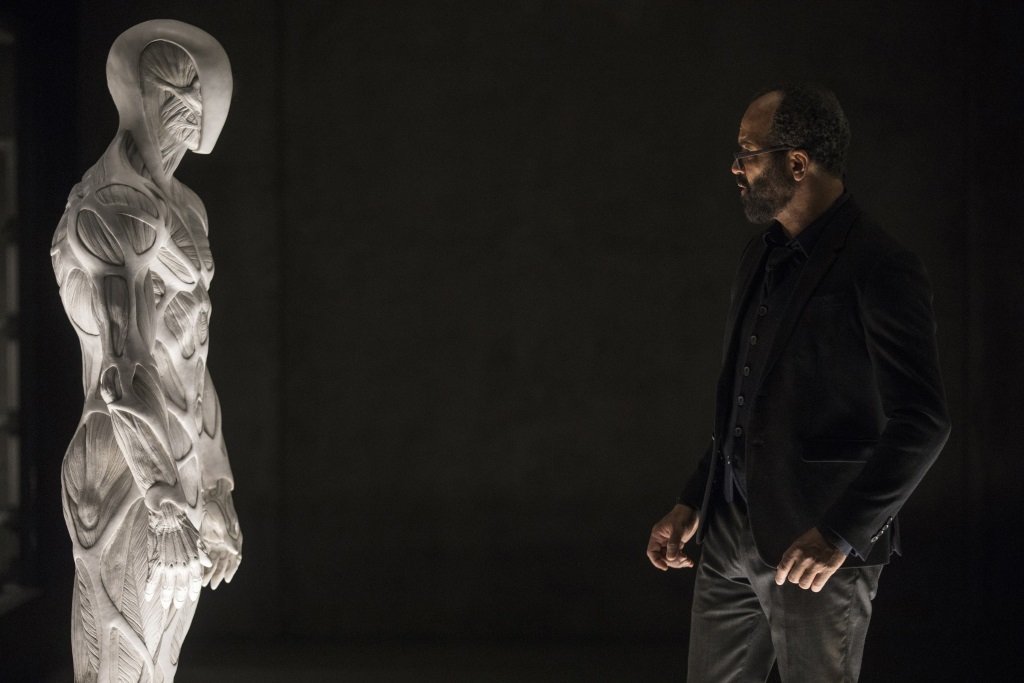 Two acclaimed shows that tackle contemporary issues through the prism of science fiction are back for their respective second seasons. Hulu presents The Handmaid’s Tale, the Emmy-winning dystopian portrait of America under the totalitarian rule of religious extremists starring Elisabeth Moss. Two episodes now available with new episodes every Wednesday. And HBO returns to Westworld, a reworking of the 1970s movie for the age of artificial intelligence, with new episodes arriving Sunday nights.

The Rachel Divide (2018, not rated) profiles Washington State civil rights activist Rachel Dolezal and the national conversation instigated when the self-identified black woman was revealed to be white, grounded in intimate conversations with Dolezal herself.

It debuts directly to Netflix.

Two more original documentaries debut on streaming services: the four-hour Bobby Kennedy for President (2018, not rated) on Netflix and Tiny Shoulders: Rethinking Barbie (2018, not rated), about the cultural history of the iconic toy, on Hulu.

New York Times TV critic Mike Hale describes Bobby Kennedy for President as “an odd hybrid — a conventional, public-television-style biographical documentary that veers, in its fourth hour, into the sort of true-crime investigation Netflix is known for. Then at the last minute it swerves again, with a jarringly sentimental reunion and visit to the scene of the killing that’s straight out of the feel-good branch of reality TV.”

The four-part program is now streaming on Netflix.

“In Tiny Shoulders: Rethinking Barbie, filmmaker Andrea Nevins… rethinks and recontextualizes Barbie and her legacy during a pivotal time in the doll’s story,” argues IndieWire reviewer Kate Erbland. “The film uses Barbie as a lens by which to explore topics like body image, the patriarchy, and the various waves of feminism, making a clever case that the story of Barbie is really the story of the modern woman.”

Spike Lee brings Antoinette Nwandu’s play Pass Over (2018, not rated), described as Waiting for Godot meets Do the Right Thing, to the small screen with his film of a stage production directed by Danya Taylor at Chicago’s Steppenwolf Theatre. Los Angeles Times critic Gary Goldstein writes that the production “proves a brief yet rousing experience, one that retains its theatrical power — and then some — via Lee’s deftly constructed transfer.”

The family-friendly comedy Paddington 2 (2017, PG) continues the comic adventures of the marmalade-loving bear in England, this time bringing joy to prison after he’s convicted for a crime he did not commit.

Annette Bening plays American actress Gloria Grahame in Film Stars Don’t Die in Liverpool (2017, R), inspired by the true story of a romance between the aging Hollywood star and a younger British man (Jamie Bell) while doing a play in England. Also new:

Black Lightning: Season 1, the CW’s newest superhero series, adds yet more colors to the array of DC Comics heroes, and I don’t just mean an empowered African-American character. Jefferson Piece (Cress Williams) is a high school principal in black neighborhood and a father of two grown daughters who dons the suit after years in retirement to battle a resurgence in crime, giving the series a character dealing with age, parenting, community duty, and personal responsibility, not to mention the lives of black teens and young adults in urban America. It arrives on Netflix days after the season finale showed on TV.

The biographical drama The Man Who Knew Infinity (2015, PG-13) stars Dev Patel as real-life visionary mathematician Srinivasa Ramanujan, a self-taught math genius whose complex formulas and proofs brought him from colonial India to Cambridge, and Jeremy Irons as his mentor.

Two new Netflix Original movies arrive this week: The Week Of (2018, not rated), a comedy starring Adam Sandler and Chris Rock and directed by Saturday Night Live veteran (and Triumph to Insult Comedy Dog creator) Robert Smigel, and high school comedy Candy Jar (2018, not rated) about romance between rivals on a debate team.

Foreign affairs: the offbeat Psychokinesis (2018, South Korea, not rated, with subtitles), about the deadbeat dad of an estranged daughter who suddenly gets super powers, comes from Yeon Sang-ho, director of the hit zombie thriller Train to Busan. The odd mix of comedy, community action, and corporate villainy debuts directly to Netflix in the U.S.

Streaming TV: from Australia comes the comedy The Letdown: Season 1 about a new mother who joins a support group for a little help facing parenthood. Also new:

True stories: the documentary Bill Nye: Science Guy (2017, not rated) profiles the educator and activist who also happens to star in the Netflix original series that returns in May.

Stand-up: Kevin James: Never Don’t Give Up (2018, not rated), the first stand-up performance from the sitcom star in years, and German comedian Enissa Amani: Ehrenwort (2018, Germany, with subtitles).

The comedy Operation Avalanche (2016, R) satirizes the conspiracy theory that the moon landing was faked by Stanley Kubrick with a mock-documentary approach.

Vikings: Season 5 continues the pillaging in the hit dramatic series from The History Channel (Prime Video and Hulu).

BPM (Beats Per Minute) (France, 2017, not rated, with subtitles), a drama of the lives of ACT UP activists in Paris during the AIDS epidemic early 1990s, won awards at the Cannes Film Festival and France’s Cesar Awards.

The horror, the horror: Nicolas Cage and Selma Blair are parents gone bad in Mom and Dad (2018, R) and Joachim Trier directs Thelma (Norway, 2017, not rated, with subtitles), which channels Carrie in a Scandinavian vein.

Kid stuff: Wildwoods: Season 1 is a puppet series for younger viewers from Ireland.

War for the Planet of the Apes (2017, PG-13), the third and ostensibly final entry in the franchise reboot, pits the peaceful ape civilization in a last-stand battle for survival against a fanatical renegade militia leader (Woody Harrelson). Andy Serkis once again delivers an expressive and nuanced motion-capture performance in the unexpectedly touching story. Reviewed on Stream On Demand here.

The Fantasticks (1995, PG) is the big screen adaptation of the off-Broadway musical comedy twist on Romeo and Juliet that ran for 42 years and over 17,000 performances.

TCM Select Pick of the Week is On the Town (1949), a story so slim as to be almost abstract—singing sailors Gene Kelly, Frank Sinatra, and Jules Munshin look for girls while on 24-hour leave in the Big Apple—in a movie that is all heart. This Technicolor fantasy of New York is painted in primary colors, sculpted in high energy choreography, and softened in small town romanticism. It’s one of the essential Hollywood musicals and the greatest of three big screen pairings between Hollywood’s all-American hoofer and the Great American Voice. “New York, New York, it’s a wonderful town” indeed. Streaming through October 19.

Elizabeth Taylor is Star of the Week, celebrated with a collection of 17 films, from Lassie Come Home (1943) and National Velvet (1944) to Cat on a Hot Tin Roof (1958) with Paul Newman and Reflections in a Golden Eye (1967) with Marlon Brando. Other new arrivals include Little Women (1949) with June Allyson and costume adventure Ivanhoe (1952) with Robert Taylor.

A collection of twelve Early Hitchcock features, including his first masterpiece The Lodger: A Story of the London Fog (1927) (with supplements from the Criterion disc) and British classics The 39 Steps (1935) and The Lady Vanishes (1938), as well lesser-known but marvelously entertaining and surprising films such as Rich and Strange (1932) and Young and Innocent (1937). Also new: