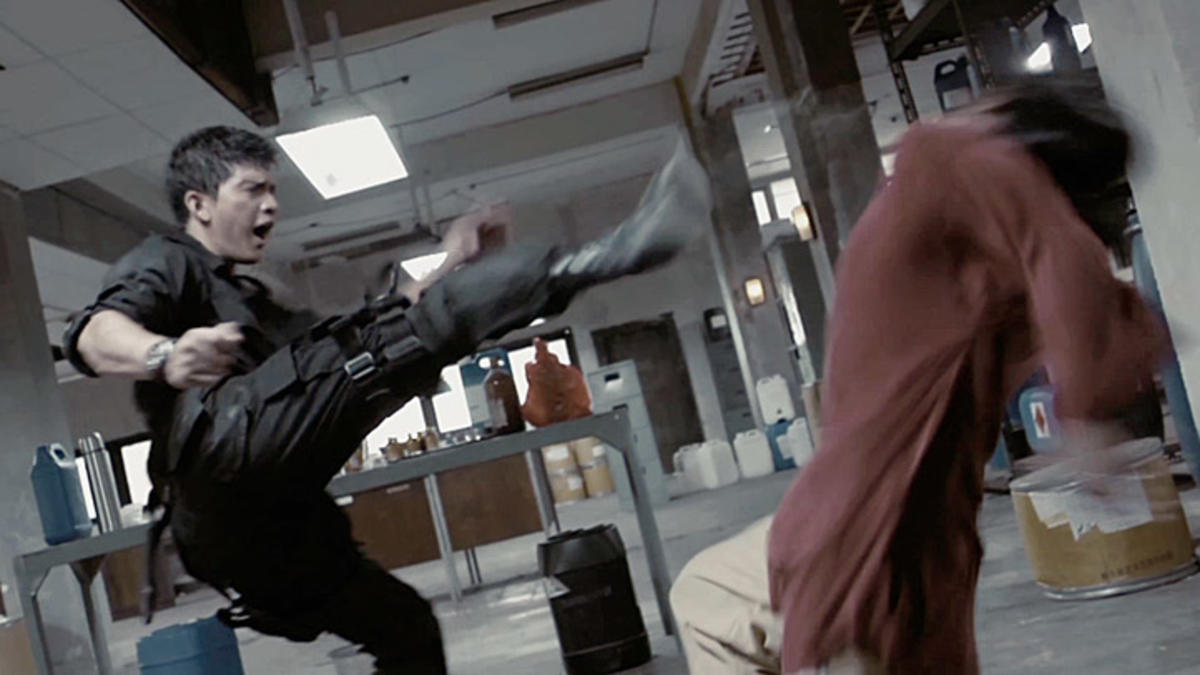 Set almost entirely in an apartment building in the slums of Jakarta, the extreme action film The Raid: Redemption (Indonesia, 2011) has a reputation as one of the fiercest, most brutal crime thrillers around.

Directed by Gareth Huw Evans, a Brit (actually Welsh) in Asia, and starring martial arts professionals in the lead roles, this is a meeting of Western and Eastern action cinema, a savage portrait of cops and crooks in a culture of criminal Darwinism built on a ruthlessly simple plot and a fiercely stripped-down style.

A strike force is sent in to an apartment building populated by criminals and protected by the kind of arrogant underworld kingpin that populate such movies. When the cops enter, the kingpin offers a reward to any inhabitant who takes out the intruders. The body count is epic. The action is assaulting. Survival in this film is as much a matter of endurance as skill: these guys take beating after beating and get back up for the next round. You may wince so hard that you end up with sympathy bruises.

The Raid: Redemption has the choreography of the grittiest gangster thrillers from the Hong Kong action heyday of the nineties and the whiplash moves of Sammo Hung (in his prime) and Tony Jaa, but it ups the ante on the brutality and culture of corruption. Stars Iko Uwais (our upstanding hero, who has a pregnant wife at home but won’t give up on his comrades), Joe Taslim (the stalwart team leader), and Yayan Ruhian (the berserker building enforcer, appropriately named Mad Dog) are all martial arts professionals and serve as fight choreographers on the film, giving it an impressive variety of moves.

The backstory makes the police raid even more meaningless and it’s a fine line as to whether the film is hard-heartedly cynical or a statement of the cynicism of a thoroughly corrupt culture. The American title is almost a joke: there’s no redemption here, merely survival. You can argue the film is simply calculated exploitation as a stunning spectacle, but there is also something in its sober, serious attitude that gives the film a twisted authenticity as a sour social commentary on life in Jakarta.

Or maybe I’m just taking it all too seriously. Either way, this impressive display of hard-edged martial action and bare-knuckle direction is not something you can just toss off when it’s over. The cynicism of this vision seems born of real anger.

, iTunes, GooglePlay and/or other services. Availability may vary by service.
The Raid: Redemption [Blu-ray]

The Blu-ray and DVD from Sony Pictures Home Entertainment feature commentary director Gareth Evans, additional interviews with Evans and composers Mike Shinoda and Joe Trapanese, a brief but impressive “Anatomy of a Scene with Gareth Evans” that reveals the ingenuity over budget in a signature scene from the film, a couple of entertaining animated extras, and six video blogs which are, on the whole, as good as or better than the official featurettes.