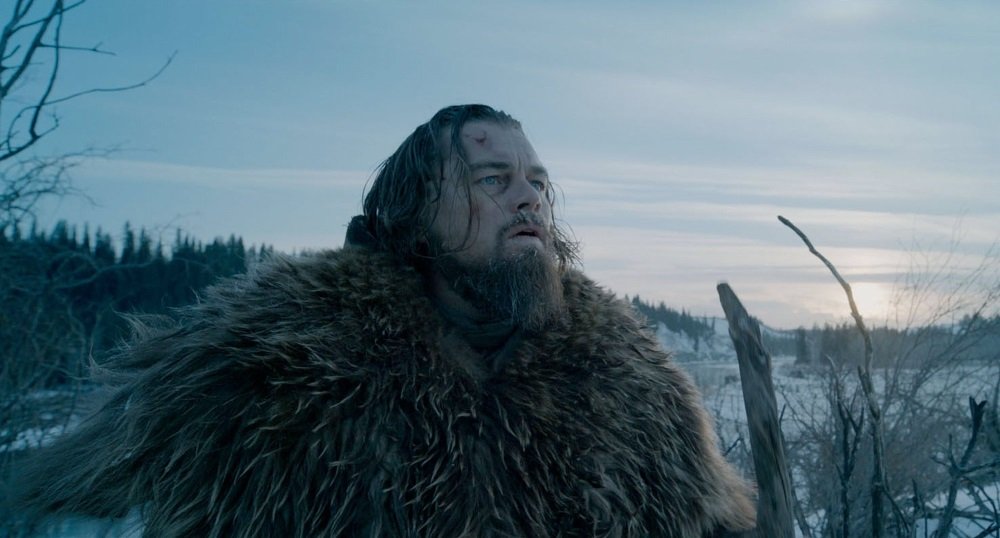 The Revenant has been called a revenge movie, which is true enough. Leonardo DiCaprio is Hugh Glass, a real-life 19th century mountain man and guide whose story inspired legends, books, and at least one previous film (Man in the Wilderness with Richard Harris). Left for dead by a particularly mercenary member (Tom Hardy) of the hunting party he guides through the mountain wilds, against all odds he literally rises from his grave to pull himself from certain death and claws his way back to what passes for civilization for revenge against the man who murdered his son and buried him alive. Vengeance makes for a primal motivation but The Revenant is really a tale of survival: the settling of America as an odyssey of mythic dimensions in an untamed wilderness determined to kill all who fail to respect it.

It’s 1823 in the still unexplored (by white men at least) frontier and an expedition of fur trappers are on the run after being attacked by a local Indian tribe searching for a maiden abducted by white explorers. The assault is swift and brutal and filmmaker Alejandro González Iñárritu sends his camera gliding through it in a rush of fluid long takes, a mix of mesmerized observer and panicked victim. Losing their canoes and most of their supplies in their escape, the few survivors have to hike out through the frozen mountains, where Glass is attacked by a mother grizzly bear protecting her cubs. It’s one of the few digital effects in a film that prides itself on its physical realism but it feels disturbingly authentic thanks to DiCaprio’s intense performance and the naturalism of the CGI bear, clearly based on behavioral observations of wild creatures. It’s like a natural history study let loose in a wilderness drama.

Iñárritu is working again with longtime cinematographer Emmanuel Lubezki—they both won Oscars for their previous collaboration, Birdman—and their use of graceful unbroken shots in the most grueling and violent scenes combines hyper-realism with a kind of cinematic poetry that is, at its best, at once brutal and sublime. They had to travel to remote locations in Canada and Argentina to find dramatic landscapes and winter snows to match the primal vision and Lubezki shot it almost entirely in natural light. Whether it makes the film more or less realistic is up for discussion, but it does give it a distinctive texture, and Iñárritu makes the case that the physical demands of the production added to the intensity of the performances. It certainly demanded a commitment that comes through in the DiCaprio’s performance.

This is the unforgiving, cruel world that Iñárritu has explored all through his career and The Revenant is the most elemental portrait yet, but it also slips into Terrence Malick-like visions of magical realism; one scene ends with the camera following the embers of a campfire into the night sky, where they seem become the stars themselves, while the dead appear as benign visions in the snowy world to push him on. It’s grueling and bloody and majestic and immersive, a film transport theater audiences back hundreds of years. Home video may not have the same power to transport, what with smaller screens and modern-day distractions in your home viewing setting, but the imagery and performances are impressive under any conditions.

, iTunes, GooglePlay and/or other services. Availability may vary by service.
The Revenant [DVD]

The DVD and Blu-ray releases feature the documentary “A World Unseen,” a 44-minute production that was originally released on YouTube in early 2016 (you can view it above) and a still gallery.