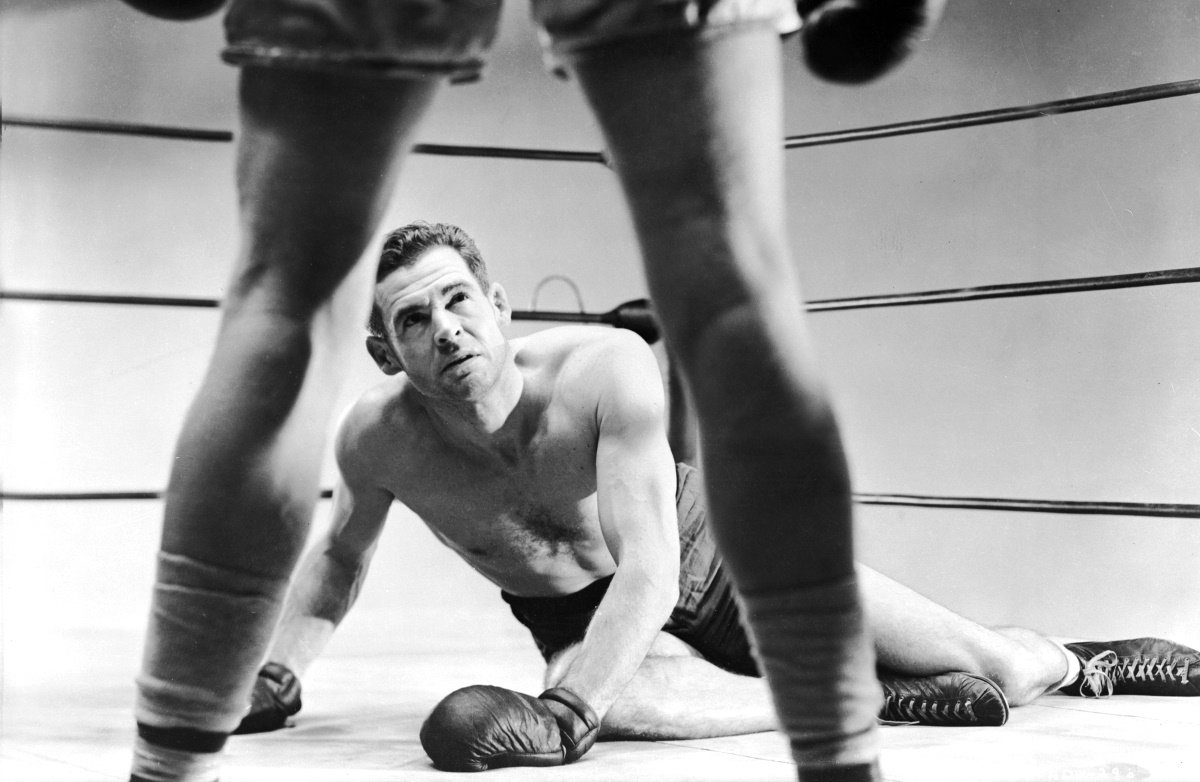 Robert Ryan was a well-respected actor with a legacy is intense supporting performances behind him when he finally earned top billing in The Set-Up (1949), a boxing drama seeped in the film noir world of corruption, betrayal, and brutality.

Ryan plays Bill “Stoker” Thompson, an aging, past-his-prime boxer who still dreams of a shot at the title despite his losing streak and his body breaking down. His loving wife (Audrey Totter at her most vulnerable) refuses to watch him get beaten in the ring once but he resolves to prove himself with one last win and puts everything into the bout, unaware that his manager (George Tobias) has sold him out to the mob. He has no idea he’s been paid to lose.

Robert Wise was an ambitious director working his way out of B-movies when he made the film. He learned his craft in one of the best film schools Hollywood had to offer, editing Orson Welles’ first movies and directing his first films for producer Val Lewton, who turned out sophisticated, shadowy genre pictures on B-movie budgets. His apprenticeship pays off with this both tough and tender little boxing noir.

Wise puts everything into this intimate production right from the opening credits, which play over a brief boxing match that ends with a KO in the first round. The rest plays out in real time (three years before High Noon became famous for doing the same thing). He makes the most of his low budget by reveling in the shabbiness of the locations: the smoke-filled arena filled with bloodthirsty fans, the cramped, crowded dressing room, the anonymous streets where Stoker’s wife wanders during the bouts.

Ryan brings his experience as a college boxer to the brutal fight scenes, which Wise shoots close-in with a fluid camera, while his performance shows us a hopeful man in a beaten-down body who holds on to his dignity at the risk of crossing a vengeful hoodlum.

It’s easily one of the greatest boxing films ever made. It won two awards at the Cannes Film Festival and filmmaker Martin Scorsese studied the film while making Raging Bull.

Wallace Ford plays as a sympathetic trainer and Percy Helton, Darryl Hickman, and James Edwards costar. The script is actually adapted from a narrative poem by Joseph Moncure March.

Also on Blu-ray and DVD and on SVOD through Amazon Video, iTunes, GooglePlay, Vudu and/or other services. Availability may vary by service.
The Set-Up [Blu-ray]
The Set-Up [DVD]

On Blu-ray and DVD, with commentary featuring Robert Wise and Martin Scorsese, recorded separately and edited together with periodic silences. It’s not scene specific but offers interesting production details and observations.