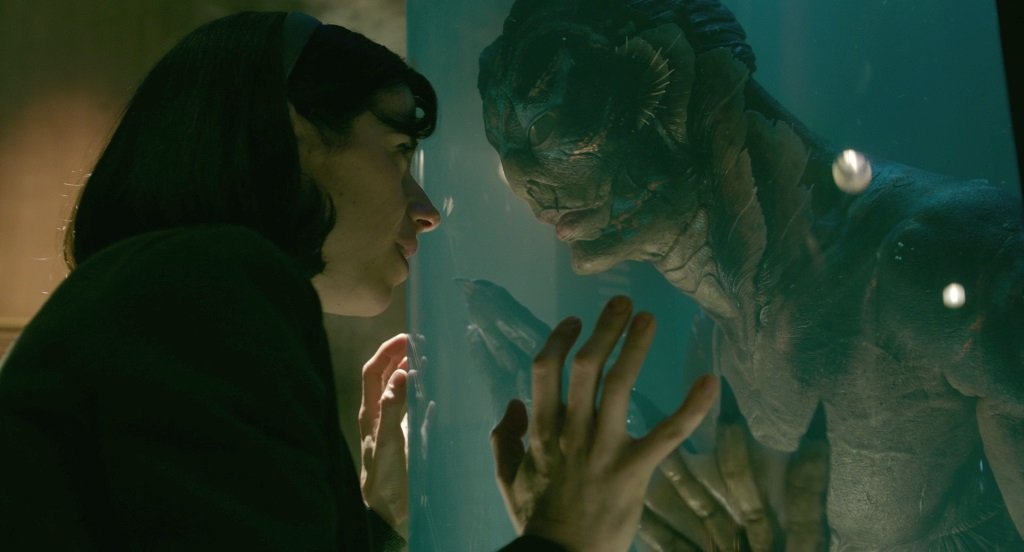 Guillermo del Toro’s The Shape of Water (2017, R), a monster movie turned romantic fantasy about a mute janitor (Sally Hawkins) and an amphibious creature held captive in a government lab, won four Academy Awards, including best picture and best director. It’s not just del Toro’s Beauty and the Beast story, it’s a tribute to Jack Arnold’s original Creature from the Black Lagoon and could be a sequel in its own right. It’s also a fantastical imagining of classic movie design in service to his vision of underdogs uniting to defeat a brutal tyrant in a Cold War atmosphere and a labor of love from a filmmaker who embraces the power of fairy tales.

It’s now on cable and video on demand and on DVD.

Two other Oscar winners are also new to VOD. I, Tonya (2017, R), the darkly comic take on the Tonya Harding (Margot Robbie), won best supporting actress for Allison Janney and the tender, gay love story Call Me by Your Name (2017, R) with Armie Hammer and Timothée Chalamet won for Oregon-raised James Ivory’s adapted screenplay. Also on DVD and at Redbox.

Benji (2018, not rated), a Netflix Original remake of the original adorable shaggy dog adventure, updates the family-friendly adventure for a new generation of kids. Director Brandon Camp is the son of Joe Camp, creator of the original 1974 movie, which is also streaming on Netflix.

In Justice League (2017, PG-13), the DCU answer to “The Avengers,” Batman and Wonder Woman (Ben Affleck and Gal Gadot) join forces with The Flash, Aquaman, and Cyborg to save the world after the death of Superman.

Available same day as select theaters nationwide are the comedies Furlough (2018, not rated) with Melissa Leo as a troublesome inmate and Tessa Thompson as a rookie guard and Dear Dictator (2018, not rated) with Michael Caine as an exiled Caribbean dictator in suburbia who helps an American teenager (Odeya Rush) overthrow the mean girls of her high school. Also new: The Forgiven (2018, not rated), a drama starring with Forest Whitaker as Desmond Tutu.

The animated feature In This Corner of the World (Japan, 2016, PG-13, English dub and subtitles versions) is a wonderfully delicate portrait of civilian life in rural Japan during World War, largely avoiding politics in its humane portrait of those who survive. Reviewed on Stream On Demand here.

The Legacy of a Whitetail Deer Hunter (2018, not rated), a comedy about a father-son bonding weekend starring Josh Brolin and Danny McBride, comes direct to Netflix from its world premiere at SXSW.

True stories: Take Your Pills (2018, not rated) looks at the (ab)use of Adderall and Ritalin by students and high-pressure professionals and the documentary mini-series Wild Wild Country takes on the story of the Rajneesh commune created in Central Oregon in 1981 and the culture clash that turned into a hostile takeover.

Kid stuff: On My Block: Season 1, a drama about four friends in South Central LA, is a high school series for teens and tweens. Also new: animated fantasy Children of the Whales: Season 1 from Japan (dubbed and subtitled versions) and animated adventure comedy Stretch Armstrong: The Breakout for younger kids.

Romanzo Criminale: The Complete Series (Italy, 2008-2010, with subtitles) is one of the most popular TV shows ever made in Italy, a real-life crime story turned into a sleek but rough gangster saga of Rome in the 1980s. Reviewed on Stream On Demand here.

Originally produced for Disney Channel, Nightjohn (1996, PG-13) is a powerful drama about an enslaved 12-year-old girl in the ante-bellum South who learns to read, a “crime” punishable by death. Director Charles Burnett won an honorary Oscar this year.

Peter Mullan and Sam Neill star in the Scottish golf drama Tommy’s Honour (2017, PG) and Miley Cyrus and Demi Moore are daughter and mother in the coming-of-age comedy LOL (2012, PG-13).

Pioneering primatologist Jane Goodall tells her own story in the award-winning documentary Jane (2017, PG), which features recently-discovered footage of her first expeditions to Africa.

Blade of the Immortal (Japan, 2017, R, with subtitles), the 100th film from Miike Takashi, pushes samurai action to extremes. Reviewed on Stream On Demand here.

Also new: Denzel Washington is the father of a dying boy who takes an emergency room hostage in John Q (2002, PG-13) and Hugh Grant is a cartographer in an eccentric Welsh village in the romantic comedy The Englishman Who Went Up a Hill But Came Down a Mountain (1995, PG).

Also new: Before I Fall (2017, PG) based on the young adult novel by Lauren Oliver and Matt Damon in The Good Shepherd (2006, R), the story of the origins of the CIA from director Robert DeNiro.

Spencer Tracy is the exasperated Father of the Bride (1950) in the classic comedy co-starring Joan Bennett and Elizabeth Taylor.

FilmStruck celebrates Director the Week Christopher Guest with his four comic mockumentaries, from Waiting for Guffman (1996, R) to For Your Consideration (2006, PG-13), and curates a collection of Texas films, including Giant (1956, G) with Elizabeth Taylor, Rock Hudson, and James Dean, and Wim Wenders’ Paris Texas (1984, R) (reviewed in Stream On Demand here).