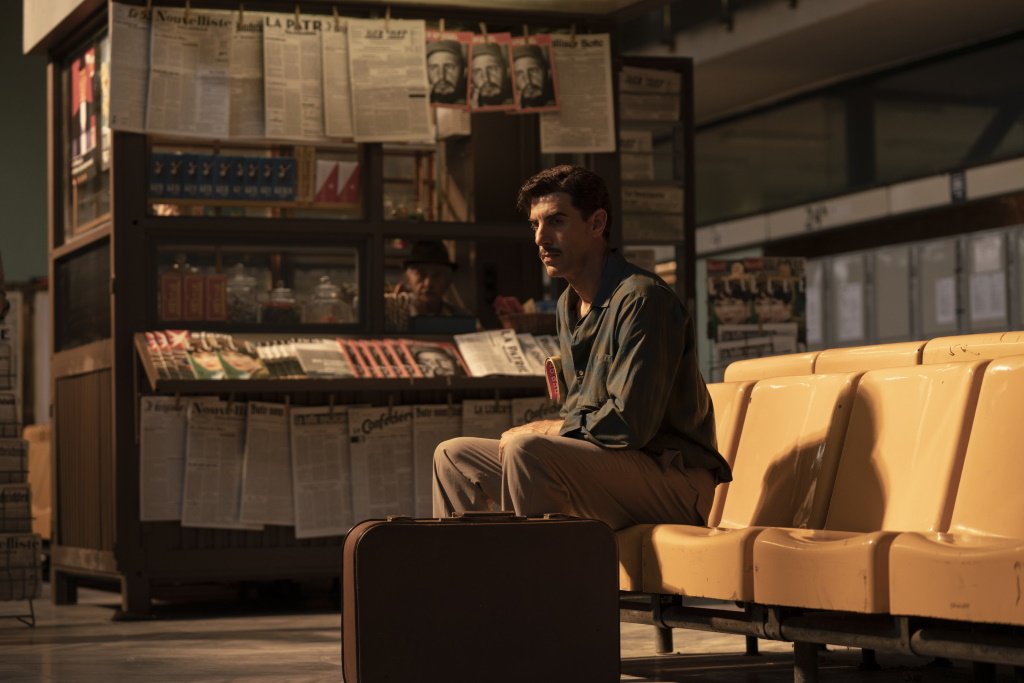 Sacha Baron Cohen takes a rare dramatic role in “The Spy” (2019), a new Netflix Original limited series based on the true story of Eli Cohen, an accountant who infiltrated Syria as a deep cover Mossad agent for six years in the 1960s. The six-part series is written and directed by Gideon Raff, co-creator of “Homeland” and writer/director of “The Red Sea Diving Resort.” Streaming on Netflix.

“Wu-Tang: An American Saga” dramatizes the origins and rise of the hip-hop group, from the culture of crime in 1990s New York to a veritable cultural dynasty. Wu-Tang founder RZA created and co-writes the series and Aston Sanders (Moonlight) and Shameik Moore (Dope) headline the sprawling cast. Three episodes now available, new episodes each Wednesday.

Also on Hulu is the documentary “Untouchable” (2019, not rated), which digs into the Harvey Weinstein scandal and the culture of power that protected him for so long.

Kaitlyn Dever and Beanie Feldstein play overachieving students who throw caution to the wind on the last night of high school in “Booksmart” (2019, R). Actress Olivia Wilder makes a sure directorial debut with this raunchy and smart buddy comedy. On Cable on Demand and VOD, also on DVD and at Redbox

Cult pick: Nicolas Cage gives one of his most entertainingly unhinged performances in the dark comedy “Vampire’s Kiss” (1989, R) as a man who thinks he’s turning into a vampire. On Amazon Prime Video.

Classic pick: Ida Lupino offers a surprisingly sympathetic portrait of her title character in “The Bigamist” (1953), an independently produced drama about a salesman (Edmond O’Brien) with a double life married to two women (Joan Fontaine and Lupino). All three characters are invested with a strength and complexity rarely seen in films with such controversial themes. It’s been newly restored and streams free on Kanopy.

Chris Hemsworth and Tessa Thompson are the new agents in “Men in Black: International” (2019, PG-13), the colorful but generic revival of the sci-fi comedy franchise. Also new:

Jack O’Connell stars in the gritty British prison drama “Starred Up” (2013, not rated) as a kid incarcerated in the same facility as his volatile career-criminal father (Ben Mendelsohn).

Streaming TV: “The Walking Dead: Season 9” (TV-MA) is available a month before the tenth season debuts on AMC. Also new:

International affairs: a political and his wife face secrets from their compromising past in the thriller “Unbridled” (Spain, 2019, TV-MA, with subtitles). Also new:

And a few highlights from the older titles added to the library this month:

Before he made “What We Do in the Shadows” and “Thor: Ragnarok,” New Zealand filmmaker Taika Waititi directed and starred in the bittersweet comic drama “Boy” (2010, not rated).

“That Obscure Object of Desire” (France, 1977, R, with subtitles), a surreal story of love and obsession, is the final feature from Luis Bunuel. Fernando Rey stars as a patronizing bourgeois cad who tries to buy the affections of an ambiguous beauty (played by two different actresses, cool French model Carole Bouquet and sensual Spanish actress Angela Molina).

International affairs: “Manuscripts Don’t Burn” (Iran, 2013, not rated, with subtitles) is one of the most provocative and searing political dramas to come from Iran. Also new:

True stories: Martin Scorsese is one of the producers of “Surviving Progress” (2011, not rated), which challenges the sustainability of the current culture. Also new:

True stories: “After the Screaming Stops” (2018, not rated) chronicles the reunion of twin brothers Luke and Matt Goss of the Brit boy band Bros 28 years after their final stage performance together (Prime Video and Hulu).

Dennis Hopper is a legendary sixties radical and prankster and Keifer Sutherland the humorless FBI agent assigned to escort him to prison in the comedy “Flashback” (1990, R) (Prime Video and Hulu).

Gary Carr plays the enigmatic New Orleans trumpeter Buddy Bolden in the biopic “Bolden” (2019, R), which proclaims him the “inventor of jazz.”

The delightful, low-key comic drama “Breaking Away” (1979, PG), starring Dennis Christopher as a bicycle-racing blue collar kid in a college town, was nominated for five Oscars and won for its original screenplay.

True stories: “The First Monday in May” (2016, PG-13) follows creation of “China: Through The Looking Glass,” the most attended fashion exhibition in the history of The Metropolitan Museum of Art.

More streaming TV: “Into The Dark: Pure,” the twelfth and final episode in the anthology horror series, comes from by Hannah Macpherson, creator of the Verizon horror series “T@gged” and “The Purge: Season 1” arrives a month before the second season begins on SyFy.

The offbeat drama “Can You Ever Forgive Me?” (2018, R) features Melissa McCarthy and Richard E. Grant in Oscar-nominated performances.

BroadwayHD presents two Tony-nominated Broadway musicals from the early 1980s:”Sophisticated Ladies” (1982), a celebration of the music of Duke Ellington with Phyliss Hyman and Paula Kelly and featuring Mercer Ellington conducting the Duke Ellington Orchestra, and “Tintypes” (1980), a musical survey of America from the late 19th century to World War I with Lynne Thigpen and Jerry Zaks.

Kanopy is available through most public library systems