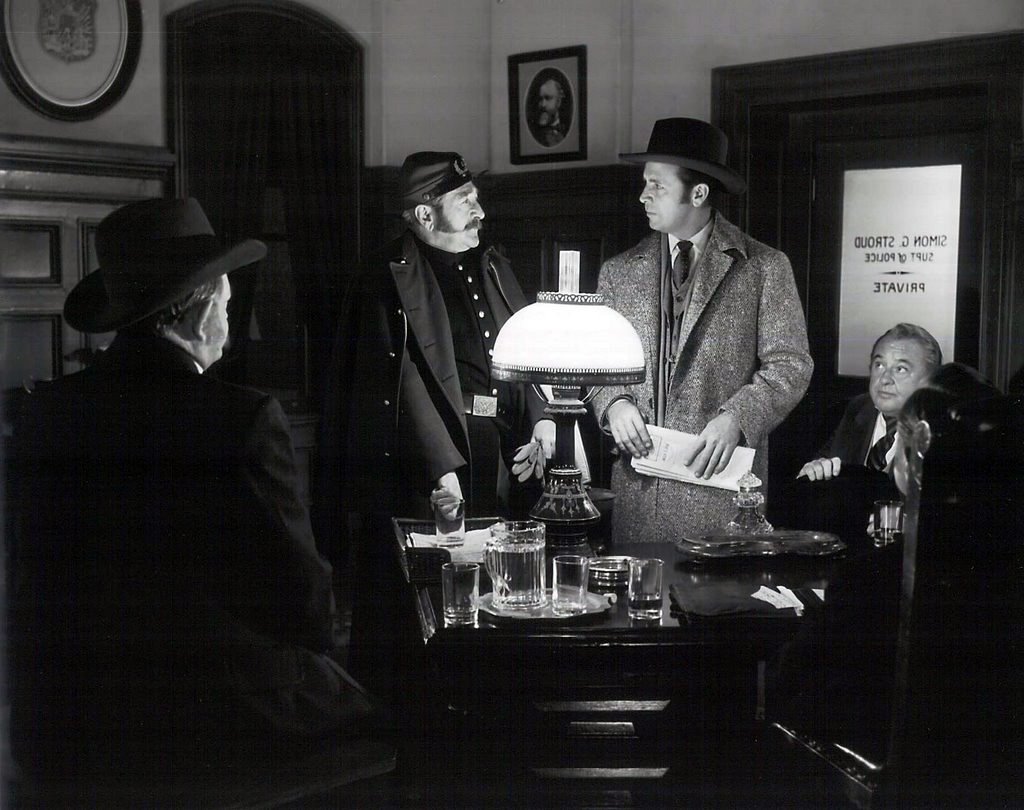 Anthony Mann’s The Tall Target (1951) is a rare period piece noir. This one is set in 1860 and the tall target of the title is President-elect Abraham Lincoln.

Dick Powell plays the lone police detective who believes in the conspiracy to assassinate Lincoln on his journey to be sworn in as President and, in a fit of pique, slams his badge on the desk and storms out of the station to board the midnight train to the capitol. That his gesture cripples his effectiveness—without his badge, few believe that he is a cop, let alone on a mission to stop a murder—is just one of the nice touches in a film full of dynamic images and marvelous grace notes.

The Tall Target is a low budget production by MGM standards but no B-movie; there is great production value here, but with so much of the action on the train, it’s saved for city scenes, the train rolling through a period-perfect town bustling with life. Shots of the train, backlit and charging through the night, are magnificent. Unexpected period details—the train is pulled into the Baltimore station by horses because of an ordinance to keep it from blowing smoke through the middle of town—keeps enlivening the action with stranger-than-fiction flourishes.

But it’s Mann’s control and confidence as a director that makes it so irresistible: a fight under the wheels of a train about to leave the station, the camera peering through the spokes and pistons and blasts of steam; a measured walk down the aisle of a train looking for suspicious characters transformed into a hijacking with a simple camera move; a mysterious passenger dropped off in the inky shadow of night while the train is delayed for an important parcel; verbal games between Powell (whose character is named, I kid you not, John Kennedy) and various suspects, blowhards and bystanders, especially with Adolph Menjou as an hospitable officer traveling with his men to Baltimore.

What the film really lacks is a cast to sell the stakes of the drama. Powell lacks the grit and hard drive of a true a Mann hero and Marshall Thompson hasn’t the presence to give his cultured Southern plantation son a sense of command, let alone make him threatening, but Will Geer (soon to be blacklisted for his political activism) is note-perfect the ubiquitous train conductor whose entire being is focused on getting the train to run smoothly and on time.

It was Mann’s last film noir; he had essentially made the leap from urban crime director to western director with Winchester ’73 the year before and for the rest of the decade he helped transform Jimmy Stewart from lovable leading man to ruthless man of the west.

Also on DVD and on SVOD through Amazon Video, iTunes, GooglePlay, Fandango, Vudu and/or other services. Availability may vary by service.
The Tall Target (Warner Archive) [DVD]