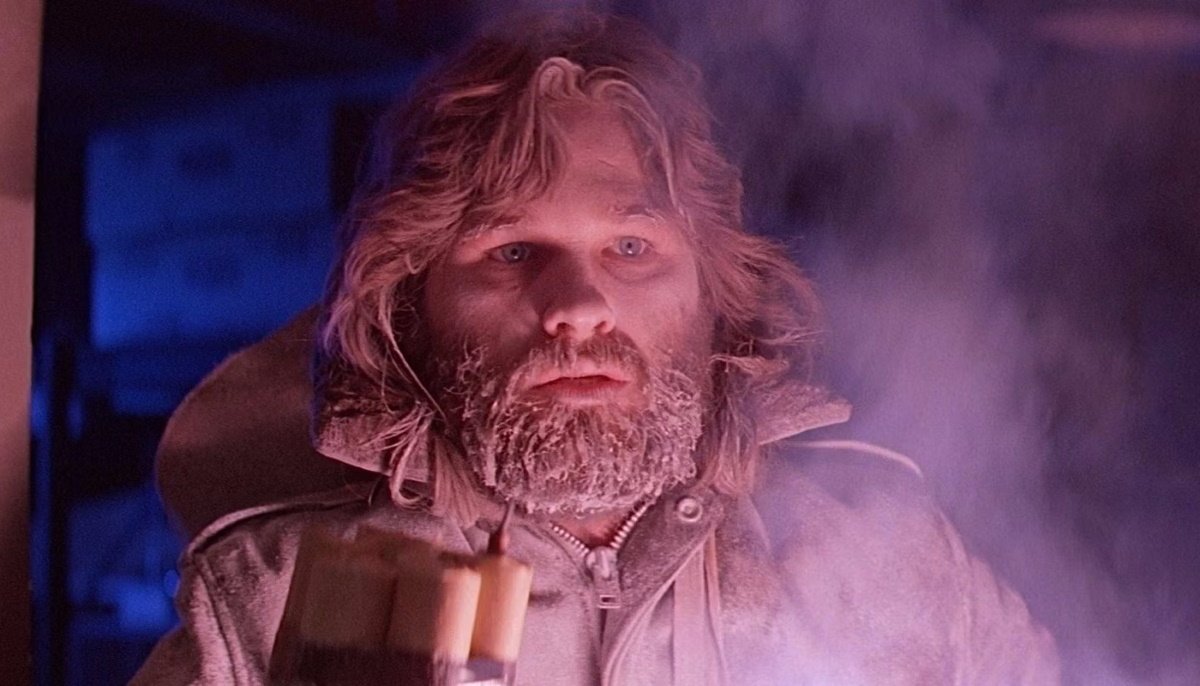 The Thing (1982) is an alien invasion horror masterpiece, a kind of survivalist chamber drama set in a remote research station in the icy Arctic where a small group men without women are confronted by an insidious takeover.

John Carpenter directs what is ostensibly a remake of the 1951 classic The Thing from Another Planet, but in fact Carpenter and screenwriter Bill Lancaster return to the original short story by John W. Campbell in which a creature from outer space mimics its prey. In this film, the dozen men at an isolated Antarctic research station become genetic fodder for an alien creature that fits in by becoming an exact physical duplicate of the native species it takes over. Kurt Russell is the reclusive chopper pilot that reluctantly steps up to lead the dwindling survivors when the chain of command fails (Donald Moffat is marvelous as the veteran officer in over his head).

Carpenter has long embraced filmmaker Howard Hawks, who produced and many ways put his own authorial stamp on the 1951 science fiction classic, and he pays tribute to the original in the opening credits and in the discovery of the alien space craft frozen in the Antarctic ice. Carpenter, however, offers an insidious take on the alien and completely rethinks the dynamics of the loners forced to unite under attack. Where Hawks found strength in the group of professionals pulling together in common cause, Carpenter explores the suspicion and mistrust. His work with actors is often forgotten and I think this is his best, most well-sculpted example of ensemble acting. Wilford Brimley, T.K. Carter, David Clennon, Keith David, Richard Dysart, Charles Hallahan, and Richard Masur are among the stand-out performers.

And, of course, Carpenter had technology and movie magic unavailable to Hawks. Without the aid of CGI, special effects artist Rob Bottin and his team creates imagery like nothing audiences had seen before. We watch the creature absorb, replicate, and morph in front of our eyes, as if it’s evolving in real time. The suspicion is palpable—the creature could be anyone and anything—and freaky horror of the gooey, grotesque transformations is both nightmarish and surreal, and it gives the tension of the human drama startling punctuation.

The Thing is a truly paranoid horror film on the level of Invasion of the Body Snatchers, but completely isolated in a desert of snow which Carpenter uses to great effect. It had the unfortunate luck, however, of arriving in theaters soon after the release of E.T. (1982), Steven Spielberg’s charming fairy tale of a benevolent alien stranded on Earth, and the Spielberg-produced suburban horror film Poltergeist (1982). Audiences at the time were put off by the grotesque imagery and the paranoia and ambiguity in the storytelling. Decades later, it is acknowledge as a visionary science fiction classic and one of Carpenter’s greatest films.

There’s a fascinating backstory from producer Stuart Cohen, who charts how Carpenter reinvented and essentially “saved” the film during production downtime, on the blog The Original Fan.

Shout! Factory’s two-disc Collector’s Edition Blu-ray is mastered from a new 2K scan of the interpositive supervised by director of photography Dean Cundey and features a new 5.1 DTS-HD soundtrack mix. Along with the previously-released supplements, this edition features commentary tracks by Dean Cundey and co-producer Stuart Cohen and over two-and-a-half hours of video interviews with director John Carpenter (interviewed by Mick Garris), film editor Todd Ramsay, visual effects supervisor Peter Kuran, Alan Howarth (who contributed uncredited to the sound effects and music), author Alan Dean Foster (who penned the novelization), and many of the supporting actors.