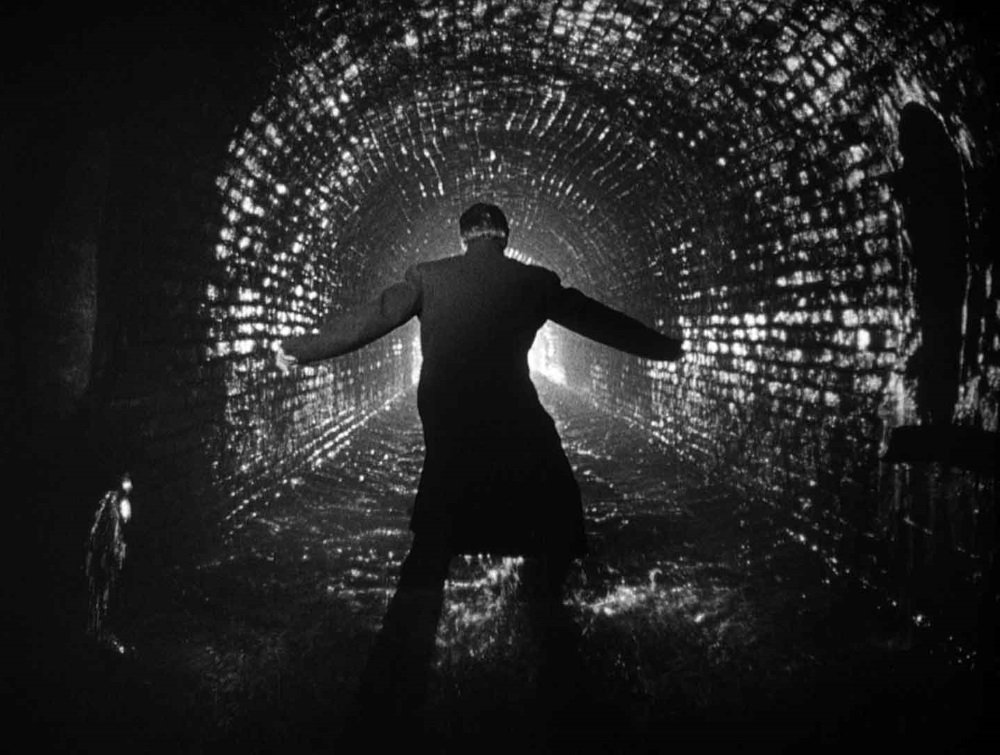 Carol Reed’s continental film noir The Third Man (1949), written by Graham Greene and starring Joseph Cotten as a cynical American pulp novelist playing detective in the rubble-strewn underworld of post-war Vienna and Orson Welles as a charming but ruthless black marketeer, is one of the true classics.

The film is directed by Reed but dominated by Welles. His irascible black marketeer Harry Lime, a charming scoundrel with the most seductive justification for his inhuman schemes, doesn’t appear fully two-thirds into the film (and what an entrance!), but his unseen presence falls across the entire film, beginning with his funeral. Holly Martins, a down-on-his-luck pulp novelist played with headstrong bravado by Cotten, arrives in Vienna to join his school chum in a get rich quick scheme, only see him lowered into the ground in a ceremony attended by shady figures shadowed by British Major Calloway (Trevor Howard). Holly refuses to believe Calloway’s tales of Lime’s criminal reputation or the suspicious “accident” that killed Lime. Convinced Harry was murdered, he joins forces with his friend’s grieving mistress Anna (Alida Valli) and plays boy detective, a hopelessly naïve lamb in a city of starving lions.

Carol Reed is a smart filmmaker—clever, precise, technically sound, cinematically sure – and his best films are thoughtful, painstakingly determined works of stylistic sureness. There’s an element of show-off quality in The Third Man—it’s a stylistic tour de force of bravura lighting, brilliant location shooting, dynamic imagery, and sharp angles throwing the world off kilter—but Reed rises to the challenge of Greene’s screenplay. He matches the sardonic wit with a rolling pace and the cynical story with an atmosphere of high culture deflated by the desperation of poverty and enlivened by rogues gallery of profiteers and petty crooks. The collision of quaint mittel-European architecture and touristy old-country clichés with bombed out city blocks and craters blasted in now leveled vacant lots and the mix of German expressionist exaggeration and droll, understated British wit—gangster speak by way of drawing room comedy—creates a continental crime film, a European response to American film noir. Holly makes for a hilarious stereotype through European eyes, the bumbling American cowboy in the sophisticated old world and a spirited naif new to international politics, and it captures a time when the United States was just taking its place as the dominant power in the post-war world

The rich atmosphere of Reed’s Vienna, with local aristocrats clinging to whatever scraps of culture they can grab (they ask the decidedly uncultured horse opera novelist Holly to give a speech on the state of modern literature) while petty thieves and harried cops scurry around the edges, overcomes his tendency to overwhelm a scene with sheer cinematic bustle. This film is lively, always moving forward, constantly bubbling with mystery and suspicion and secrets, but the characters are always driving the film.

It earned an Academy Award for Robert Krasker’s brilliant cinematography, a BAFTA for Best British Film, and the Grand Prize of the 1949 Cannes Film Festival. Fifty years later the BFI named it the greatest British film of the 20th Century and it placed in the number 63 spot in the 2022 Sight & Sound Greatest Films of All Time poll.

And that zither score, a delightfully playful and quaint sounding music by Anton Karas that captures the stereotype of old Europe and contrasts beautifully with the mercenary culture in front of us, may never stop swirling through your mind.

In black and white, not rated

The film was briefly released on Blu-ray in 2008 from Criterion, an edition long out of print (it fetches high prices as a collectible). Lionsgate’s release is mastered from the StudioCanal restoration and features a commentary track with Guy Hamilton (the film’s assistant director) and Angela Allen (2nd Unit Continuity) sharing anecdotes with actor/director/Orson Welles biographer Simon Callow, an interactive “Third Man Tour” of Vienna (with clips comparing location then and now), and archival audio-only interviews with Joseph Cotten and Graham Greene among the supplements, which also includes a featurette on the zither, a radio show, and a 20-page booklet with an overview essay by Charles Drazin.

The Criterion edition features two commentary tracks (one by the always interesting Steven Soderberg with screenwriter Tony Gilroy, providing a filmmaker’s take on the film, and the other by film scholar Dana Polan), the interesting feature length documentary “Shadowing the Third Man” by director Frederick Baker (who resorts to an annoying technique of projecting extended film clips on sewer grates and cobblestone curbs and other objects), the 30-minute “Who Was The Third Man,” an Austrian TV documentary that revisits the locations and includes German-dubbed clips of the film, an abridged audio recording of Graham Greene’s “Third Man” treatment read by actor Richard Clarke, the alternate opening voice-over by Cotten, and two radio shows – “A Ticket to Tangiers” from the 1951 broadcast of “The Lives of Harry Lime” series, written and performed by Orson Welles, and the complete 1951 Lux Radio Theater adaptation of “The Third Man” featuring Joseph Cotten.