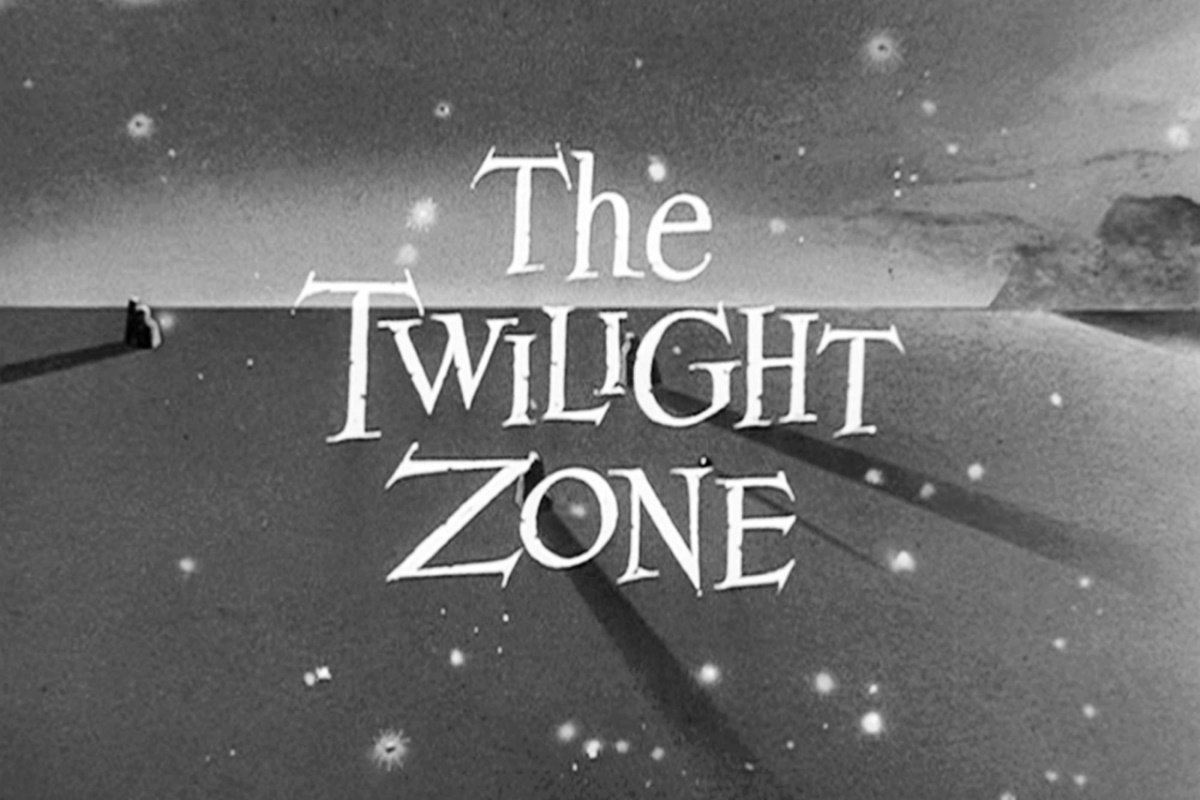 Submitted for your approval: Rod Serling, a writer. Ambitious, talented, turning out the finest television plays of the 1950s while chafing against the censorship of meek advertisers. His ingenious solution: create a series framed in the tales of the fantastic, and slip in the social politics and barbed human dramas behind the façade of fantasy. The result: a TV series so iconic and influential that its very title has become a cultural catch-phrase. We give you The Twilight Zone (1959-1964), the most celebrated and respected anthology series of all time.

Serling was one of the most celebrated writers on television when he created the series, with three Emmy awards to his credit, but genre fiction was not part of his resume. Not that you’d notice by the high quality of his scripts. In the first season along, he brought a capacity for compassion and sensitivity to human drama to “One For the Angels,” “Time Enough at Last,” and the poignant “A Stop at Willoughby,” and a social conscience to such episodes as “The Monsters Are Due on Maple Street,” his take on the paranoid hysteria of the red scare.

The half hour format gave Serling and his writers (which include genre legends Charles Beaumont and Richard Matheson) a format in which to hone their scripts into the television equivalent of short stories, with economy and focus, and it drew out the best in the directors, who were rarely showy but almost always creative in their approach. Most importantly, the show never sacrificed character to ideas. The series is so iconic and influential that its very title has become a cultural catch-phrase. These episodes remind us why.

The first season features the original opening credits sequences set to the swirling harp of Bernard Hermann’s dreamy original theme, with Serling narrating the introductions off camera. Season Two introduced with the striking avant-garde theme song by Marius Constant that became synonymous with the eerie and the unexplained, and it marked the first time that Rod Serling stepped into each episode to give his trademark introductions. It also marked the first—and only—time that some episodes were shot in videotape to save money.

Highlights of Season Two include “Nick of Time,” with William Shatner as a man who becomes a slave to a fortune-telling machine, and two of the finest episodes of the entire series: “The Eye of the Beholder” and “The Invaders,” a pair of perfectly shaped TV scripts perfectly suited to the small screen and the 30 minute format, and brilliantly directed by Douglas Heyes, who creates a hermetically sealed world so unique to those stories that he sucks the viewer into his carefully created perspective, just to spring the reveal at the end.

Other highlights include “A Game of Pool” with Jack Klugman as a poolroom shark who plays for his life against the legendary dead Fats Brown (Jonathan Winters, excellent in a rare dramatic role), “The Midnight Sun” (the end of the world comes with a sweltering whimper, not a bang), the sweetly sentimental “Kick the Can” (which Spielberg remade in Twilight Zone: The Movie), Richard Matheson’s haunting “Little Girl Lost” (which may have provided inspiration for Poltergeist), “The Dummy” with Cliff Robertson as a ventriloquist tormented by a prop with a mind of its own, and the Ray Bradbury-scripted “I Sing the Body Electric.”

Season Four switched to an hour-long format, which proved to be far less effective for the kinds of stories and punchy dramatic Rod Serling was so good at, and a much shorter season. But it has its highlights, notably the Serling-scripted “On Thursday We Leave for Home,” starring James Whitmore as a spaceship captain on a stranded outpost whose command is threatened by a rescue mission, the Richard Matheson-scripted “Death Ship” with Jack Klugman and Ross Martin, and the Charles Beaumont-scripted “Miniature” with Robert Duvall, an episode that was pulled from syndication for years due to an ultimately dismissed lawsuit. Just for fun, the season finale “The Bard” stars Jack Weston as a hack television writer who gets help from the ghost of Shakespeare and costars Burt Reynolds as a macho actor with script notes.

Season Five returned to the familiar and more effective half-hour format and the quality of the shows improves along with it. The season opens with a trio of highlights: “In Praise of Pip,” a classic Serling tale of remembrance and redemption; “Steel,” a Richard Matheson-scripted drama with Lee Marvin as the manager of a broken down android boxer; and Matheson’s “Nightmare at 20,000 Feet,” a paranoid thriller with William Shatner as a terrified airline passenger who sees a gremlin tearing apart the jet’s wing.

Other highlights include “Living Doll” with Telly Savalas (“I’m Talky Tina and I’m going to kill you”), “The Masks” directed by Ida Lupino; and “The Encounter,” one of the most overt pieces of social commentary in the series.

Missing from all TV syndication and streaming packages is “An Occurrence at Owl Creek Bridge,” the 1961 short film directed by Robert Enrico (based on the short story by Ambrose Bierce) about a civil war prisoner’s delirious escape. It was the only program that was not produced for the series—it was picked up after winning the Palme d’Or for short subject at Cannes and the Academy Award for live action short subject—and it was only shown once as the series finale. It is available to stream free on Hoopla, which is available through most public and college library systems, and on the Blu-ray and DVD releases of the series.

The Twilight Zone won three Prime Time Emmys, including two for Rod Serling’s writing, and three Hugo Awards. It was revived on TV three time, most recently by producer Jordan Peele, and inspired a 1983 movie.

156 episodes over five seasons, in black and white.

The Blu-ray and DVD editions feature restored episodes and generous supplements. There are commentary tracks on scores of episodes featuring both historians and original actors, dozens of retrospective interviews, radio adaptations of select episodes, archival interviews and programs, and other supplements.