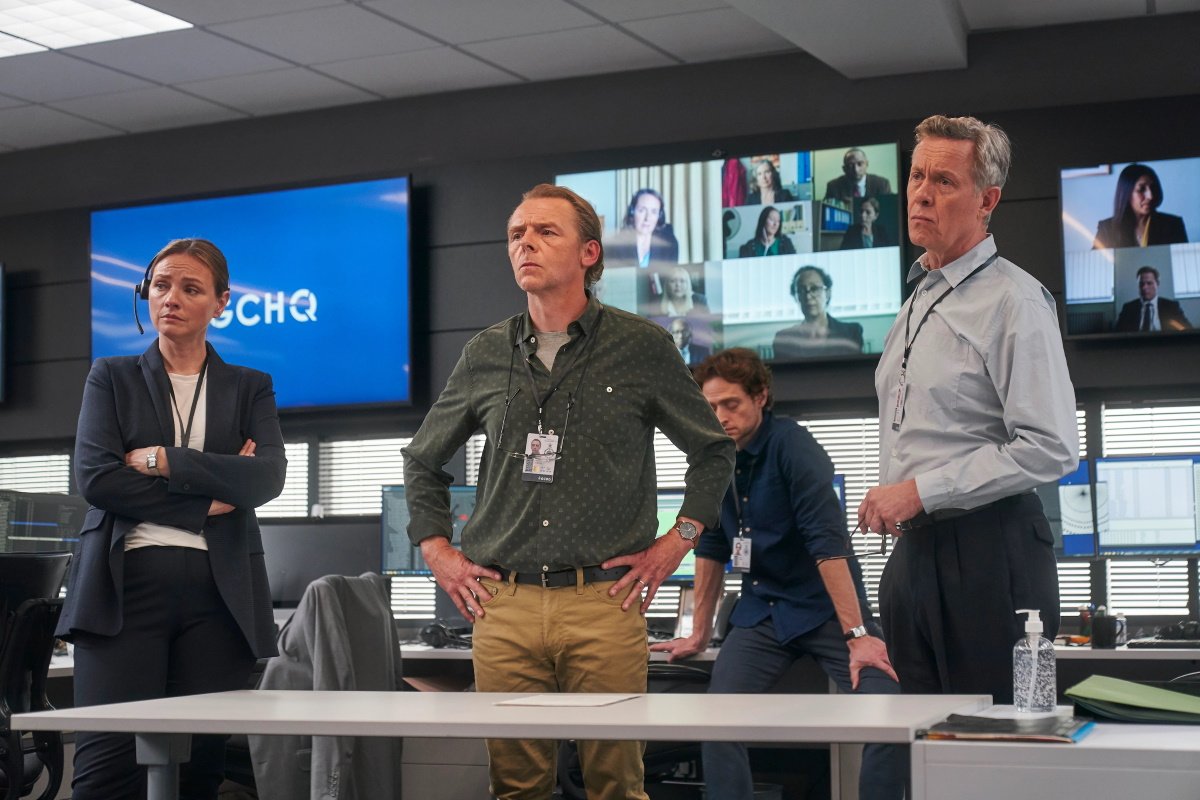 The British espionage thriller “The Undeclared War: Season 1” (not rated) drops England’s top computer analysts (led by Simon Pegg) into a high-stakes game of cyber warfare when the country is hit with a series of cyber-attacks in the run-up to the 2024 election. Hannah Khalique-Brown plays the rookie on the veteran team, which includes Alex Jennings and Mark Rylance, and Adrian Lester plays the Prime Minister. It’s from Peter Kominsky, who brought the superb “Wolf Hall” to the screen and spent three years researching the state of cyber security and hacking for this project. The entire six-episode series streams in its entirety. (Peacock)

Sharon Horgan created and stars in “Bad Sisters: Season 1” (TV-MA), a mix of dark comedy and murder mystery costarring Anne-Marie Duff, Eva Birthistle, Sarah Greene and Eve Hewson as siblings. Set on the coast of Ireland, it opens with the funeral of a bad husband (Claes Bang) and gets complicated when it suspicions arise that one of them may be a murderer. Two episodes available, new episodes on Fridays. (Apple TV+)

Tatiana Maslany is “She-Hulk: Attorney At Law: Season 1” (TV-14), Bruce Banner’s cousin and a lawyer who specializes in superhuman-oriented cases after she inherits some of his powers. Mark Ruffalo and Benedict Wong reprise their MCU roles as Hulk and Wong in this mix of legal drama, superhero show, and comedy, and Tim Roth, Jameela Jamil, and Ginger Gonzaga costar. New episodes on Wednesdays. (Disney+)

Garret Dillahunt and Martha Plimpton star in “Sprung: Season 1” (TV-PG), a comedy about recently-released criminals who band together to use their skills and expertise for good. Two episodes available, new episodes on Sundays. It’s from “My Name is Earl” and “Raising Hope” creator Greg Garcia. Free with ads. (Amazon Freevee)

Jerrod Carmichael makes his directorial debut and stars in “On the Count of Three” (2022, R), a darkly comic buddy film about two best friends on the last day of their lives. Christopher Abbott, Tiffany Haddish, JB Smoove, and Henry Winkle costar. (Hulu)

Based on a story by Joe Hill, Scott Derrickson’s horror film “The Black Phone” (2022, R) stars Ethan Hawke as the villain and Mason Thames as a child who can speak to his earlier victims from a disconnected telephone. Streams on Peacock before VOD. (Peacock)

The five-part docuseries “Children of the Underground: Season 1” (TV-MA) introduces audiences to the complicated story of Faye Yager, who in the 1980s built a vast underground network to help mother and their children escape when the courts failed to protect them from the abuse of husbands and fathers. It put her on the FBI’s Most Wanted list. All episodes streaming. (Hulu)

Patton Oswalt is a father whose efforts to connect with his distant son inadvertently leads to an awkward internet romance in the comedy “I Love My Dad” (2022, R). Also new:

In the limited series thriller “Echoes” (TV-MA), Michelle Morgan plays identical twins who whose intertwined lives start to unravel when one of them disappears and the other gets tangled in a conspiracy. (Netflix)

“Dope“ (2015, R) is a quirky tale of hip-hop-loving high school geeks from Inglewood with sarcastic banter and comic escapades.

True stories: “Untold: The Girlfriend Who Didn’t Exist“ (TV-MA), about All-American football star Manti Te’o, kicks off the second series of documentaries on unusual stories from the world of sports. Also new is the self-explanatory “Inside the Mind of a Cat“ (2022, TV-PG).

International TV: the spy thriller “Kleo: Season 1“ (Germany, TV-MA, with subtitles) follows the efforts of a former East German agent to find out who betrayed her and take revenge. Also new:

Amandla Stenberg stars as a black teenager who witnesses the shooting death of a childhood friend by a nervous young patrolman in “The Hate U Give” (2018, PG-13).

True stories: the ten-part docuseries “Legacy: The True Story of the L.A. Lakers“ (not rated) looks back at the transformation of the sports franchise into one of the dominant NBA teams in the 1980s.

International TV: the romantic comedy “Love Revolution: Season 1“ (South Korea, with subtitles) is a live-action adaptation of the popular webtoon.

James Caan, who passed away in July, played the head of a high-tech gang of jewel thieves in Michael Mann’s steely crime thriller “Thief“ (1981, R). The actor proclaimed it his favorite role.

“Orphan: First Kill“ (2022, R) is a prequel to the horror film with Isabelle Furhman playing a 12-year-old version of the homicidal orphan.

International TV: the lives of five strangers dealing with loss intersect during group therapy in the feel-good drama “When You Least Expect It: Season 1“ (Spain, not rated, with subtitles).

Ryan Kwanten and J.K. Simmons star in “Glorious“ (2022, TV-MA), a horror film that plays out in a rest stop bathroom. (AMC+ and Shudder)

The four-part documentary “The Diana Investigations“ (not rated) reexamines the death of Princess Diana 25 years later.

Zhang Yimou’s “Shadow“ (China, 2018, with subtitles) is a costume thriller of warfare and palace intrigue with magnificent action scenes.