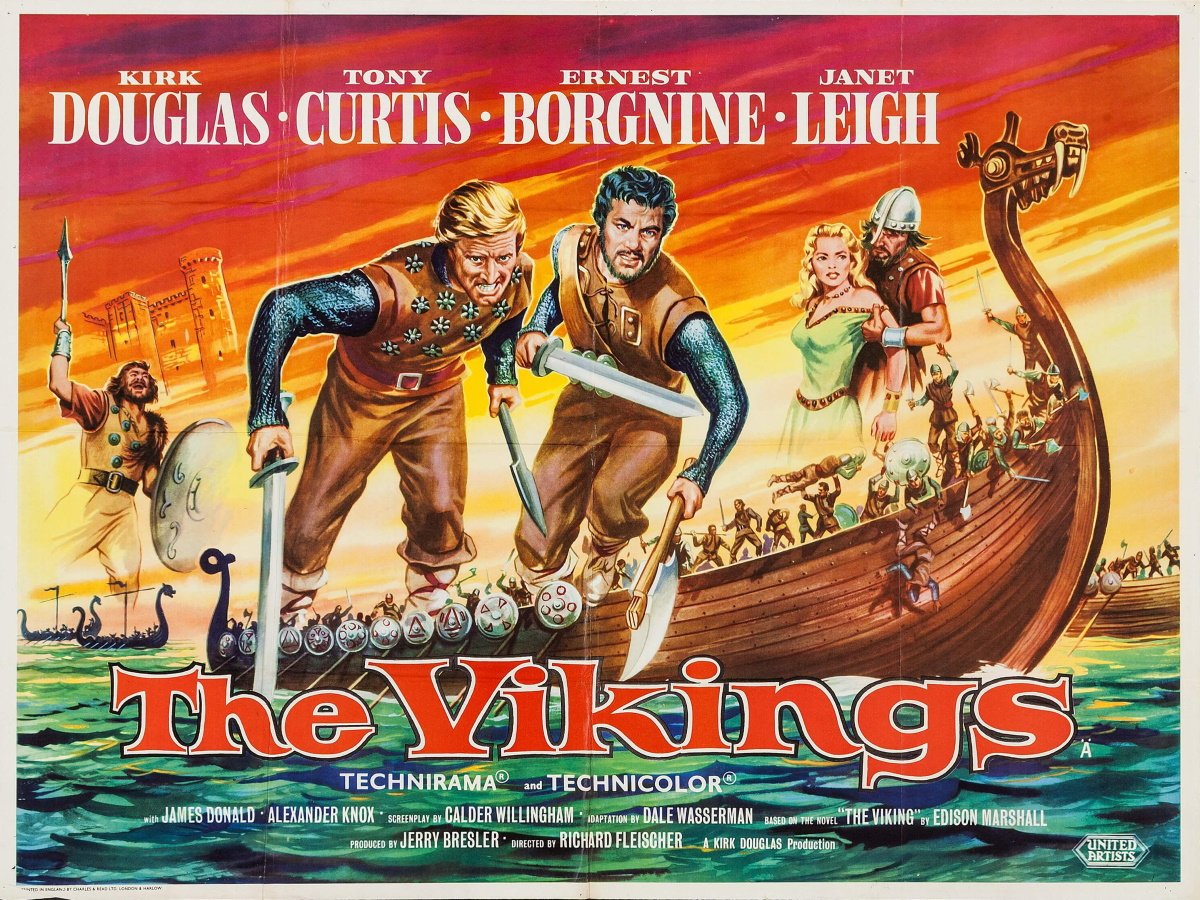 Set in the Middle Ages, when the Vikings pillaged the English coast, The Vikings (1958) is pure barbarian fantasy

Kirk Douglas produced this trend-setting barbarian epic and took the showiest, most aggressive role: lusty Viking Prince Einar, the “only son in wedlock” of King Ragnar (a cackling, wild-eyed Ernest Borgnine). With jagged scars down his face and a milky white blind eye that almost glows in his skull, Douglas has a rowdy time battling his defiant slave (Tony Curtis) for the hand of a beautiful Welsh Princess (Janet Leigh) betrothed to the King of England.

The slave Eric played by Curtis is not only the illegitimate heir to the British throne, he’s the bastard son of Ragnar, and thus half-brother to Einar. It’s pure Hollywood hokum, sure, with an absurd amount of bearskin melodrama and medieval conspiracy packed into a gorgeously filmed blood and thunder adventure, but it is spectacular hokum. Douglas grins a ferocious smile as he works his cave-man seduction technique on Leigh and snarls his threats to pretty boy Curtis after losing an eye to the scrappy little slave.

The great cinematographer Jack Cardiff fills the screen with Technicolor splendor, from the lush blue waters and thick green forests of the Norway location to the homely castle hanging on to Britain’s craggy windswept coast to the obligatory Viking funeral. Faced with an absurd story, journeyman director Richard Fleischer goes for the gusto in brawling Viking parties, furious sieges, clanging broadsword battles, and yes, a grand Viking funeral.

The sexual politics are barbaric to say the least, a product of its day, but it is colorful, energetic, and hearty, with star power to burn. An enormous hit, it spawned a huge wave of Viking movies, some perhaps smarter but none as much fun.

Orson Welles provides the opening narration, setting the complicated relationships of royals, heirs, and nemesis on both the Viking and British sides, and James Donald and Alexander Knox costar.