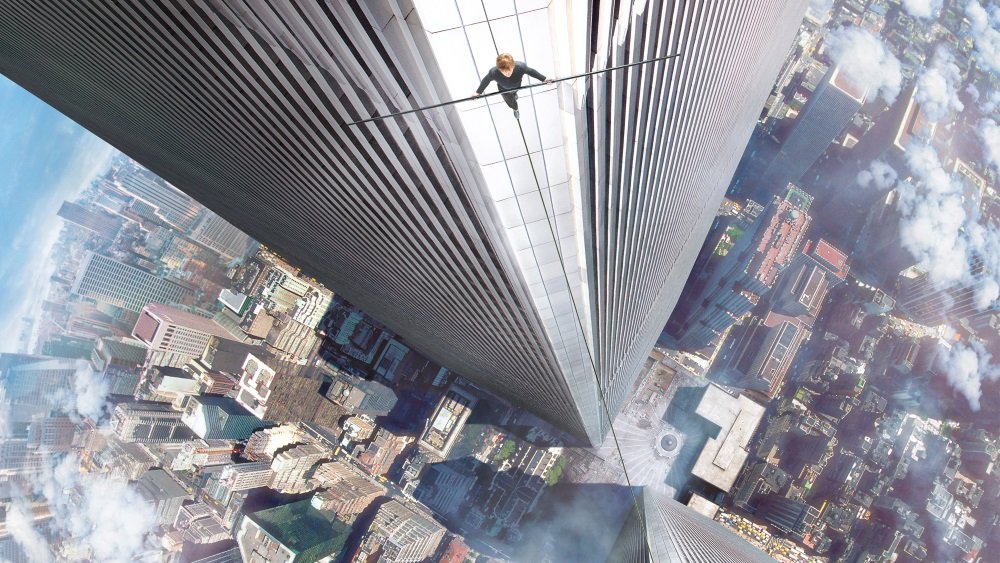 The Walk, starring Joseph Gordon-Levitt as Philippe Petit, the French aerialist who strung a tightwire between the Twin Towers and walked between the newly-constructed buildings in 1974, comes from Robert Zemeckis, a filmmaker who has pushed cinema technology to offer previously unseen sights and experiences. Here he uses digital effects to recreate not just the time and place but the sensation of walking hundreds of feet from the ground, balancing on an industrial cable in the swaying winds of a New York morning on August 7, 1974. This is not about tension or suspense or action cinema thrills, but a creative act imbued with a sense of awe and wonder.

It takes the film a while to get to that point, however. Gordon-Levitt plays Petit with a cute French accent just short of Monty Python parody (which, to be fair, is pretty accurate to the man as heard in the documentary Man on Wire, a 2008 film well worth the watch and available on Netflix – queue it up here) and narrates from the high up on the torch of the Statue of Liberty with NYC circa 1974 (another digital effect) in the background. He’s all overbearing whimsy as we watch him learn his craft—juggling, unicycling, and tightrope walking—in Paris, at times under the mentorship of Ben Kingsley (downright restrained here, especially compared to Gordon-Levitt), and put together his “accomplices” after he sees pictures of the Twin Towers under construction and hatches his master plan. Jumping to New York, the infiltration of the towers becomes a caper film in its own right, masterminded by a shaggy band of amateurs driven largely by Petit’s passion.

Zemeckis is in his element here and the film starts to pick up energy, and as the outcome is no doubt—it’s history, after all—Zemeckis eases us from the thrill of the caper mechanics into something more spiritual as he carries us into the clouds as Petit finally makes his walk early on the morning of August 7, 1974, as New Yorkers were shuffling off to work. The astonishment of the crowds stopping on the sidewalks to gawk is treated as a moment of true wonder. The moment is breathtaking, even if it’s not quite so astounding on the small screen as it is in the IMAX 3D presentation,. But then not many people actually caught the film in theaters so home video is where this film is destined to live.

On Cable on Demand and Video On Demand

Also available on Blu-ray, Blu-ray 3D, DVD, and Digital formats. The discs include a featurette and the Blu-ray editions add three additional featurettes and seven deleted scenes, plus bonus Ultraviolet Digital HD copies of the film.
The Walk [DVD]