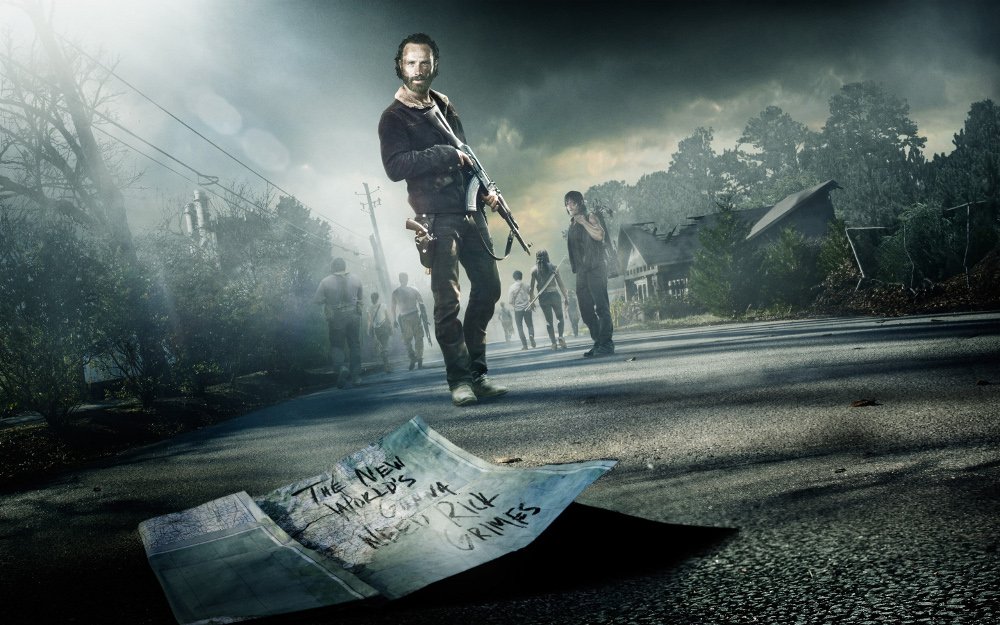 The Walking Dead, AMC’s gory, gruesome survival drama set in the aftermath of a zombie apocalypse, is currently the highest-rated show on commercial cable TV, beating the ratings of many successful network TV shows. It’s even spawned a prequel series: Fear the Walking the Dead.

The fifth season of The Walking Dead opens with an action-packed season premiere—Rick (Andrew Lincoln) and his people fighting to escape that cannibals that have turned the hope of the Terminus into a human meatmarket. It’s the most brutal episode of the show to date, but it’s also about loyalty, the drive to survive, and the commitment to remain human in an inhuman world. It sets up the rest of the season as Rick tries to reunite the group, which has been splintered (like previous seasons, episodes focus on the stories of different groupings of characters, some of whom die over the course of the season), and find a home for his people. When he does—they are invited (or perhaps more accurately recruited) to make a home in a genuinely benevolent walled community run as an idealistic commune—Rick, along with Daryl (Norman Reedus) and a newly badass Carol (Melissa McBride), view the possibility with guarded suspicion, no surprise given the failed promises they’ve survived over the seasons.

Like earlier seasons, the fourth season was split into two eight-episode segments and the second half revolves around the possibilities (and the resistance to) this potential new home filled with people who have never really faced the horrors of survival outside their paradise. Tovah Feldshuh guest stars as the community’s maternal leader and the final episodes are as much about her education on the realities of the threats both outside and inside the walls of her paradise as it is about Rick believing that this can be a real home for his survivalist family of followers.

I’m not one of the devoted fans of the series and like previous seasons it has a tendency to get bogged down in side stories between the dramatic high points, but at its best it can also offer touching short stories and character portraits in the quiet moments and still startle audiences with bloody battle scenes and inventive set pieces.

All 16 episodes of Season Five now on Netflix, a month before the sixth season debuts on AMC. Queue it up!

Pingback: What to watch the week of Friday, October 2 - Stream On Demand
Comments are closed.