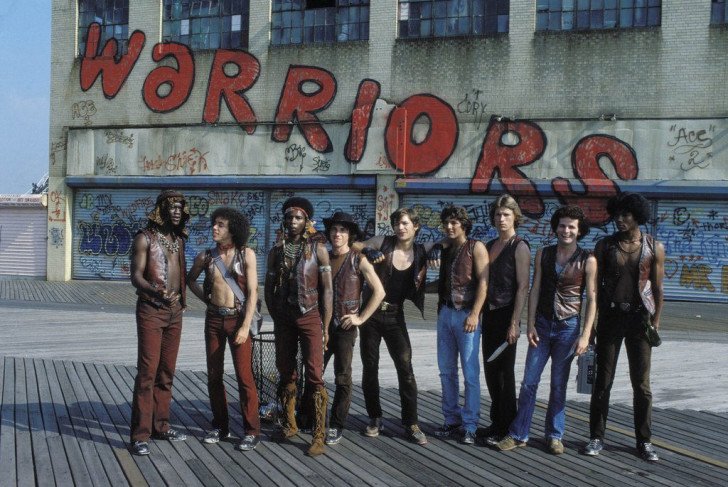 “Warriors! Come out and play-yay!”

Walter Hill’s comic book of an action film The Warriors (1979) plays like a prequel to Escape From New York, which turns the city into an after dark war zone where gangs rule the streets. Good guys and bad guys have no meaning in this urban frontier of warring gangs at a tenuous cease fire and the cops trying to shut them down.

The story is pure simplicity: the Warriors, gang from the outskirts behind enemy lines must get through the city after they’ve been falsely accuse of murdering a gangland leader. It’s based on a novel by Sol Yurick but it plays like a work of pure cinema, all action and momentum.

It’s a funky, flashy grindhouse epic that makes the most of its low budget graffiti aesthetic, practically abstract in terms of plot and motivation, but executed with the visceral pulp punch Hill mastered in his tough, terse pictures. It all plays out on the urban jungle reimagined as a kind of underground Oz dominated by flamboyant street gangs with costumes in place of colors.

Michael Beck is the leader of the gang left leaderless in the riot, James Remar the wild card ready to pick a fight at every turn, Deborah Van Valkenburgh the sassy gang chick who winds up adopted by the Warriors, and David Patrick Kelly is memorable as the psycho who thrives on the chaos he creates when he assassinates the charismatic Cyrus (Roger Hill), a kind of Martin Luther King of the street gang culture whose dream is to take control of the city. The enigmatic DJ is played by Lynn Thigpen, future educational TV icon as The Chief on Where in the World is Carmen Sandiego?

Years later, Hill returned to the film to create an “Ultimate Director’s Cut.” There is is no new footage per se, apart from a brief prologue of spoken narration the reframes the story in light of both Greek history (specifically the story of Xenophon and the march of the ten thousand to the sea) and comic book style. To reinforce the latter, he replaces the original transitions with comic book panel freeze frames and polishes up the original wipes.

“This will represent my intention when I was working on it… better than my original version,” he explains in his introduction. I can’t say I dislike the changes and they have a validity, but after all these years, I prefer the clean, tight, driving quality of the original film.

Also on Blu-ray and DVD and on SVOD through Amazon Video, iTunes, GooglePlay, Fandango, Vudu and/or other services. Availability may vary by service.
The Warriors: Ultimate Director’s Cut [Blu-ray]
The Warriors (Original Theatrical Cut) [DVD]