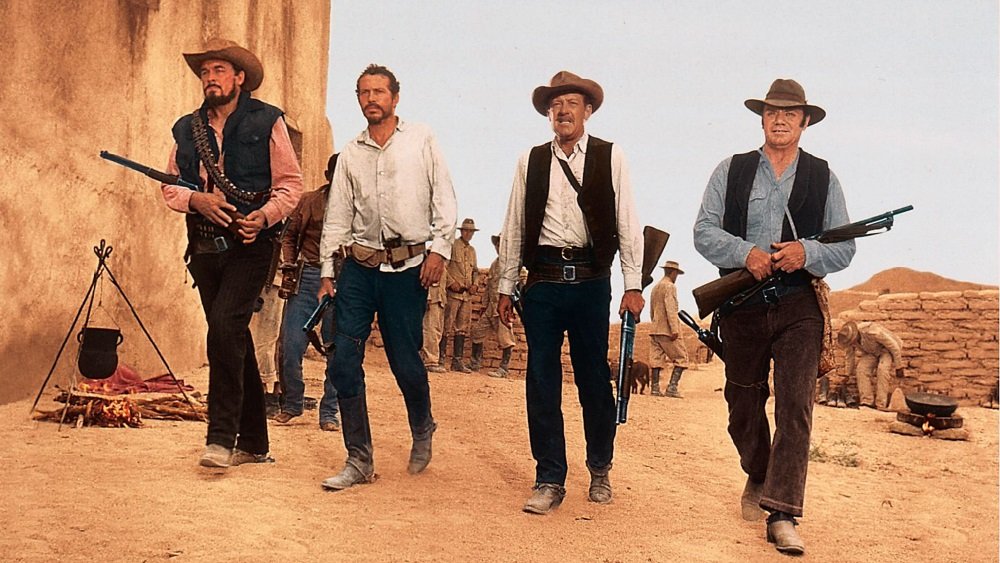 The film that branded Sam Peckinpah with the nickname “Bloody Sam,” The Wild Bunch (1969) blazed onto theater screens in the era of Bonnie and Clyde, when genre conventions were being blasted away and directors pushed the boundaries of what was once considered “acceptable.” Peckinpah, ever the irascible maverick, rode roughshod over every unspoken rule of on-screen violence in his portrait of mortality in the savage life of an outlaw.

William Holden is veteran outlaw Pike Bishop who, abetted by his loyal lieutenant Dutch (Ernest Borgnine), leads a ruthless gang of gunmen and killers made up of familiar veteran character actors (Warren Oates, Ben Johnson and Edmond O’Brien as the obligatory philosophical old coot) and new blood (courtesy of Jaime Sanchez and, briefly, Bo Hopkins as a decidedly psychotic young gun). Lying in wait for them is Pike’s former partner and one-time best friend, Deke Thornton (Robert Ryan), sprung from prison by corporate bankers to put a stop to Pike and his gang.

The film’s opening robbery-turned-ambush is a bloodbath the likes of which had not been seen before on American screens, a spurting blast of pulp and poetry choreographed into a ballet of violence. Deke doesn’t bother hiding his disgust with his scurvy, squabbling mercenaries (among them Peckinpah favorites Strother Martin and L.Q. Jones), who don’t care who gets hit in the crossfire as they compete for bounty. A lot of critics didn’t bother hiding their disgust, either, and the film was met with a storm of controversy.

But the film is also an elegiac epic set on the twilight of the frontier, a romantic spin on the myth of “honor among thieves” played as an apocalyptic saga of friendship and loyalty in a world where such notions have lost their currency. “When you side with a man,” says Pike, “you stick with him,” for better and for worse. In The Wild Bunch, both outcomes take place in a blaze of righteous, bloody glory.

It was nominated for Academy Awards for the screenplay by Peckinpah and Walon Green and for Jerry Fielding’s music.

, iTunes, Vudu, GooglePlay and/or other services. Availability may vary by service.
The Wild Bunch [Blu-ray]

Released on Blu-ray and DVD from Warner Bros. in a special edition featuring commentary by Peckinpah biographers/documentarians Nick Redman, Paul Seydor, Garner Simmons and David Weddle along with the previously released Oscar nominated documentary short The Wild Bunch: An Album in Montage (1996) directed by Paul Seydor, the original feature length documentary Sam Peckinpah’s West: Legacy of a Hollywood Renegade (narrated by Kris Kristofferson), and an excerpt from Nick Redman’s documentary A Simple Adventure Story: Sam Peckinpah, Mexico and the Wild Bunch, plus never-before-seen deleted scenes and outtakes and a Peckinpah trailer gallery.