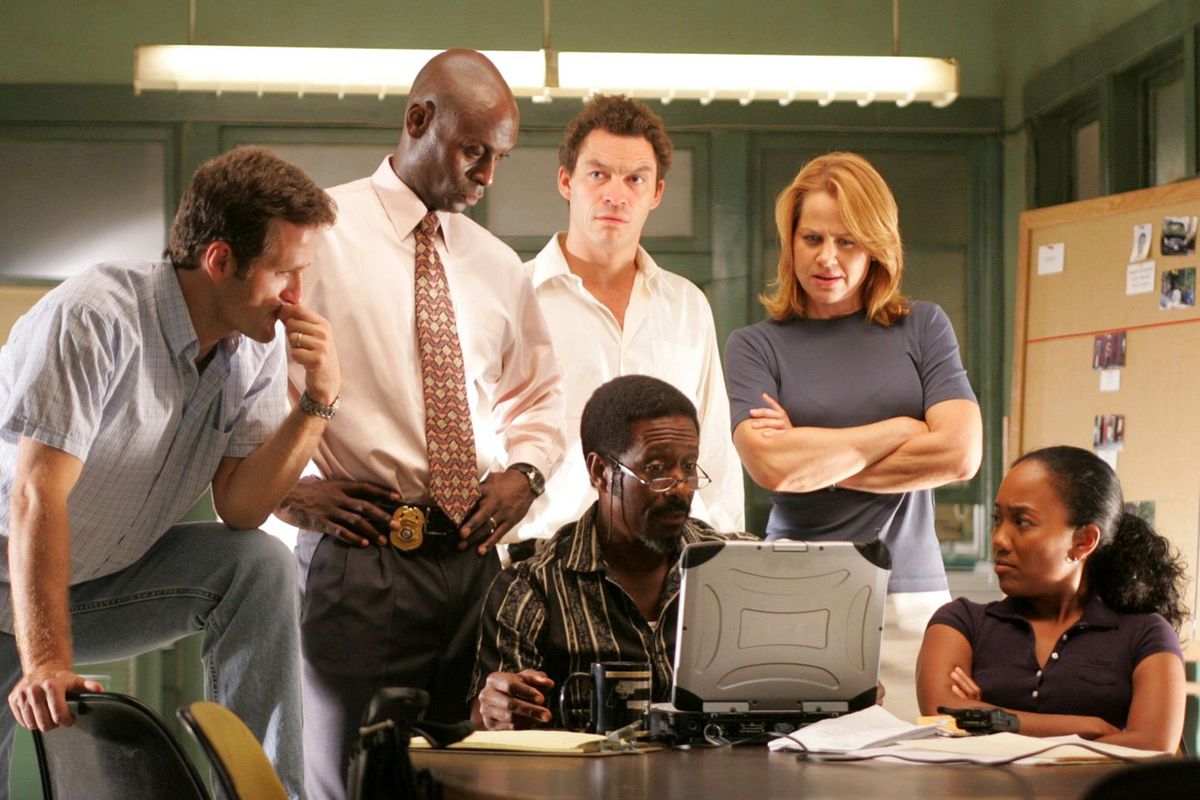 “Follow the drugs, and you’ll find dealers and users. Follow the money, and you have no idea where the case will take you.” So began the first season of HBO’s compelling tale of cops, crooks, and the social and bureaucratic forces that both divide and bind them, and the beginning of an epic series that set the high water mark for television drama. I’m not generally one for sweeping statements, but The Wire (2002-2008) is the best original show ever made for television.

Created by David Simon (co-creator of the landmark cop show Homicide: Life on the Street), it’s marked more by the mundane realities of procedure and politics (on both sides of the law), and the intricate details building cases and connecting the dots of evidence, than by drug busts and shoot-outs. The first season follows the single investigation of an inner-city drug dealer and the violence surrounding his ambitious expansion. Baltimore police detective McNulty (Dominick West), a hard-drinking divorced cop whose dedication is endangered by a big mouth that gets the better of him when he’s indignant, and D’Angelo Barksdale (Larry Gilliard Jr.), the sharp young nephew of West Side drug lord Avon Barksdale (Wood Harris). D’Angelo opens his eyes to the street politics when he’s demoted to slinging product from the towers in the slums and the show opens our eyes into both worlds. The deliberate pacing and attention of complex detail marked it off from every other crime show on TV, and Homicide star turned director Clark Johnson can take some of the credit for setting the tone and style in the first two episodes (he did similar honors on the pilot of The Shield).

The second season opens with hard-drinking loose cannon McNulty shuffled off to the harbor patrol (his punishment for bucking the chain of command) and the special squad commander Daniels (Lance Reddick) consigned to the police archive dungeon. Then McNulty fishes a corpse out of the water and starts a whole new investigation rolling. The team is back in business, and this time they leave the drug crimes of the street for human smuggling and corruption on the docks… and it’s all kicked off by a spat between a petty Irish cop and the local dock workers union. The drama brings us into the complexities of organized crime on the docks, the desperate tactics and petty scams run by an underemployed dock workers’ union in a faltering economy, and the victims sacrificed by international crime lords in the human cargo trade, but Simon and company continue to follow the drugs as well. Avon Barksdale’s drug operation is now being managed by Stringer Bell (Idris Elba). His big ambitions sets the foundation for the third season, which pulls the story the task force back into the affairs of Barksdale’s expanding drug operation. But what makes this season so compelling is the doomed, inspired, and utterly unthinkable solution to the drug problem that Simon proposes and then illustrates, with startling frankness, both the pros and cons of his modest proposal.

By the fourth season, as Simon and company boldly take on the broken education system, it’s clear that Simon’s ambitions are no less than a complex portrait of the American city (specifically Baltimore) with fictional stories illuminating the social and bureaucratic forces that make our cities work, or just as often, not work. Through the course of thirteen episodes that follow the lives of four friends in the eighth grade, Simon reveals the failure of the school system and the inability of the classroom structure to reach kids raised in a culture that is close to a war zone. These are kids on the killing streets of Baltimore’s drug-filled slums, where the behavior best suited to survival is the type that disrupts classrooms. It’s a devastating story with characters that are knots of complications and contradictions in a world where the internal politics of the system (any system) kills all innovation and stops progress dead in its tracks.

The Wire ended its run by casting a light on how and why the media covers the news. The newsroom of The Baltimore Sun becomes part of the narrative weave of the show, intertwining its challenges with the stories it’s supposed to be covering: crime, politics, the schools and the community as a whole. As with each previous season, the old stories are woven into the new: money earmarked for the police by the Mayor has been drained by the floundering school system, which had been starved and neglected and fallen in debt thanks to previous administrations. So wild card McNulty concocts a crack-brained scheme to pry money out of the city: he invents a big, headline-grabbing serial killer (a complete fiction) and Detective Lester Freaman (Clarke Peters), perhaps the most gifted and brilliant detective in the department, becomes his accomplice and retrofits the evidence to keep the fiction alive. He builds cases and pieces together evidence like a master puzzlemaker, and he and McNulty concoct a lie so big, with such far-reaching implications, that the city can’t risk the truth getting out. Certainly not the ambitious and irresponsible junior reporter (Tom McCarthy) who inadvertently contributes to the conspiracy by adding his own fictional details to the story, suspicious embellishments that glory-hungry editors are willing to let through without scrutiny. “We have to more with less,” proclaims its managing editor. “You don’t do more with less, you do less with less,” complains the newroom’s voice of reason and bearer of standards, City Editor Gus Haynes (Clark Johnson, of Simon’s Homicide), and so they do, but with splashier headlines.

Creator David Simon is especially critical of what he sees as the media’s dereliction of responsibility as the community’s watchdog and his insistence comes with a noticeable loss of nuance in that particular story, but the scope of the show remains just as ambitious and rich. The writing is the best on television (including scripts co-written by authors Richard Price, Dennis Lehane, and George P. Pelecanos), with a novelistic sweep and complexity unprecedented on the small screen and a brilliant symmetry as the show comes to a close. It doesn’t have the neat poetic drama of the “Dickensian” narrative (as the paper’s editors like to call it), merely the satisfying changing of the guard, with irony and poetic justice, rewards and punishments, guilty who go free and innocents who flounder. Yet for all the incompetence and corruption that keeps percolating to the top, there remain good cops, dedicated editors, honorable folks who take the places of those burned out by the system that resisted all efforts to change it.

The show ends with a system that perpetuates itself – a system reproduced in microcosm in everything from city politics to the school system to the drug hierarchy of the streets to the newspaper to, of course, the legal system – and people that continue to struggle against it even as others give in. To complete the symmetry, co-star Clark Johnson, who directed the show’s debut episodes, returns to direct the 90-minute series finale, which appropriately enough features a spirited wake.

Rated TV-MA for language, violence, drug use, and sexual content.

, iTunes, GooglePlay, Fandango, Vudu and/or other services. Availability may vary by service.
The Wire: The Complete Series [Blu-ray]

There are a lot of “Complete Series” collections out there, but this an essential, not simply because it invites repeat revisits but because of the show’s unity. Each season is like a novel in a self-contained cycle and together they make a complete whole. HBO collects all 60 episodes of the five seasons of the TV epic, along with all the commentary tracks and featurettes from the previous single-season releases, in a distinctive case with easy-to-access foldout slipsleeves for each season. The 23-disc set includes an exclusive disc with new supplements, but they are little more than flourishes: three character “prequels” (little scenes of Prop Joe and Omar and the first meeting of McNulty and Bunk, each running under two minutes) and a 13-minute reel of gags and clip montages. The original supplements from the previous releases are much more interesting and informative, especially the retrospective featurette “The Wire Odyssey” (a chronicle of the first four seasons) and “The Wire: The Last Word,” a reflection on the state of the media today featuring series creator David Simon.