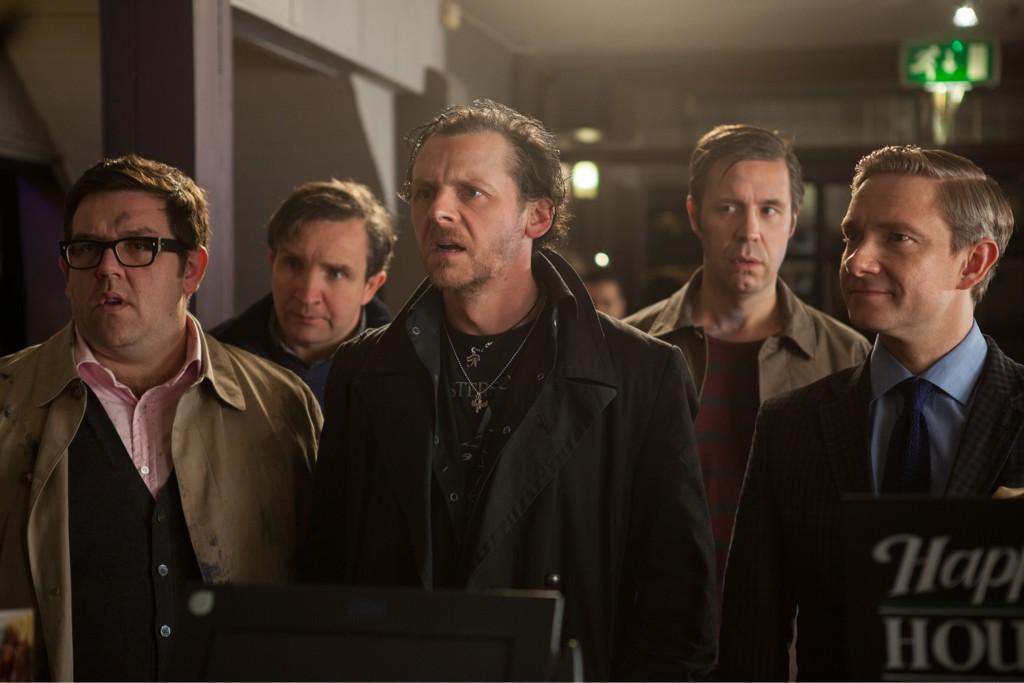 The World’s End (2013), the third film in the “Cornetto” trilogy created by friends and collaborators Edgar Wright (director and co-writer) and Simon Pegg (star and co-writer), is cheeky fun. Like the first two films, Shaun of the Dead and Hot Fuzz, it is an offbeat collision of genres, but this one leans heavier on the satire of Pegg’s disappointed loser than on genre satire.

Pegg plays the classic BMOC, the popular kid with a gang of followers who peaked in college and never went anywhere once school ended and real life began. Now he wants to simply relive his glory days with his old buddies (Nick Frost, Paddy Considine, Martin Freeman and Eddie Marsan), the former followers who have moved on with their lives and left Pegg behind.

The film lives up to its title, which ostensibly refers to the final drinking establishment in “the golden mile,” a succession of twelve pubs in their old college town. But not too long into their pub crawl the film shifts into something else, a mix of body-snatcher invasion movie and last stand against an insidious invasion (between pints, of course).

This is more ambitious than Wright and Pegg’s previous pairings, daring to go a little darker and take on the arrested adolescence and the frustrations of adult accommodation, and it’s far smarter than most of what passes for comedy in theaters today. I still prefer their first two films, with their manic energy and wicked satire, but there’s something surprisingly grounding in this film’s defiant cry of individualism in the face of conformity.

The Blu-ray and DVD feature commentary by Edgar Wright and Simon Pegg and the 48-minute “Completing the Golden Mile: The Making of The World’s End.” The Blu-ray features many more exclusive supplements: two additional commentary tracks (technical commentary by Wright and director of photography Bill Pope and cast commentary by stars Simon Pegg, Nick Frost, and Paddy Considine), a half-hour featurette on the stunts and special effects, U-Control options to see the film with picture-in-picture storyboard track or with a trivia track, all sorts of mini-featurettes and behind-the-scenes footage, and a whole lot more. Plus a bonus DVD and Ultraviolet Digital copy.