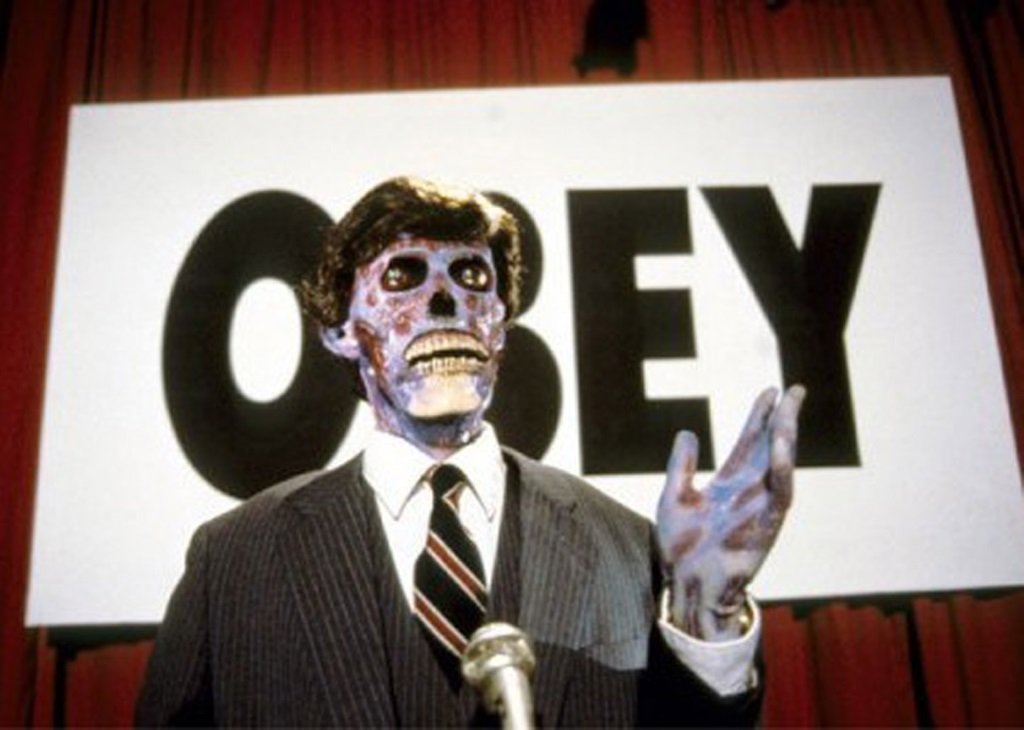 A year after Oliver Stone elevated the phrase “Greed is good” to a satirical double-edged mantra in Wall Street, John Carpenter put it more bluntly in They Live (1988), a scruffy little genre movie with a subversive subtext. “Why do we worship greed?” asks an pirate broadcaster in the opening scenes, as images of homeless people fill depressed urban slums and crowd around TVs to see how the rest of the country lives. This backdrop of inequities and economic hardship is a vivid backdrop to what might otherwise be a simple B-movie about an alien invasion hiding in plain sight, indistinguishable from the humans beside them but for one thing: they are the 1%.

Roddy Piper’s working class hero John Nada, a man with no politics and a deep-seeded belief in the tenets of hard work and essential fairness, he has no interest in the rabble-rousing conspiracy of pirate broadcasts that break into TV reruns. At least not until he dons a pair of super-secret x-ray specs, hidden in a bunker of an underground resistance group, and suddenly see a very different world through these glasses of truth: billboards and consumer products carry subliminal messages and the rich are actually ghastly skeletal creatures from another planet.

Professional wrestler Piper is a brawny, broad presence, not much of an actor but spirited and likable, and Keith David is marvelous as his reluctant partner in rebellion, providing a moral grounding to Piper’s B-movie activism when the lie is revealed. Earth has become a third world colony for interstellar “free enterprisers” who preach the gospel of unregulated capitalism and the promise of advancement through hard work and perseverance while insidiously sabotaging all human efforts to get ahead. Their main tool for control: subliminal messages, media control, and consumerist greed. It’s not class warfare, it’s an economic invasion, and Nada becomes a one-man resistance army as two-fisted activist.

And two-fisted is the operative term here, as confirmed in the entertainingly interminable knock-down, drag-out alley brawl between Piper and Keith David. This is a classic example of genre filmmaking with a political punch, albeit in broad, sloganeering terms. “I’m here to kick ass and chew bubblegum, and I’m fresh out of bubblegum,” shouts Nada in blue-collar guerilla mode when he steps into a bank and starts blasting the skull-faced aliens. It’s a ridiculous line and, weirdly, has become something of a pop culture slogan among a certain breed of genre geek.

Carpenter is clearly having fun with the film, making up for budgetary challenges with almost cartoonish action scenes and set pieces. But he’s also using the freedom of a low-budget genre film to make a political statement that he doesn’t even bother to hide: the promises of the American Dream are a sham. When he made the film, he saw a culture of financial piracy on grand scale and a country where the rich were getting richer, the middle class was disappearing, and the economic game was rigged by those with money and power. It was timely in 1988 and, in the wake of the 2008 financial crash, looks even more prescient now. He simply framed his observations in the conventions of science fiction.

You can probably peg Carpenter as a bleeding-heart liberal, at least at this point in his career, but as a popular filmmaker he never gave short-shrift to the “bleeding” part of that description. They Live may Carpenter’s most overt political statement, but it’s also a lively, eccentric, action-packed piece of pulp filmmaking.

, iTunes, GooglePlay and/or other services. Availability may vary by service.
They Live (Collector’s Edition) [Blu-ray]

Shout! Factory’s Blu-ray+DVD Combo Pack features a vintage commentary track by John Carpenter and actor Roddy Piper (recorded a decade ago for a foreign DVD release), a new video interview with Carpenter and actors Keith David and Meg Foster, the original 11-minute featurette “Stop, Look, Listen: The Sights and Sounds of They Live” with new interviews with director of photography Guy Kibbee, stunt coordinator Jeff Imada, and musical collaborator Alan Howarth, and a 2012 cast reunion at a screening at Texas Frightmare Weekend. The archival goodies include the original EPK (electronic press kit) “The Making of They Live” and bonus EPK footage, a still gallery, TV spots and trailers.