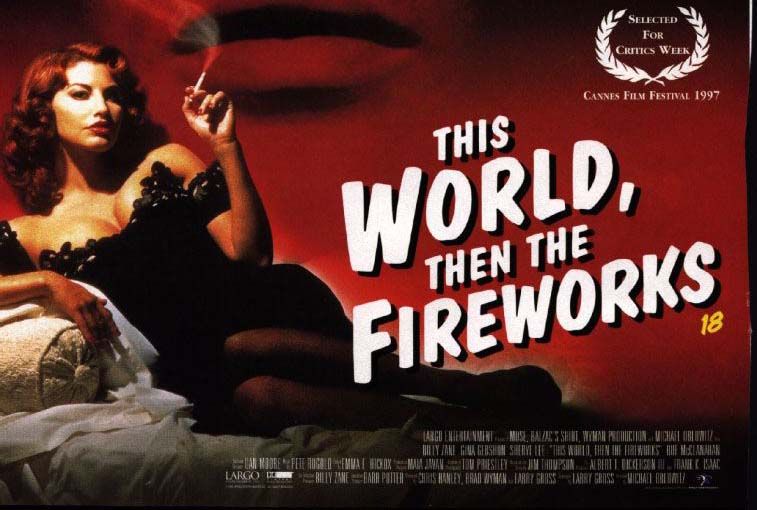 The disturbed world of pulp crime novelist Jim Thompson’s deformed psyches and demented morality comes to life in This World, Then the Fireworks (1997), one of the more unpredictable works in a career defined by the author’s disturbingly treacherous tales. What makes this dreamy adaptation by director Michael Oblowitz and screenwriter Larry Gross work is the way they peg the mood: a musky, low-key mixture of film noir and simmering Southern Gothic.

Billy Zane, with his disarmingly lazy grim and bedroom eyes, is a Chicago newspaperman with a sideline as a con artist who leaves the Windy city on shaky terms for California, where his hooker twin sister (Gina Gershon, her bow-tie lips almost perpetually parted with a suggestive smirk) plies her trade in the bars of their port-town home. Together, they concoct a scam to cheat his latest mark (Sheryl Lee) out of her pricey property.

It’s a bizarre relationship, tender and respectful with a suggestively incestuous undercurrent that pulls at the story, like a schizophrenic, drug addled take on Tennessee Williams. This connection goes way beyond sibling affection. 1950s period flavor and a smoky jazz score set this twisted character piece in the familiar world of film noir pastiche while the lazy pace make the crazy narrative twists all the more casually outré, like a languid, opium-induced nightmare. Rue McClanahan and Seymour Cassel co-star.