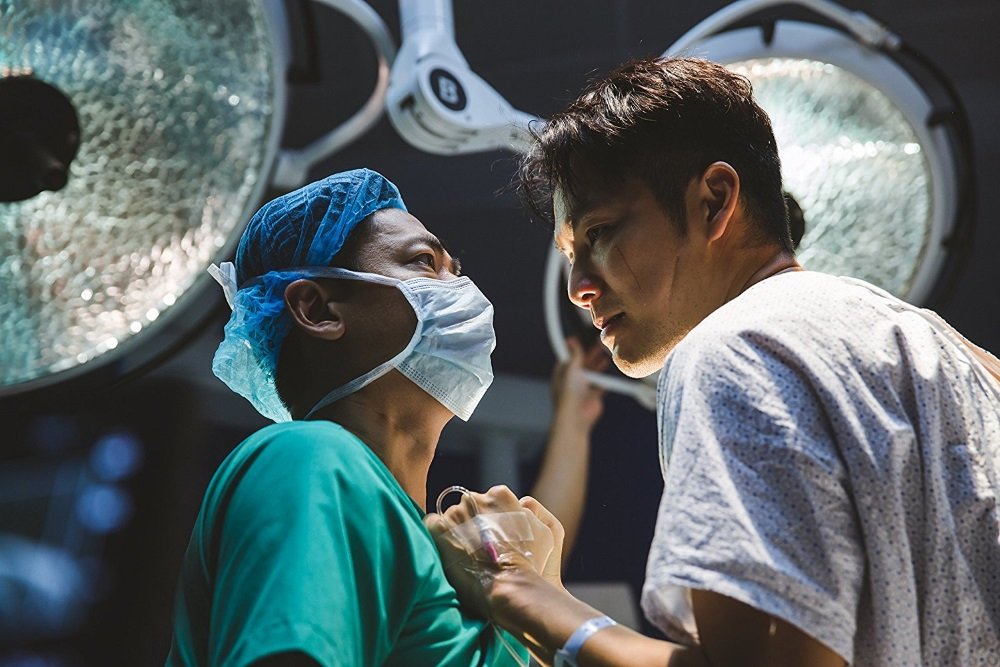 Three (Hong Kong, 2016) – Johnnie To is one of the top directors of action thrillers and crime drama in the world and if Three is not one of the director’s most dramatic, it is entertaining, consistently engaging, and executed with an impressive precision that turns good ideas into ingenious set pieces.

Set almost entirely in a hospital surgical ward, it stars Louis Koo as Inspector Chan, a driven cop who accompanies his injured prisoner, the cagey and manipulative gangster Shun (Wallace Chung), to the special ward of the hospital when the criminal survives a bullet to the brain. Vicki Zhao is the intense surgeon Dr. Tong, torn up with guilt over a surgical mistake, who clashes with the frustrated cop. Chan could lose more than his job if Shun lives to tell his superiors about the failed assassination attempt. They are aggressive and defensive and the philosophy-spouting crook Shun plays mind games with both of them and while he waits for his gang to rescue him. There is method to his madness.

You can see the challenges that intrigued him about this project: not just the enclosed space of the hospital ward, but the meticulous cross-cutting to the gang members in a brutal and explosive escape thriller in a hospital filled with undercover cops and crooks in disguise. It’s exceedingly clever, with an intriguing exploration of “good” guys (a police detective and a brain surgeon) whose passions push them to make some bad choices that ultimately falls short of really engaging with the consequences, but it has the hallmarks of To’s great films. He fills the enclosed space of the ward with characters and stories that play out in the margins and cross paths in the intricate dramatic choreography that builds to an explosive climax and an astounding close-quarters shoot-out that throws dozens of characters into the beautifully designed slow-motion chaos in an impressive long take. It’s accomplished with plenty of CGI and stunt work that doesn’t always look realistic but does always look incredible. The clash of compromised heroes and a cocky, cool-headed criminal mastermind, is clever without being dramatically resonant and more engineered than written. But the direction is a master class in action movie filmmaking. And the ever reliable Lam Suet, who gets the greatest range of character parts in To’s films, gets to play the sloppy, not-too-bright member of an otherwise crack squad and plays the climactic scene with a knife sticking out of his ass. That alone is worth the film.

Not rated, in Cantonese with optional English subtitles.

, iTunes, GooglePlay and/or other services. Availability may vary by service.
Three [Blu-ray]

The Blu-ray and DVD from Well Go with a sharp-looking disc with two brief promotional featurettes and the trailer.