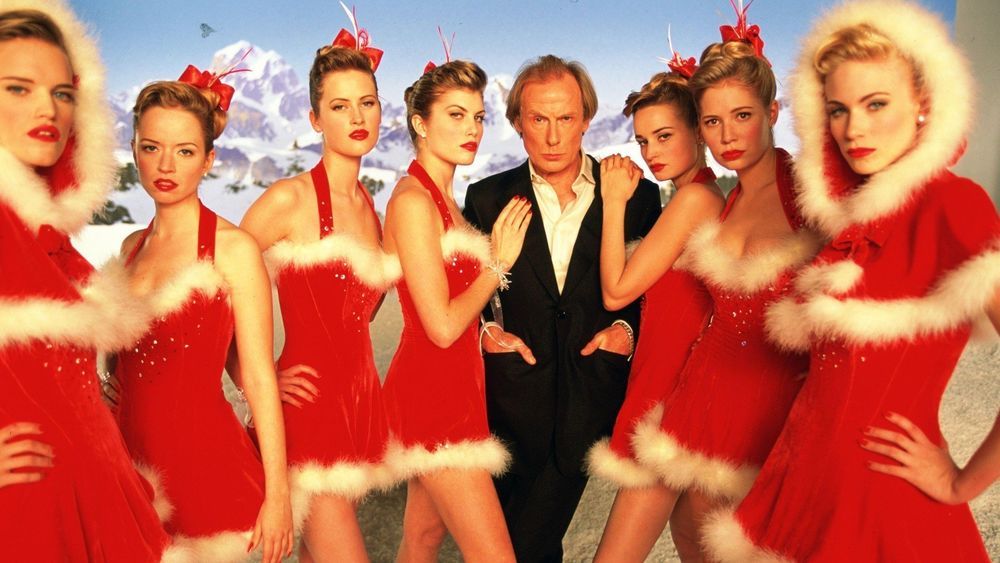 Richard Curtis, Britain’s one-man romantic comedy factory and screenwriter of such hits as Four Weddings and a Funeral and Notting Hill, made his directorial debut with this star-studded comedy about love… actually. The film skips through what seems like dozens of stories over the course of the Christmas holidays, following the romantic travails of everyone from the British Prime Minister (a charming and sweet Hugh Grant) to a love-struck grade school kid. In between we get an old married couple (Emma Thompson and Alan Rickman) suffering the marriage blahs, a novelist (Colin Firth) who flees a cheating girlfriend and falls for a Portuguese housemaid, and a luckless British slob who flies to the American midwest to find something that England lacks: girls who think he’s cute. But the film is all but stolen by Bill Nighy as a washed up rock star goofing his way through his holiday TV and radio appearances as his seasonal song climbs the charts. It’s a light holiday treat of romantic hors d’oeuvres. Laura Linney, Liam Neeson, Martine McCutcheon, Keira Knightly, and Rowan Atkinson co-star.

For the kids: The Nightmare Before Christmas (1993)

The playfully macabre humor of Tim Burton is deftly brought to life through the old-school magic of stop-motion animation by director Henry Selick. Jack Skellington, the Pumpkin King of Halloween Town, is a childlike ghoul who stumbles upon the joy of Christmas Town and decides to fill Santa’s shoes with his own twisted (but endearingly well-meaning) take on gift giving. Selick turns Burton’s original story and fanciful sketches into fully realized characters and walks that fine line between comedy and horror while maintaining the sense of wonder instilled by the pumpkin-headed Halloween king. The mischievous little helpers of Santa Skellington aren’t evil, they just have an innocently devilish sense of fun. Danny Elfman pens the ten original songs and provides Jack’s singing voice.

Billy Bob Thornton is perfectly cast as Wilie T. Stokes, a foul-mouthed, sex-crazed, child-hating, hard-drinking safecracker. With his partner in crime (Tony Cox), a midget who plays Santa’s Little Helper while masterminding the holiday heist, he plays the rattiest, most misanthropic department store Santa in creation. Under the drinking, swearing, and utter contempt for himself and everyone around him, however, is an dying ember of hope that, against all odds, is fanned to life when he becomes the most unlikely father figure to a sad-sack only child (Brett Kelly) raised by a senile grandmother (Cloris Leachman). Terry Zwigoff’s anti-holiday film, produced by the Coen Brothers (who also hatched the story idea, according to the accompanying featurette), has it both ways, with the offhandedly contemptuous, ill-mannered, and unpleasant Thornton sliding toward redemption despite his best efforts and worst instincts. Lauren Graham is both naughty and nice as an easy bartender with a Santa fetish.