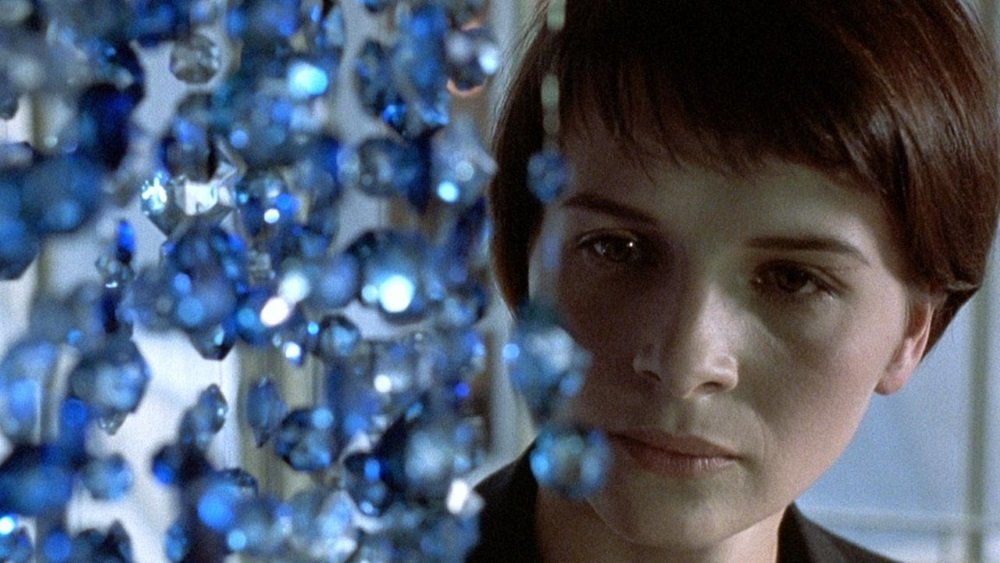 The three colors are blue, white and red. They are the colors of the French flag, of course, and they are appropriated by director Krzysztof Kieslowski along with the themes of the motto they more or less represent: liberty, equality, fraternity. But the films Three Colors: Blue (1993), Three Colors: White (1993), and Three Colors: Red (1994) are not hymns to patriotism or national identity and the Polish Kieslowski hasn’t any predisposition to making a statement at France. It’s better to think of this trilogy in similar terms as his The Decalogue, ten short films in which he reflects upon the Ten Commandments in terms more suggestive than literal. They are about morality in terms of life in Poland in 1989 and it is that vast collage of life experience in that time and place that is so powerful.

After Kieslowski completed The Decalogue, the Berlin Wall fell, Perestroika was introduced in the Soviet Union and communism collapsed in Eastern Europe. The Three Colors trilogy may begin in France but reaches beyond national borders to Poland and Switzerland to become in part a portrait of the new Europe. And, I would say, a rumination on the mysteries behind the faces of his beautiful leading ladies: Juliette Binoche, Julie Delpy and Irene Jacob.

Binoche stars in Blue as Julie Vignon, the sole survivor of a car wreck that kills her husband, a revered composer, and their young daughter. Initially bereft to the point of suicide, she’s unable to swallow the pills. It’s more a matter of gag reflex than second thoughts but she embraces the reflex as a way to deal with her grief: she simply rejects all emotional connection to her past and her present life, dropping out of contact with everyone she knew and systematically destroying all extant traces of her husband’s unfinished composition, which we learn she was intimately and creatively involved with. (The title of the composition, “Concerto for the Unification of Europe,” suggests the scope of Kieslowski’s trilogy while commenting on Julie’s aggressive isolation.)

As one might assume from the title, the color blue dominates the palette, from the light over the city at dusk to the glow from the swimming pool she visits to, quite literally, exorcize/exercise the demons of her memory. The saturated hues are calming, protective, but also isolating; the rest of the world fades away when she’s enveloped in the blue of the water. Yet the world keeps coming back to her and Kieslowski punctuates every assault on the emotional armor with startling orchestral stings and a brief fade to black, as if the scene has jolted her out of the present and into the blackness of loss she has refused to confront. The technique recalls Godard but Kieslowski orchestrates the elements with a grace that is his alone. Where Godard deconstructs and breaks our engagement with the film, Kieslowski pulls us in and layers the effects: the music she has been trying to destroy returns with a vengeance, as if fighting her efforts to suppress it. Ultimately it becomes the story of her reawakening to world, but this time on her terms.

White opens in Paris on a sad clown of a gentle Polish immigrant, Karol Karol (Zbigniew Zamachowski), reporting to divorce court where his French wife (Julie Delpy) sues for divorce because he has failed to consummate the marriage (not for lack of desire, merely a bad, extended case of impotence). With his twinkling blue eyes and smile of a child, Zamachowski carries himself with the bounce and determined optimism of a silent movie clown in a mercenary modern world, where he’s reduced to a penniless, homeless, hapless drifter between countries until a generous countryman helps smuggle him back home. When Karol finally sets foot back on Polish soil, after escaping from thieves and tumbling down the side of a garbage dump, he gazes across the garbage-strewn landscape with the sigh: “Home at last.” There’s no love of Poland in this portrait, where the new capitalism has only made it into a country of opportunists. . “These days you can buy anything,” Karol muses as he remakes himself, first as a bodyguard to a black marketer and then as a cunning businessman in the new Poland. First he buys a gun and then he buys an elaborate revenge against the wife who so cruelly kicked him to the curb (and she is cruel, mind you, driven by some fury that remains unexplained and almost unfathomable).

Yet this is the comedy of the trilogy, not so much a black comedy as a wicked satire in the cold white light of Polish winter, which (as you would expect) informs the color palette of this film. It’s visually starker than the other, more saturated films, bereft of bright color, but while Kieslowski shows us a cold world of commerce and power, he also offers us a friendship of great devotion and, in a vodka-fueled lark across a frozen park, the only moments of pure, childlike joy in the entire trilogy. And against all expectations, Kieslowski presents a final act of revenge that is at once unforgiving and steeped in love. If White is indeed about equality, then this vengeance is about balancing the scales and rekindling a broken relationship by the most drastic measures. That the final image is suffused in emotional reunion (at the expense of physical disconnection), forgiveness and pure, unconditional love is testament to the artistry and humanism of Kieslowski.

All three films open on industrial rumble and physical mechanisms of modern life: the speeding tire of an automobile in the highway in Blue that will, moments later, shatter Julie’s life, and the conveyor belt of an airport luggage belt carrying a suitcase that, we will soon learn, carries strange cargo in White. Red begins by hurtling along telephone lines and international cables, under the English Channel and through subterranean tunnels, only to end on a busy signal on other end of the line. More than a motif, this introduction frames and defines Red, a film that revolves around relationships strained by physical dislocation and relationships that become almost abstracted through increasingly disconnected telephone conversations.

Irene Jacob stars as Valentine, a student and professional model in Geneva, Switzerland, whose boyfriend is constantly traveling (and usually suspicious and unpleasantly jealous whenever he calls) and Jean-Louis Trintignant is Joseph Kern, a bitter retired judge who spends his days eavesdropping on his neighbors’ phone calls. After spending a life in the impossible pursuit of finding truth within the constraints of the courtroom, he now investigates his neighbors for no reason other than to learn the “truth,” as if to prove that such a thing exists. Or maybe it’s merely a test of justice. It’s like he’s waiting for someone to catch him and report him, and the longer he remains at large to continue, the more disillusioned be becomes. Their initial meeting is initiated by injury (Valentine accidentally hits his dog in the road) and fraught with conflict and judgment, yet they somehow become friends and confidantes. He imparts a little wisdom to her, and she rouses his dashed ideals, while the intensity of the rich red color scheme brings a vibrancy to the scenes: it’s the color of love, anger, passion, heat, and it warms this into becoming the most forgiving film in the series.

“I have said all I need to say on film,” remarked Kieslowski after completing the trilogy. “Red is my summation.” It is certainly the most densely and deftly woven of the three films. The story of a young judge (Jean-Pierre Lorit) who lives in Valentine’s neighborhood and dates a neighbor of the old judge plays out in the margins of the film: their paths circle and wind around without meeting throughout the film, his romantic drama echoes Valentine’s and his life’s journey recalls that related to Valentine by Joseph. The old judge increasingly becomes Kieslowski’s stand-in. He observes and judges, but also defends and excuses, all the while constantly questioning his actions and his ability to find the truth. And while he never aggressively interferes in the lives he listens in on, he is something of a conductor, nudging events along with a remark or a suggestion.

There are few direct narrative connections between the three films. Apart from the coda of Red, which brings all three films together into the same climactic event, they limited are brief crossings (Binoche stumbles into the courtroom of White in a tiny moment that pulls the two films into the same universe) and references that echo across the films. But ideas and images and the texture of Kieslowski’s filmmaking and elliptical storytelling reverberate through the trilogy, the most prominent being an old stooped person who shuffles up to a recycling bin and reaches up to deposit a bottle. Only in Red does our heroine step in to help, and that act of kindness is like a fulfillment, a test of human compassion finally met that brings the cycle to its fruition.

Red was nominated for three Academy Awards, including best director, and all three films won awards at film festivals and from critics groups around the world.

No rated, in French and Polish with English subtitles.

The Criterion Channel presents interviews, video essays, and other featurettes and archival extras for each film from the deluxe Criterion box set (the disc supplements are explored below).

Criterion presents the trilogy in a box set with a wealth of supplements, including select scene commentary by Juliette Binoche, video interviews with producer Martin Karmitz and editor Jacque Witta and three “Krzysztof Kieslowski’s Cinema Lesson” programs, excerpts from a 1994 French TV program featuring Kieslowski describing, dissecting, and ruminating on a scene from each of the three films. The “Reflections on Blue” and “A Discussion on Kieslowski: The Early Years” are interview programs with film critics Geoff Andrew and Annette Insdorf, actresses Juliette Binoche and Irene Jacob, filmmaker Agnieszka Holland, cinematographer Sławomir Idziak and editor Jacques Witta, and there are short documentaries on the making of White and Red and the world premiere of Red at Cannes 1994.

Archival offerings include the 1995 feature-length documentary Krzysztof Kieslowski: I’m So-So from Krzysztof Wierzbicki, two early Kieslowski student shorts, The Tram and The Face (both from 1966), and two short documentaries by Kieslowski, Seven Women of Different Ages (1978) and Talking Heads (1980). And of course there is a substantial booklet with essays on the films by critics Colin MacCabe, Nick James, Stuart Klawans, and Georgina Evans, an excerpt from the interview book “Kieślowski on Kieślowski,” and reprinted interviews with cinematographers Sławomir Idziak, Edward Klosinski, and Piotr Sobocinski.