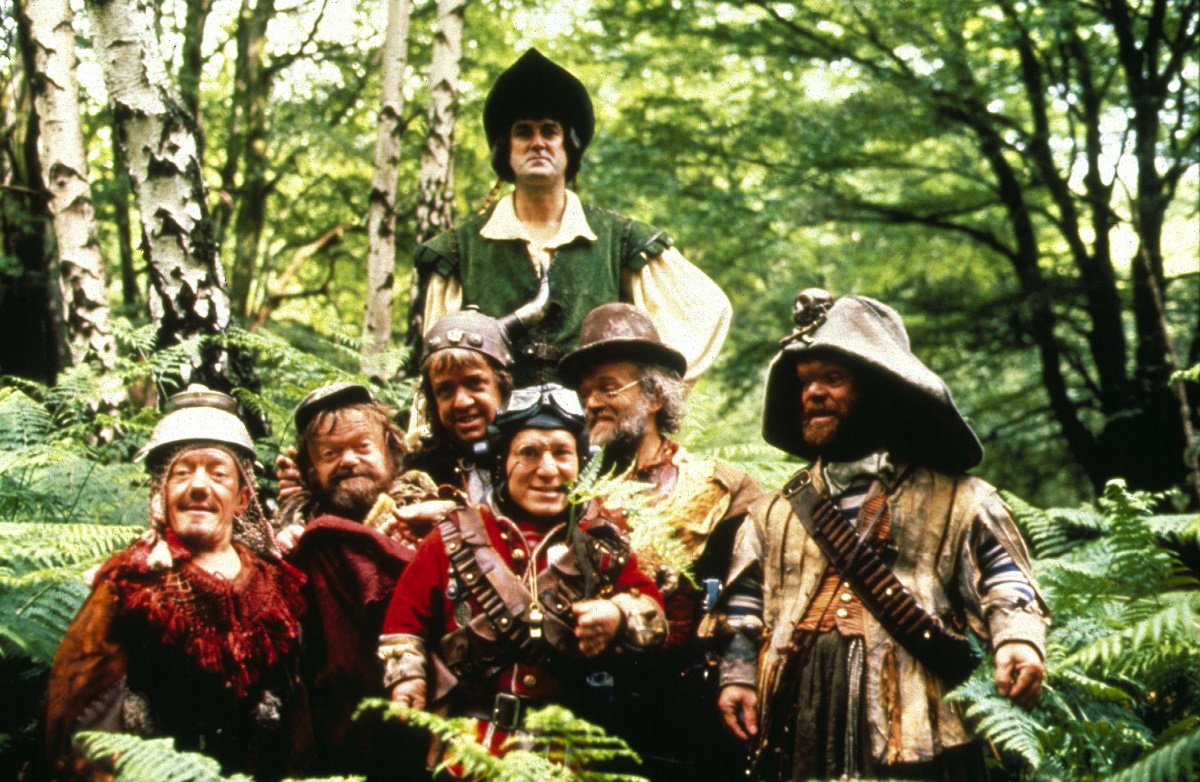 Time Bandits (1981) is a fractured fairy tale from the cracked imagination of Terry Gilliam, who wrote the warped adventure with fellow Monty Python alum Michael Palin. It’s a strange and weird and wonderful mix of boy’s own adventure, Python-esque humor, and grim irony, all wrapped in tall tales, ancient myths, and historical figures.

British schoolboy Kevin (Craig Warnock) is pulled through a series of holes in time and space by a raucous band of renegade dwarfs (among them David Rappaport, Kenny Baker, and Jack Purvis) attempting to plunder their way through history. They’re no criminal masterminds, mind you, and the incredulous Kevin becomes a voice of reason and even something of an anchor when the gang gets tangled up in silly spats and Three Stooges-like shenanigans. And he gets the ride of his life as he meets Napoleon (Ian Holm, who is delighted by “little things hitting each other”), Robin Hood (John Cleese), and Agamemnon (Sean Connery) along the way.

This was Gilliam’s sophomore picture and he makes a significant leap from his debut solo effort Jabberwocky as both a storyteller and a cinematic artist. He lets us see it all through Kevin’s eyes, from a roaring horse that breaks out of his bedroom closet like a dragon from a storybook to the comforting entrance of Sean Connery as the heroic Agamemnon adopting Kevin like he’s an orphaned prince. But the whimsy and idealized heroics are leavened with satirical jabs—Robin Hood’s men are not so merry and their benevolence comes at an unexpected price—and the whole adventure turns out to be monitored by the scheming personification of Evil (David Warner).

The colorful set pieces, imaginative design, and physical humor seems aimed at kids, while the dark satire presages Brazil, making it as much an adult film as a children’s fantasy. It’s hard to tell if the grim coda is Gilliam’s idea of a tragedy or a happy ending, but it does tap into a primal urge of adolescent rebellion: a child’s revenge fantasy made real. It’s also hilarious and imaginative and completely unruly, emphasis on that last note. Chaos reigns, evil exists, and the best we can do is keep our eyes open and hold our own.

Ralph Richardson plays Supreme Being, Michael Palin and Shelley Duvall are the eternal lovers, and Katherine Helmond and Peter Vaughn costar. Also note that George Harrison was an executive producer and contributed an original song to the film.

The Criterion Collection editions on Blu-ray and DVD features commentary by director Terry Gilliam, co-screenwriter and actor Michael Palin, and actors John Cleese, David Warner, and Craig Warnock (recorded in 1997 for the original laserdisc release), the featurette “Creating the Worlds of Time Bandits,” archival interviews, and a booklet.