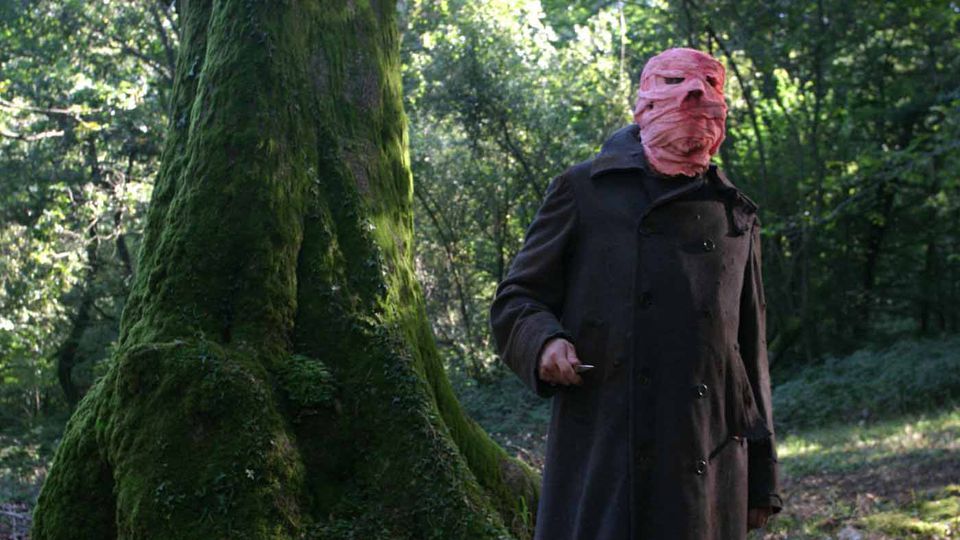 In Nacho Vigalondo’s Spanish time-travel drama Timecrimes (Spain, 2007), Hector (Karra Elejalde), a middle-class man in a new country home, strays from his wife to search the nearby woods for a naked girl, and ends up chased by a scissors-wielding madman right into the amniotic pool of a time machine. He steps out earlier that day and proceeds to play an increasingly self-destructive game of hide-and-seek with his other self. And then other selves.

Vigaldo plays out his austere and often absurd little time travel thriller through the subjective perspective of Hector himself as he catches up with past selves in his increasingly self-contained chronosphere. The absurdity, curiously enough, has little to do with the warped time travel logic. The plotting is deviously clever and smartly executed and the pattern unfolds like a puzzle of interlocking pieces being methodically snapped together. You just have to accept utterly irrational behavior from our time-looped protagonist to make it work.

The three other characters in this chamber piece of a mindgame are nominally normal in an abnormal situation. You might assume that temporal travel has wreaked havoc with Hector’s mind, but his irrational behavior and wildly impulsive actions begin before he ever wades into the experimental pod. It just gets worse when he starts looping back on himself, leaving all sorts of unanswered questions hanging over the his perverse solution to time travel conundrums.

There’s a dark and demented little psychodrama of self-inflicted madness beneath the narrative contrivances. Is it real, or the skewed perspective of a schizophrenic mind creating its own internal reality? What’s with the ratty, horror-movie head bandage? And if you keep deliberately assaulting alternative versions of yourself, does that count as self-mutilation?

Vigaldo’s direction makes it work more like a waking nightmare than a genuine experience and he gives it the quality of madness.

Rated R, in Spanish with subtitles.