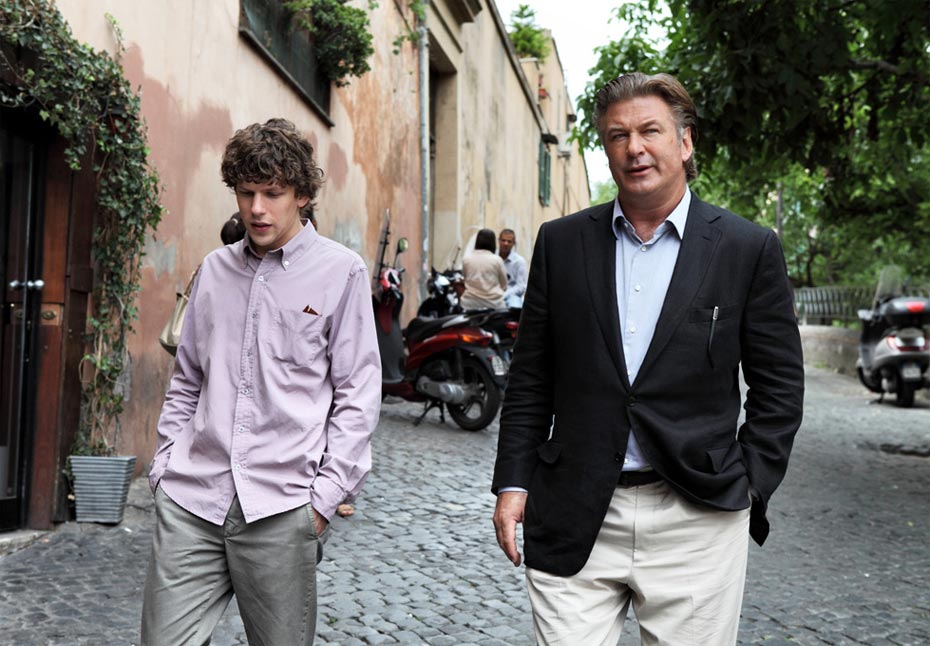 To Rome with Love (2012) takes Woody Allen’s continental road show to Italy for a quartet of stories – really, more like extended skits – with an international cast.

Jesse Eisenberg ignores advice from his older self (Alec Baldwin) when his relationship with Greta Gerwig is complicated by the emotionally ping-ponging Ellen Page in the most substantial of the tales. It’s from the wry, mature Allen, but apart from a framing sequence of young love blossoming threaded through the film, the rest of the tales in this anthology are more farcical. Take Woody Allen and Judy Davis as an old married couple come to meet the Italian parents of their daughter’s fiancé and discovering the father is a natural at grand opera, but only when he’s in the shower. You can imagine how Allen stages his big stage debut, and the gag is stretched into all sorts of permutations on his tour.

The Italian-language bits feature Roberto Benigni as an everyman suddenly and inexplicably elevated to media celebrity and madcap comedy of newlyweds (David Pasquesi and Alessandra Mastronardi) separated in the big city with Penelope Cruz as a hooker who hitches herself to the lost groom.

Allen seems to have been refreshed with his sojourn in Europe, and even in something as inconsequential as this has energy and invention. And it doesn’t hurt to have the beauty of the Rome as the gorgeous backdrop to his comic romances and dizzy farce. Like Midnight in Paris and Vicky Christina Barcelona before it, To Rome with Love is a lovely portrait of the city.

, iTunes, GooglePlay and/or other services. Availability may vary by service.
To Rome With Love [Blu-ray]

To Rome With Love [DVD]

The Blu-ray and DVD releases include the generic promotional featurette “Con Amore: A Passion for Rome.”