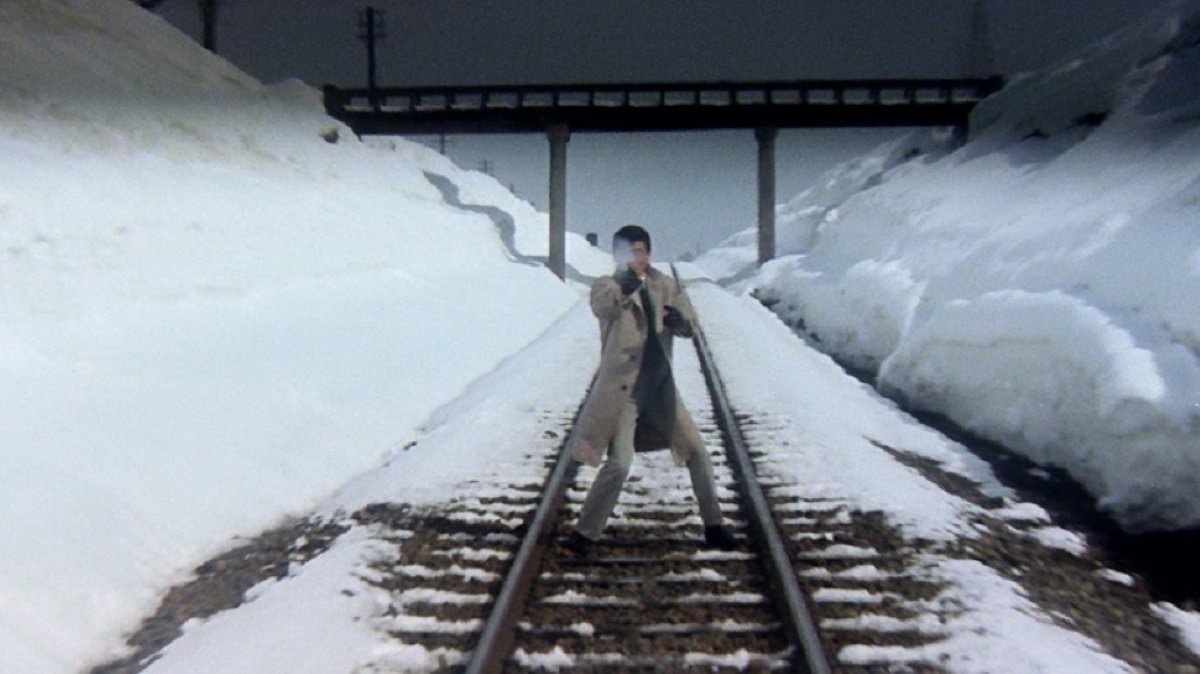 It opens on a gangland beating on the docks of the grimy waterfront, a dynamic widescreen image in stark, overexposed black and white. As a trumpet brays a tune that sounds like a nightclub version of a Morricone theme from a lost Sergio Leone film, hitman “Phoenix” Tetsu (Tetsuya Watari, looking like the young, Japanese pop-star incarnation of Alain Delon), the object of the abuse, refuses to lift a finger in his defense. But as the thugs leave he looks down at a toy gun, a single splotch of bright red in the gritty monochrome landscape, and mutters “Don’t get me mad.” Suddenly Suzuki blasts the screen with comic book color and pop-art hues.

Tetsu is a cool killer in dark glasses who provides his own theme song with a whistle that serves as both threat and melancholy regret for his actions to come. Call him the last honorable man in a world of shifting loyalties, a character who might have stepped out of one of Jean-Pierre Melville’s French gangster movies and into a delirious, color-soaked landscape of a Technicolor musical turned gangster war zone. When he discovers his own gang has betrayed his code of ethics, he hits the road like a questing warrior with not one but two mobs hot on his trail. The twisting narrative takes Tetsu from the seedy hideouts of the underworld to deliriously gaudy nightclubs to the beautiful snowy plains of Northern Japan and back again, leaving a trail of corpses in his wake.

Suzuki stylizes the entire film to the point of abstraction. Though rife with shootouts and fistfights, there is almost no blood in the film. Rather, Suzuki punctuates the imagery with slashes and splotches of red like drips in a piece of modern art.

With little money for sets, Suzuki turned studios spaces into strikingly austere suggestions of nightclubs (where killers hide behind every out-of-place roman column) and office spaces. The seasons change with capricious disregard to the calendar. Cameras looks down from the rafters or up through glass floors, creating vertiginous angles and impossible spaces. A clash in a club modeled on a 19th century saloon erupts into a comic barroom brawl right out of an American western spoof, with showgirls dashing bottles over the heads of the scuffling customers. A deadly showdown between “Phoenix” Tetsu and his deadly rival, “Viper” Tatsuzo (Tamio Kawaji), takes place in the margins of this slapstick interlude. It’s a pulp fiction on acid, equal parts gangster parody and post-modern deconstruction.

The Criterion Collection Blu-ray and DVD release features an archival video interview with Suzuki from 1997 and new interviews with Suzuki and assistant director Masami Kuzuu conducted from this release, plus a booklet with an essay by Howard Hampton.