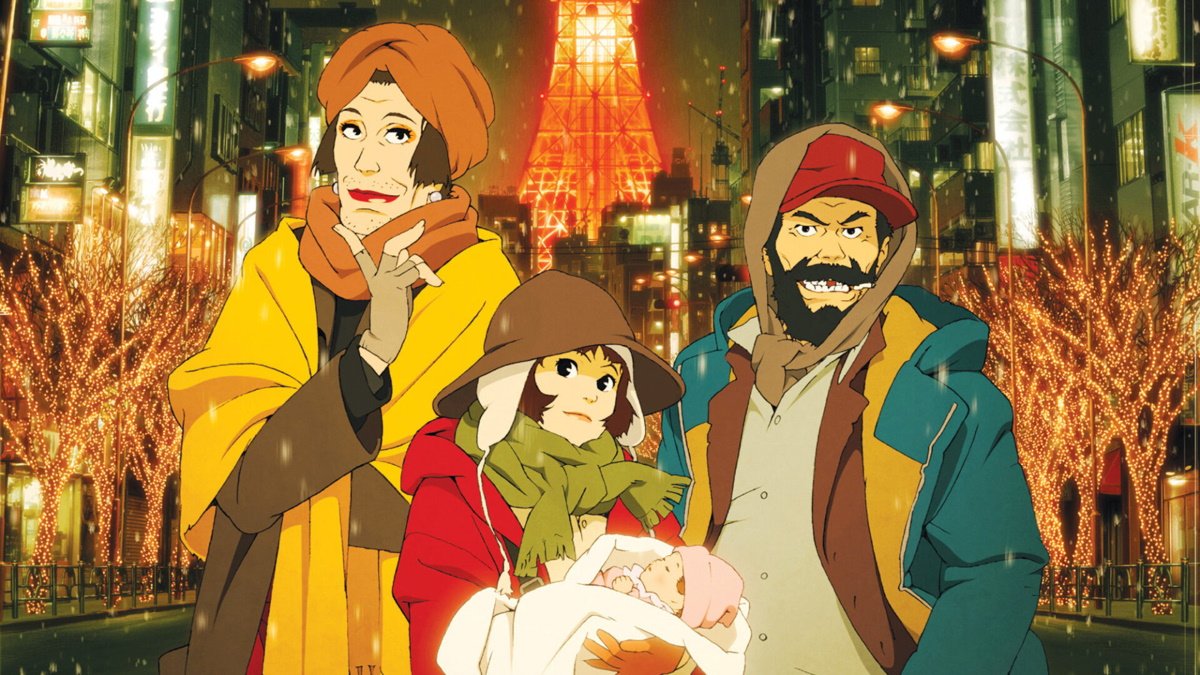 A Christmas fantasy set in the modern world of urban homelessness and social drop-outs, Satoshi Kon’s Tokyo Godfathers (Japan, 2003) is unusual even for Japanese animation.

It’s a modern take on the oft-filmed novel by Peter B. Kyne, a western about three outlaws on the run who come across a dying woman in the desert and vow to rescue her newborn. (John Ford’s Three Godfathers is the most famous version.) Kon’s tart yet sentimental remake turns the trio of cowboys into a makeshift homeless “family”—threadbare drag queen Hana, grumbling alcoholic Gin, and brooding, sassy teenage runaway Miyuki—who find an infant abandoned amidst a pile of refuse in a snowy alley on Christmas Eve.

Where Kon’s Millennium Actress used the strengths of animation to float its characters between reality and memory and imagination, this sentimental fairy tale with a socially conscience twist is more simple but almost as rich. Practical “angels” guide our homeless heroes through a harsh world where alcoholism and gambling addition are as real as mobsters and predatory teenage gangs.

Kon uses the animation to temper the “realism” with delicately textured images—streets blanketed in snow, hovels glowing in warm light, urban cityscapes softened by the lines of hand drawn animation—and he sends it bopping to a bouncy, jazzy score.

It’s not exactly for kids, but neither does it really fit the label of “adult” animation. Their odyssey takes the trio through to a mob wedding, a gangland assassination, a vicious teenage gang that preys on the homeless, and a drag bar. Yet it’s really a film about family, traditional and non-traditional. The miracles that this baby bestows on the trio can be explained away as coincidences, but the reunions and sacrifices are nonetheless healing and heartwarming.

Stream free on Hoopla, which is available through most public and college library systems.

The new Blu-ray+DVD edition is mastered from a 4K scan and includes an alternate English language soundtrack, three featurettes and a bonus short film by Satoshi Kon.