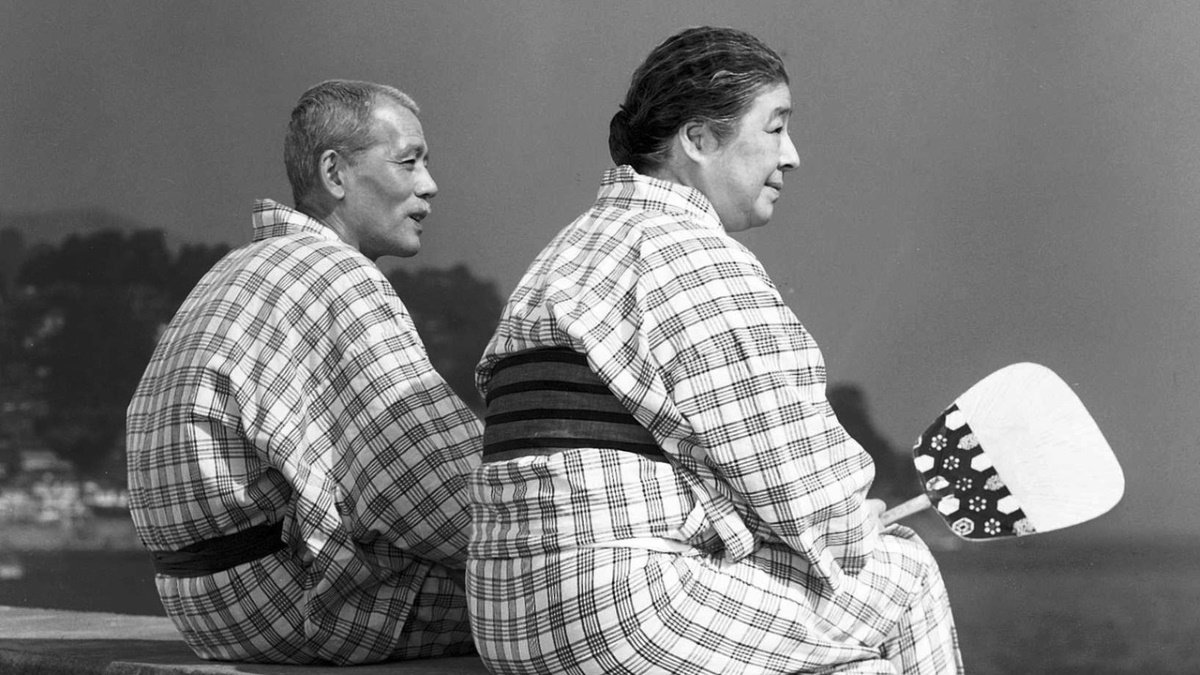 Tokyo Story (Japan, 1953) is perhaps the definitive film by Yasujiro Ozu, the artist called the most “Japanese” of Japanese directors.

Chishu Ryo (Ozu’s favorite performer) and Chieko Higashiyama star as an elderly couple in rural Japan who find a cold welcome waiting for them when they come to Tokyo to visit their two urbanized children, who are too busy with work and their own lives to pay them any attention. Within this simple framework Ozu creates a quiet but profound drama of the changing face of Japanese culture and the loss of traditional values in modern society.

There is a quiet, graceful formality to Ozu’s style, which focuses on the offhanded rituals and rhythms of everyday life. His camera is always still, putting a stage around the space where the drama plays out, and literally kneels to set every shot of home life about 36 inches from the floor, as if viewed from the position of a person seated cross-legged on a floor mat. It’s edited in a subtly off-center manner and paced at a placid tempo. These are formal elements in all of Ozu’s films made since the mid-1930s, and the themes of familial responsibility and sacrifice run through so many of his films, but rarely are they so gently resonant. This is a film executed with the sureness of a master at the peak of his powers.

But it’s also a resolutely modern portrait of post-war Japan, where western fashion defines the business culture and traditional dress is reserved for home, and careers and success increasingly dominate the lives of the rising generation. The painterly images bring the past and present together and the still life compositions have a serenity contradicted by the collision of cultures.

It is simply sublime, an elegantly realized world of dignity in the face of disappointment and loss, and one of the masterpieces of Japanese cinema.

It placed in the number four spot in the 2022 Sight & Sound Greatest Films of All Time poll.

Add to My List on HBO Max or to My List on Criterion Channel or stream free on Kanopy, which is available through most public and college library systems

The Criterion Collection Blu-ray+DVD Combo is mastered from a 4k film transfer and digital restoration and features commentary by Ozu scholar David Desser and three documentaries: the feature-length profile of the life and career of Ozu “I Lived, But” from 1983, the 40-minute tribute “Talking With Ozu” from 1993, and the 45-minute “Chishu Ryu and Shochiku’s Ofuna Studios” from 1988, all carried over from the previous DVD release. The accompanying booklet features an essay by critic David Bordwell (updated from the original version featured in the DVD release).