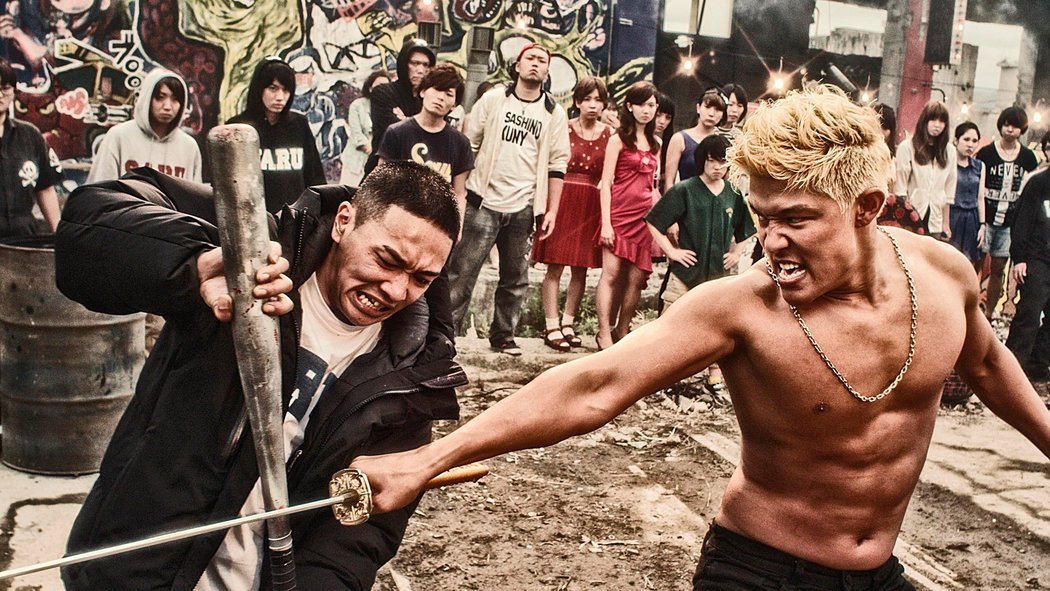 The films of Sion Sono, who is fast closing in on Miike Takashi as Japan’s cinema wildman rebel, are increasingly outrageous, unhinged, extreme, and unpredictable, pushing expectations as well as boundaries, and trying anything and everything in a wildly creative (if unfocused) attempt to refresh familiar genres.

Tokyo Tribe (Japan, 2014), adapted from a graphic novel series, is a comic book gang war thriller in an alternate future, part Blade Runner, part Escape From New York, part The Warriors, part Miike Takashi gangland freak show, part all hip-hopera musical on a studio soundstage like a golden age Hollywood musical. It opens with a long take and a traveling camera that follows our narrator up and down a long studio street as he raps the exposition—the Tokyo of the near future is divided into districts run by different gangs in a wary state of détente—and the film never leaves the insular atmosphere or the perpetual night of the studio-created city. And it never stops moving or rapping.

We jump through the main gangs with a quick introduction and get a thumbnail idea of the style of each fashion statement (each gang has its own, often elaborate tribal look, sort of like sports uniforms in the glam league). Then we come to Lord Buppa, the insatiable, possibly cannibalistic leader (he keeps severed human fingers in his cigar box) of a Yakuza-like organization who decides to wipe out the rest of the gangs and take over all of Tokyo for himself. He’s played by Riki Takeuchi, star of Miike’s Dead or Alive films, so we know he’s absolutely committed to extreme bloodshed. Instead of Miike’s trademark sadism and creatively explicit gore, however, Sono indulges in purely gratuitous nudity, foul language, schoolgirls in underwear, Takeuchi engaged in (non-explicit but still disgusting) masturbation, and constant sexual threats to young women. You know, like an adult manga with a juvenile attitude.

Among the victims is a giggly group of teenage girls scooped up Lord Buppa’s henchmen to fill in his ranks of sex workers (at least those who are not handed over to Buppa’s son to serve as his living furniture). There’s also a beat-boxing personal servant, a pair of kung-fu siblings, references to Scarface, Bruce Lee, and Kill Bill, and the most literal use of penis envy as motivation I’ve ever seen in a film. Packed with incident and movement and color, it’s a big, busy mess that is more overwhelming than thrilling or engaging, but you’ll see things you’ve never seen in American gang war movies and you won’t have a moment to catch your breath.

, iTunes, GooglePlay and/or other services. Availability may vary by service.
Tokyo Tribe [Blu-ray]

The Blu-ray and DVD editions from XLrator features no supplements.