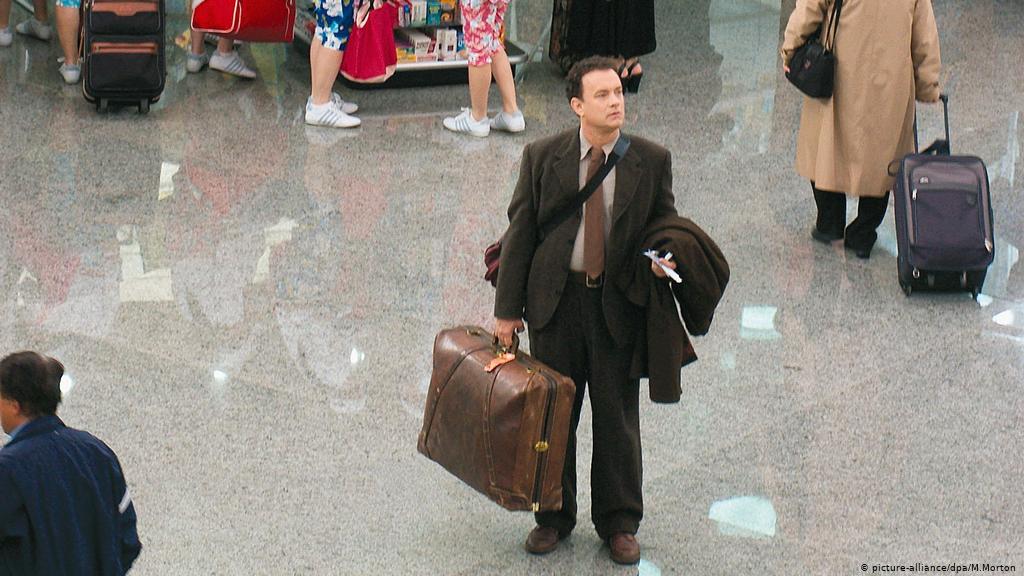 Tom Hanks winds up in the longest airport layover in the history of mankind in Steven Spielberg’s The Terminal (2004). He plays Viktor Navorsky, a traveler from the fictional Eastern European country of Krakozhia that, as fate would have it, dissolves between the time he boards his flight in Europe and arrives at JFK in America.

Suddenly in limbo thanks to a passport from a no-longer existing country, unable to either set foot outside of the airport or fly home, Viktor is a man without a country. Stanley Tucci is the cold, bureaucratic Homeland Security functionary who tries to trick Viktor into doing anything that would give him cause to deport him. Or at least make his somebody else’s problem.

But what could be a Kafkaesque nightmare is treated by Spielberg and screenwriters Sacha Gervasi and Jeff Nathanson as a space for the formation of a multicultural community of minorities and immigrants and working class folk who coalesce around Navorsky’s optimism and generosity. And Hanks is just the actor to carry it off. With his vaguely Eastern European accent and broken English (self-taught from airport paperbacks), Navorsky is a cartoon immigrant so invested with warmth and belief in the American Dream that he wins you over by sheer decency.

Catherine Zeta-Jones is a stunning flight attendant and bruised romantic who Viktor woos between her flights. Diego Luna, Chi McBride, and Kumar Pallana, and Zoë Saldana costar as airport workers who become Viktor’s friends and confidantes.

The Terminal is an impossibly romantic portrait of an immigration nightmare that becomes an irresistible fantasy thanks to the grace and compassion of Spielberg’s direction. Navasky turns his impersonal prison of waiting areas, fast food outlets, and consumer distractions into a community and a home by connecting to the people behind the service uniforms. His optimism is infectious.

Add to My List on Netflix or stream free on Hoopla, which is available through most public and college library systems

Also on Blu-ray and DVD and on SVOD through Amazon Video, iTunes, GooglePlay, Fandango, Vudu and/or other services. Availability may vary by service.
The Terminal [Blu-ray]
The Terminal [DVD]
The Terminal (Three-Disc Collector’s Edition) [DVD]

The Three-Disc Collector’s Set features a disc of supplements, including the featurettes Booking the Flight (the origins of the script), Waiting For the Flight (creating the set), Boarding: The People of the Terminal (the characters), The Take Off: Making the Terminal (the production), In Flight Service: The Music of The Terminal (with composer John Williams), and Landing: Airport Stories (the cast shares their airport anecdotes), a still gallery, production notes, bios, and a bonus CD soundtrack.