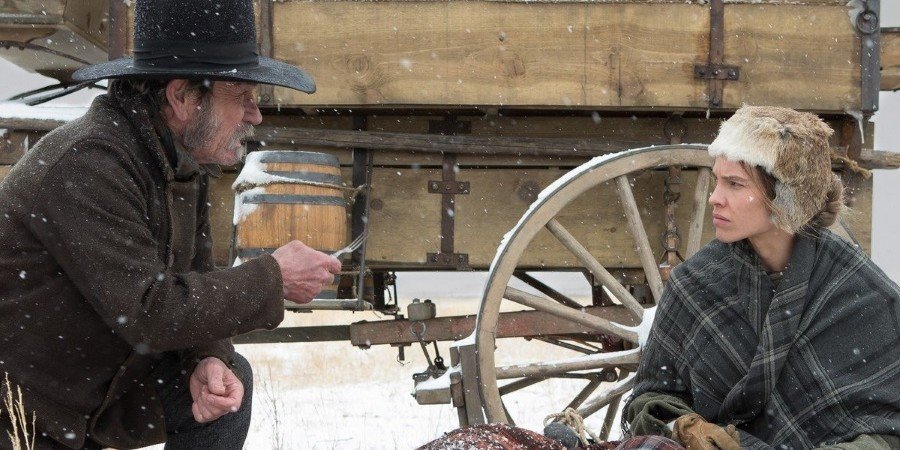 The Homesman (2014) was overlooked by critics in the rush to praise more conventional and less resonant films in 2014. It deserves a second look.

Tommy Lee Jones directs, co-writes, and stars in the film as George Briggs, a drifter saved from a lynching by Mary Bee (Hilary Swank), a tough, capable settler who has tamed her harsh Nebraska homestead and now sets out on an odyssey. She trades his life for help in transporting three women (Grace Gummer, Miranda Otto, and Sonja Richter) driven mad by life on the frontier to a town hundreds of miles away, where they have been offered care and sanctuary. It’s a western, sure, but certainly not in any traditional way. Adapted from the novel by Glendon Swarthout (who also wrote, among others, “The Shootist”), this story presents the West as a hard place that creates hard people and destroys the rest.

Jones is marvelous as the no-account whose word is secured through his greed but also rises to the occasion when necessary, but Swank dominates the film as Mary. She has carved out a successful spread but remains single and terribly lonely; she’s “too bossy,” says one of the few bachelors available on this vast sea of grass, scrub, and rolling hills. Her performance as a tough, driven, commanding woman cuts through the film like a knife. She was robbed of an Oscar nomination.

The film offers a landscape to match the emotional isolation; this land is as empty and lonely and unforgiving as it is lovely. There have been a lot of films about the costs and hardships faced by the first American settlers of the West, but they’ve all focused on the physical—violence, weather, shelter, food, the hardships of carving a home out of the wilderness. The Homesman looks at the toll on the heart and the soul and the psyche in a homestead miles from the nearest neighbor. It is a powerful film of elemental emotions and instincts, filled with eccentric and unusual episodes that straddle the fine line between humor and tragedy.

and other services and on disc:
The Homesman [DVD + Digital]