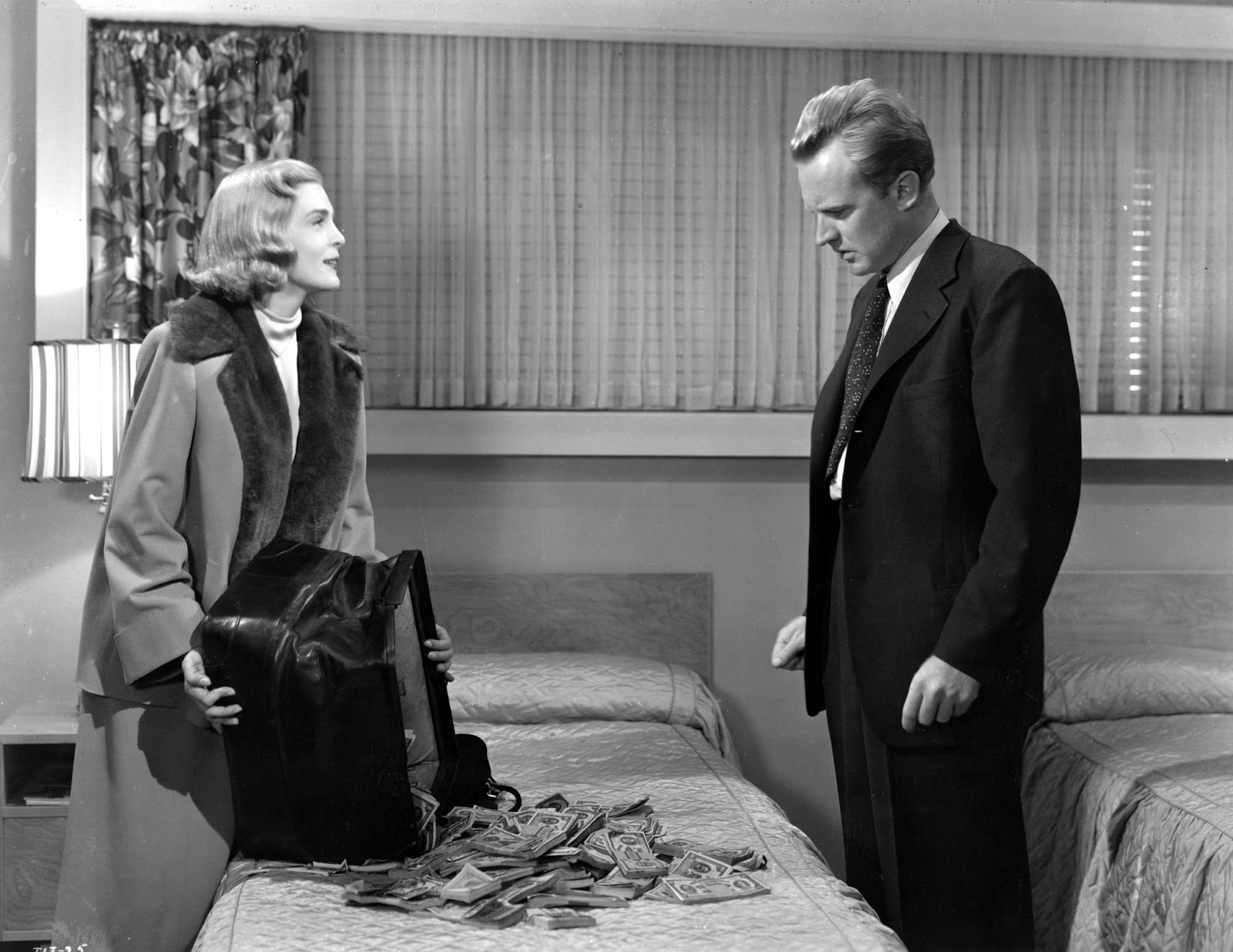 In Too Late for Tears (1949), Lizabeth Scott plays one of the most ruthless heroines in film noir, a status-conscious middle-class wife who will do anything to keep her hands on a suitcase of cash that lands in her lap by accident. Arthur Kennedy is her husband who wants to take it to the police but is tempted enough to hold onto it for a night or two (just to think over the ramifications, you know) and Dan Duryea is a mercenary crook who comes looking for the cash (payment in a blackmail scheme) and ends up her wary partner.

Scott has played her share of heroines and villains both but here she’s pure avarice and cold-blooded greed. She stares at the money piled on the bed with wolfish hunger and childish ecstasy and she’s ready to murder to keep it. The money doesn’t corrupt her, it merely unleashes her suppressed greed. She’s nervous and perhaps even reluctant to carry out the first one—fate steps in with a nudge when she hesitates—but she follows through without a regret and doesn’t even flinch the second time. Scott may be a poor man’s Bacall but is no man’s fool.

Duryea is in fine form as a weasel of an opportunist, sneering his dialogue in the early scenes and then slipping into disgust and drink as Scott slowly takes control of the partnership. In a genre defined by corrupt, ruthless, and conniving characters, this film features two of the most reprehensible and cold-blooded. Don DeFore is the old “army buddy” who hides his own secrets.

The budget went to the high-caliber stars, resulting in a somewhat starved production. The apartment sets are utterly bland and impersonal, almost generic, and Byron Haksin’s direction is perfunctory, as if rushed. The location shooting, however, is effective: the lonely roads in the canyons, the lake and the boat rental, the train station baggage check, and a few city street scenes. It’s a minor noir in the scheme of things but it has some major pleasure, not least of which are Scott’s utterly rapacious turn and Duryea as a sleaze who is appalled at depths of her amorality.

The film fell into the public domain and has been available in poor quality editions for decades. It was restored in 2016 by the Film Noir Foundation and UCLA Film and Television Archive. We only list high quality editions at Stream On Demand.

Also on Blu-ray and DVD and on SVOD through Amazon Video, iTunes, GooglePlay, Vudu and/or other services. Availability may vary by service.
Too Late for Tears [Blu-ray+DVD]

The film was produced independently of the Hollywood studios and fell into the public domain years ago, which meant that no one was looking after the film’s elements but plenty of labels putting out inferior versions from whatever battered TV print or video copy they could get their hands on. The Film Noir Foundation produced a restoration with UCLA Film and Television Archive, with support from the Hollywood Foreign Press, from an archival 35mm re-release print and a complete 16mm print. It shows minor wear and light scratches but is otherwise undamaged and a massive improvement over previous editions, with a solid, crisp image with strong (maybe too strong) contrasts and vivid detail. This is the definitive edition by a huge margin.

The set features both Blu-ray and DVD editions of the film, both with commentary by film noir historian Alan K. Rode (who gives us the histories of the players along with production details and critical observations), the 16-minute “Chance of a Lifetime: The Making of Too Late for Tears” with film noir historians Rode and Eddie Muller and film critics Kim Morgan and Julie Kirgo, and the shorter “A Wild Ride: Restoring Woman on the Run” with Muller and film archivist Scott McQueen, plus a booklet with stills, artwork, and an essay by Eddie Muller.