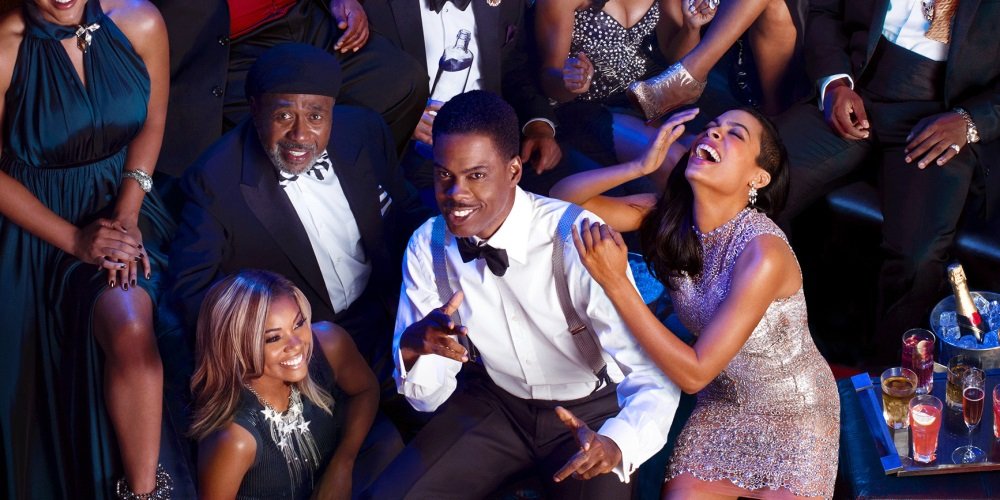 Top Five (2015) is Chris Rock’s third film as a writer / director and his most personal.

Rock plays a comedian named Andre Allen, once branded “the funniest man alive” for his electric stand-up act. His career took a turn when he made a fortune in lowbrow comedies and bottomed out in alcohol and he wants to remake himself as a serious actor in his sobriety, which is hard to do when his upcoming marriage is little more than a reality TV stunt as far as his fiancée (Gabrielle Union) is concerned. It all plays out in an eventful 24 hours in NYC as a reporter (Rosario Dawson) tags along his errands and interviews on the opening day of his new film, a stiff of a well-meaning historical drama called “Uprize!,” and the day before his wedding, an affair more stage-managed than planned.

It’s very funny—Rock channels the uncensored language and subject matter of his stand-up act, which lands the film in decidedly R-rated territory—with a serious undercurrent. He’s a recovering alcoholic who’s afraid he’s no longer funny sober, with a career on life support and a marriage he now seems to dread. Dawson, one of the most underappreciated actresses around, matches Rock with confidence and intelligence as the journalist who pushes the comedian to be honest with her—and ultimately with himself.

It’s got an episodic structure, dotted with flashbacks (Cedric the Entertainer takes a starring role in “the lowest moment of his life”) and meetings with old friends (among them Sherri Shepherd, Jay Pharoah, Leslie Jones, and Tracy Morgan) and comedy colleagues. Rock lets these moments reveal different dimensions of the man behind the persona, while generously letting them show off their chops. It’s a familiar structure that Rock juggles well and fills with sharp, smart, and often hilarious take on the mid-life crisis of an artist caught between public expectations, private ambitions and anxieties, and professional compromises and commitments. There’s a complex understanding of the business of entertainment and celebrity behind the comedy, and a smart character portrait behind the performance.

Also on Blu-ray and DVD and on SVOD through Amazon Video, iTunes, GooglePlay, Fandango, Vudu and/or other services. Availability may vary by service.
Top Five [Blu-ray]
Top Five [DVD]