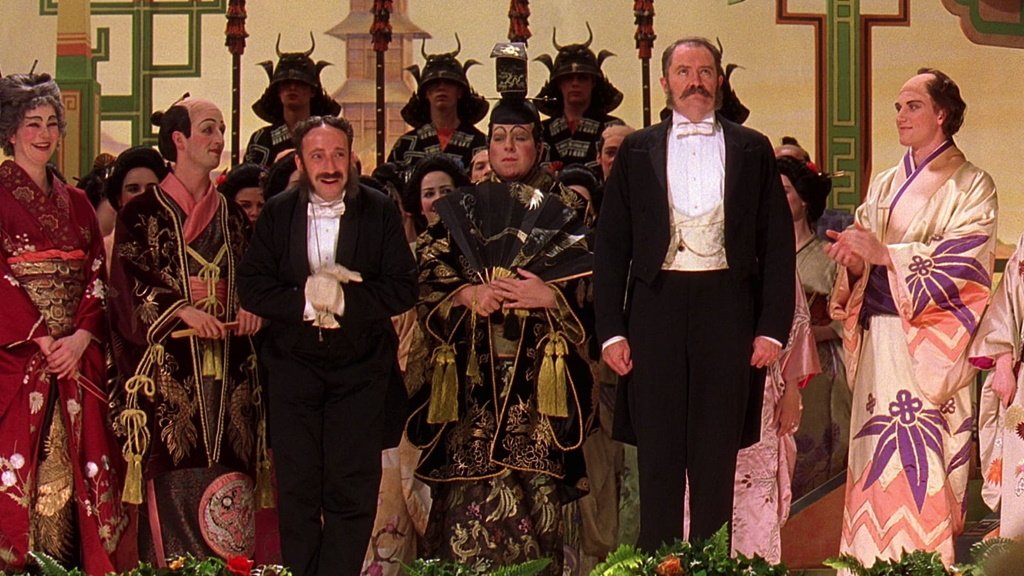 Set in the world of London theater in the mid-1880s, Topsy-Turvy (1999) tackles the creative partnership between W. S. Gilbert and Arthur Sullivan, the reigning kings of light operetta, at a turning point in their career. Their work has become repetitive, their latest show a disappointment, and the partnership is under strain as composer Sullivan (Allan Corduner) yearns to make more “serious” work. And then Gilbert (Jim Broadbent), the librettist and lyricist, find inspiration in the culture on display in London’s Japanese Exhibition. Almost in spite of himself, he is inspired to create something not just a new story but an entirely fresh, exotic world of characters and colors and cultural wonder, and the excitement reverberates across the company and into the marrow of what we see turn into the team’s most successful production ever: “The Mikado.”

It’s Leigh’s most sprawling production and his most disciplined. He explores the culture of theater and the theater business from the top (where Gilbert and Sullivan live large on their enormous success) to the workaday world behind the scenes at the Savoy Theater, and weaves the stories and personalities of dozens of characters through the drama on and off stage, giving everyone their moment to shine within the ensemble. There are too many to them out by name, but particularly notable are Timothy Spall as Richard Temple, a comic specialty player and audience favorite whose larger-than-life portrayals hide a vulnerable man, and Shirley Henderson as the company ingénue, a single mother with a drinking problem who has given up on romance rather than face rejection.

Topsy-Turvy is ultimately a study in the act of creative collaboration, illustrated through the development a single production from inspiration through rehearsals to performance. It’s not a simple, idealistic portrait of benevolence and the healing power of art to overcome all. The business of theater is never far from the art and more than one member of the troupe is carried along by one addiction or another. Yet it is ultimately a bright, densely-detailed delight of creative inspiration, backstage theatrical soap opera and 19th century British culture, and Altman-esque canvas painted in the shades of Leigh’s own sensibility. Topsy-Turvy brings a freshness to the formality of 19th century decorum and conventions and an artist’s appreciation to the challenges of creative work and the dynamics of personality and creative strengths between collaborators.

It won Academy Awards for costume design and make-up and two additional nominations, including one for Leigh’s original screenplay.

Criterion’s two-disc DVD and single-disc Blu-ray release, in a director-approved digital transfer supervised by cinematographer Dick Pope, features commentary by director Mike Leigh (originally recorded in 1999 for the film’s initial DVD release), a new video conversation between Leigh and Gary Yershon (the film’s musical director), Leigh’s 1992 short film “A Sense of History” (written by and starring actor Jim Broadbent), an archival featurette from 1999 that includes interviews with Leigh and his stars, and four deleted scenes, plus a booklet with an essay by Amy Taubin.