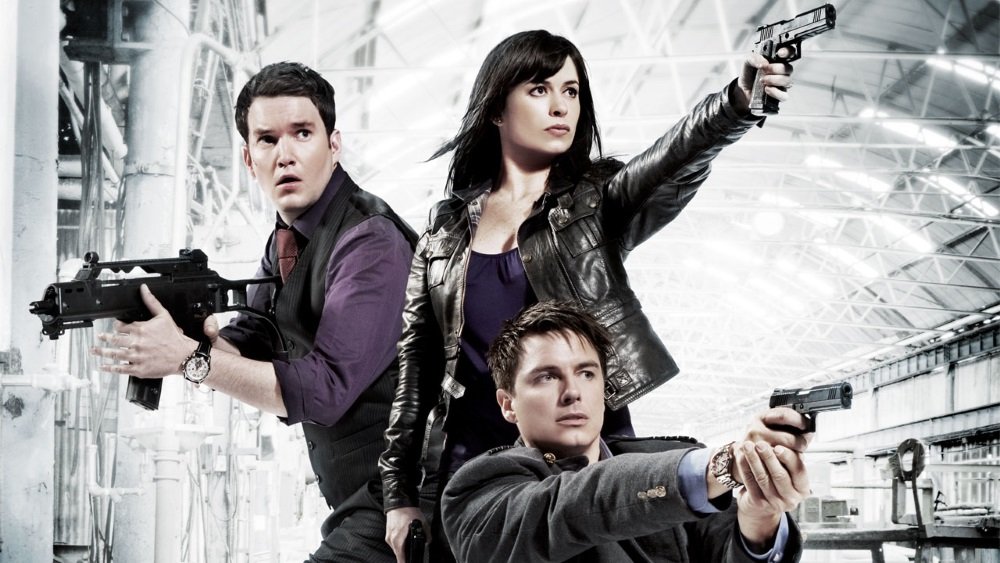 Torchwood began life as a spin-off of the Russell T. Davies Doctor Who reboot (note the title is an anagram of the original series) for a more adult science fiction audience. Former Doctor Who confederate Captain Jack Harkness (John Barrowman) takes the lead in what begins as a high-energy goof on X-Files featuring a British special cases squad of energetic young agents with more energy than experience and a high-tech equipment locker that has everything but an instructions booklet. And there’s a nod to Buffy the Vampire Slayer with the idea that their Cardiff HQ is located on the “Rift,” sort of a cosmic Hellmouth of converging lines of dimensional energy that brings bout space travelers and dimensional warps.

This group is making it up as they go along, as beat cop Gwen Cooper (Eve Myles) discovers when she stumbles upon their activities and exhibits enough spunk to get recruited into the crew, and the show takes its time finding its footing and its sensibility. The rubber-mask aliens and techno-toys are right out of the Doctor Who playfulness while the show adds a darker tone (a lot of people die, some quite violently, through the course of the shows) to its brightly colored adventures. And give the show credit for offering TV’s first out-and-proud bisexual action hero, a revelation that neither defines nor redefines him as much as it simply adds another piece to his mystery. The guy is eternal and, as we come to know, as tortured and tormented a guy as we’ll meet.

It’s fair to say that show really came into its own with the third series Children of Earth, a five-part mini-series within a series (which originally played over five consecutive nights on British TV and BBC America) with a scope that recalls the Quatermass shows and a creepiness that echoes Children of the Damned. It opens with every child on the face of the Earth pointing to the sky and chanting in unison “We are coming” while the government immediately sends a hit squad to kill the Torchwood team, and it gets darker from there. While he and his team fight to save the children of earth from a truly horrific fate, we discover just how much Captain Jack has suffered and sacrificed through his gift/curse of eternal life: he’s an immortal with the trials of Job and the torments of Prometheus. Creator/writer Davies doesn’t take any prisoners in this production.

Torchwood returned with one more series co-produced by the BBC and the Starz Channel, which broadcast the show stateside. Miracle Day sends Captain Jack and Gwen—the last surviving members of the Torchwood team—to the United States to track the “miracle” of the title. One day, people suddenly stop dying, and it very quickly transforms from miracle to curse, as the diseased, the dying, the critically injured, and others are forced to endure the pain of living through death. In fact, the only person left mortal is the formerly immortal Captain Jack. It’s a solid story with some brilliant turns and some very pessimistic predictions of how the world faces a health crisis of overwhelming dimension, but it also feels stretched out beyond its natural length. Given that, it was still daring science fiction TV at time when it was still relatively rare.

BBC teamed up with the Starz Channel and the cast is filled with American faces: Mekhi Phifer and Alexa Havins as American agents who team up with the Torchwood crew, Bill Pullman as a murderer on Death Row when such a thing no longer has meaning, Lauren Ambrose as an image management consultant who signs on to the highest bidder, and Wayne Knight, Dichen Lachman, Nana Visitor, and John de Lancie in small roles.