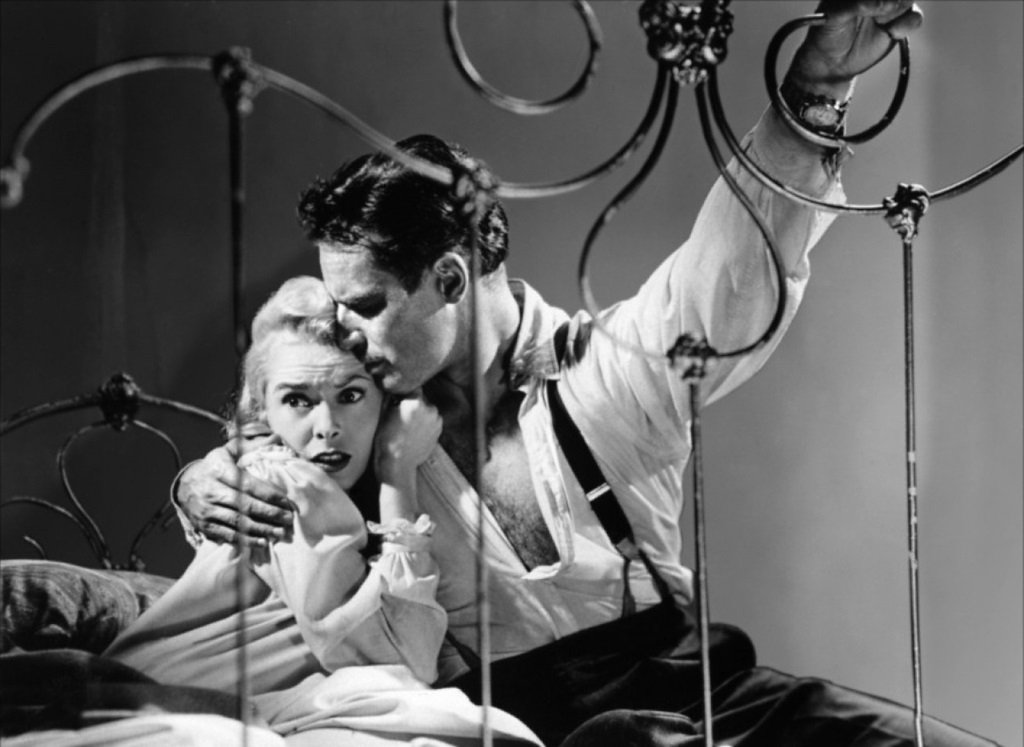 Orson Welles’ baroque border town murder mystery Touch of Evil (1958/1998) is a wild masterpiece, a sleazy, grimy, jittery, and ultimately dazzling work of cinematic magic. It’s considered the last great film noir and the bookend to the true noir era. It was also Welles’s last attempt at a career in Hollywood before he packed up to make movies in Europe.

Charlton Heston is a stiff, straight-arrow Mexican government agent Mike Vargas whose planned honeymoon with his American bride Susie (Janet Leigh) is derailed by a sensationalistic murder and police detective Hank Quinlan (Orson Welles), a bloated, blustery grotesque with a doughy face and an ill manner who has a habit of creating evidence to speed the process of justice. An instant antagonism develops between the educated Vargas and the misanthropic Quinlan which intensifies to a rabid hatred when Vargas uncovers evidence that Quinlan has framed a suspect and pursues his own investigation.

It features Akin Tamiroff as a Mexican border town Little Caesar with a cheap toupee and a wise-guy patter, Dennis Weaver as a sex-obsessed motel clerk on the verge of a nervous breakdown, a guest appearance by Marlene Dietrich as a world-weary bar owner and fortune teller, and cameos by Welles regulars Ray Collins and Joseph Cotten.

Universal Studios wanted a routine crime film with star glamour and an uncomplicated happy ending. They ended up with a grandiosely bravura B-movie crime opera. The film opens on arguably the most famous long take in film history, an elaborate crane shot that begins in close-up (of a bomb, no less) and then rises above the streets of a Mexican border town to watch the trajectories of a car (which is carrying the bomb, unknown to the passengers) and a couple winding through the sleepy streets, and then is broken with a sudden cut to an abrupt explosion that kick-starts the murder mystery. From this point, Welles’ styles becomes more expressionistic with looming low angles, jittery handheld shots, and edgy editing. Always the innovator, Welles encouraged the then-unknown composer Henry Mancini to score the film with a wildly unconventional mix of growling rock and roll and Latin-influenced sounds, which add to the film’s nervous energy as the battle between Vargas and Quinlan becomes personal and gets vicious.

Touch of Evil is a portrait in corruption and racism in a grimy, tawdry bordertown netherworld straddling a kind of moral no man’s land between Mexico and the U.S.. This was a border where the edges blur with all the crossings back and forth (it could only have been done in an era before 9/11), and populated with a gallery of grotesques and eccentrics. It is pure Welles, even in its compromised version.

The film was taken from Welles’ hands and re-edited by studio cutters in a 96-minute version without the involvement of Welles. That version was released to the theaters in 1958 and was all we had until a longer preview cut, running 108 minutes, was found in the Universal vaults. It subsequently replaced the shorter cut in most repertory screenings and on home video.

Decades later, a unique kind of restoration was undertaken, guided by a detailed 58-page memo that Welles sent to Universal executives with recommendations on revisions to the rough cut. Those changes were incorporated into a 1998 revised edition. It’s not a director’s cut in fact or in intention, but it is the closest we’ll ever come to seeing Orson Welles’ best compromise in his final attempt at making his kind of film in the studio system. It may be the ultimate act of artistic fealty in film history: an honest and honorable attempt to finish the film as it could have been.The result was a revelation: Welles was right. His suggestions do make it a better film.

I wrote in more detail about the history, making, and revising of Touch of Evil for Parallax View here.

The original version was added to the National Film Registry in 1993.

Originally not rated, it received a PG-13 rating on the release of the 1998 revision.

Also on Blu-ray and DVD and on SVOD through Amazon Video, iTunes, GooglePlay and/or other services. Availability may vary by service.
Touch of Evil: Limited Edition [Blu-ray]

Universal has released the film in deluxe special editions on both Blu-ray and DVD featuring all three existing cuts of the film. It is a package worthy of Criterion. It’s been remastered from original 35mm elements for Blu-ray and looks amazing, and it features the four commentary tracks spread over the three versions recorded for the DVD set. Project producer Rick Schmidlin hosts a track with stars Charlton Heston and Janet Leigh, with Schmidlin commenting on the changes in the “restored version” and drawing production stories and experiences from the stars, and he also contributes a solo track, both for the reconstructed version. Welles historian / project consultant Jonathan Rosenbaum and fellow Welles historian James Naremore discuss the “preview version” with a mix of production details and interpretations, and film critic F.X. Feeney offers a solo track on the shorter theatrical release. Also includes the featurettes “Bringing Evil to Life” (one on the making of the film) and “Evil Lost and Found” (on the history of the various versions and the process of reconstructing the new cut) and a reproduction of the original 58-page memo that inspired the entire project. Also features an UltraViolet digital copy for download and instant streaming.