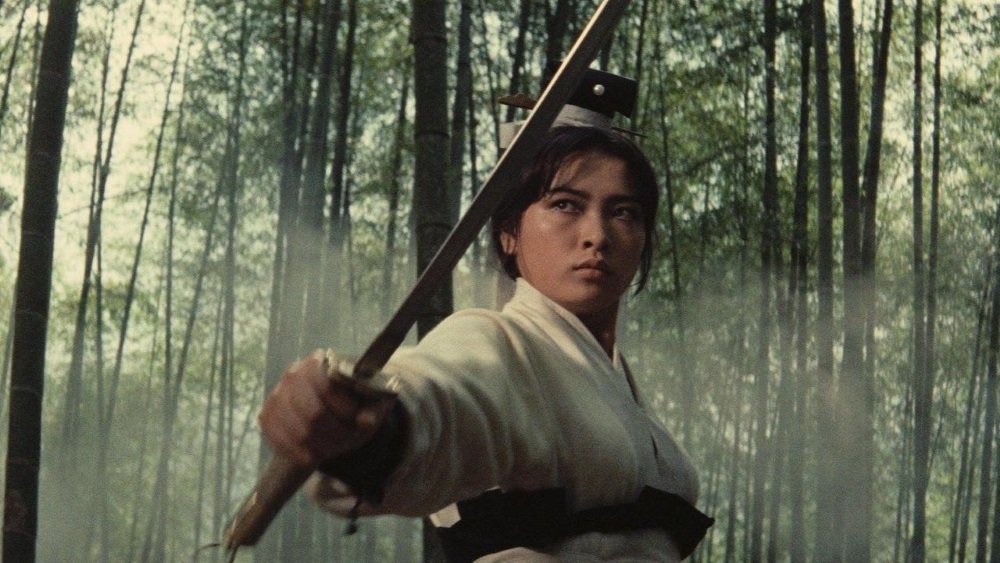 A Touch of Zen (Taiwan, 1971), King Hu’s romantic chivalry adventure, is a masterpiece of Chinese cinema, a magnificent epic with grand battles fought with the grace of a ballet with swords, and the most significant cinematic inspiration for Ang Lee’s Crouching Tiger, Hidden Dragon. The three-hour film took the uniquely Chinese genre of wuxia pian (literally “martial chivalry”), a genre Hu practically defined with Come Drink With Me (1966) and Dragon Gate Inn (1967), into the realms of poetry and epic adventure. 45 years after its completion, A Touch of Zen has been restored and it is as glorious and grand and dreamily beautiful as ever.

The very opening tells you that this is something different, from the ominous spiderwebs stretched across the dark to a sunrise over the mountains of the rural inland in a remote part of China. There’s six or so minutes of scene-setting, glorious images and music that flow with a sense of grace, before we see a sign of civilization. It’s almost like an intrusion on the purity of this world. Almost. That same slow, sublime storytelling continues as a poor but honorable scholar, Gu (Chun Shih), sets up his shop and welcomes a stranger, who sits for a portrait and asks about some of the recent arrivals in this remote village. When the stranger slips away to follow one of these newcomers, we observe the trajectories of the followed and the followers and see an intelligence network of spies and agents emerge from the lazy rhythms of the sleepy town square. Every new arrival adds to the web, especially a young woman, Yang (Feng Hsu), who moves into the haunted manor next door and a blind beggar (Ying Bai) who suddenly seems to be everywhere.

What begins as a conspiracy and ghost story becomes an ingenious game of tricks and traps sprung in the dark (revealed the next morning in a brilliant scene that instantly transforms a bloodless fantasy and triumph into a shocking confrontation of the brutality of battle) and transforms through floating, leaping, airborne fights into one of the most beautiful martial arts movies you’ve ever seen. Yang is actually a noblewoman on the run from the forces of a corrupt Eunuch, forces that soon enough arrive and inspire Gu to offer his services to Yang and her protectors. Not as a fighter—he’s a scholar, not a soldier—but for tactics and intelligence. Yang, however, is most definitely a fighter, a master martial artist trained in a Buddhist temple who all but flies through the air. When the first battle begins (more than an hour into the film) she and her guardian General dance on the leaves of branches. The promised touch of Zen is introduced by a brotherhood of Monks dedicated to defending the innocent with nothing but bare hands against swords. The acrobatics are more balletic and graceful than athletic: our heroes jump (with the help of hidden trampolines) and somersault through the air, leap up trees and over walls, and land as if floating like a feather to the ground.

Hu accomplishes it through editing and camerawork—this is before the advent of wire-work and digital effects—and a dramatic sense of dynamic composition. The colors are delicate, like they’ve been painted, and the atmosphere is painstakingly created with mist and falling leaves and sunlight that floods the lens and darkness that shrouds the visual world in shadow. Yet even in its most spectacular action Hu creates a sense of serenity and wonder. A Touch of Zen flows like a lazy river with a swirling undertow just beneath the placid surface, and the camera floats along it.

It took two years to complete and was a financial failure when the producers (wary of the way Hu shifted from action spectacle to arthouse grace) released the film in two parts in 1971, and then won an award at Cannes when Hu’s complete cut was screened in 1975. It is now hailed as a masterpiece of Chinese cinema.

Martial arts movie fans take note: look for Sammo Hung, long before he made his fame, appear in the second half in a wordless role as a warrior in yellow robes.

and other services. Availability may vary by service.
A Touch of Zen [DVD]

A Touch of Zen [Blu-ray]

The film was restored in 4K by the Taiwan Film Institute and L’Immagine Ritrovata from the 35 mm original camera negative, a painstaking process of going frame by frame to eliminate stains and spots (some artifacts, possibly tracing back to original negative processing, are still visible), repair tears, and remove splice marks. The restoration was funded by actress Hsu Feng and cinematographer Hua Hui-ying supervised the color grading. Criterion masters their release from this restoration and the results are breathtaking, with intense colors and glorious images.

On Blu-ray and DVD with the 47 minute documentary King Hu: 1932-1997 produced in 2012 for French TV (though it is mostly in English and Cantonese) and new interviews with actors Hsu Feng (13 mins) and Shih Chen (17 mins), who had both appeared in Hu’s earlier Dragon Gate Inn (1967), filmmaker Ang Lee (13 mins), who talks of the film’s legacy and how it inspired Crouching Tiger, Hidden Dragon (2000), and critic and Asian film historian Tony Rayns (34 mins), plus a fold-out insert with an essay by film historian David Bordwell and notes on the film by King Hu.